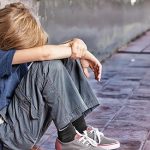 Standing up for his son

Eleven-year-old Ty Field-Smalley took his life after being harassed at school. Ever since, his father has made it his mission to fight bullying.

On a Thursday afternoon in May 2010, shortly after his mother dropped him off at home from school, Ty Field-Smalley, who was 11 years old, took his own life. He was only a week away from completing sixth grade. “We buried Ty May 17, 2010,” says Kirk Smalley of his son, who had been relentlessly bullied by the same boy at school for two years.

Ty’s bully ended up serving only one day of his three-day suspension, the first and only time he was punished by the school for harassing Ty.

The following Monday, after Ty had committed suicide, the bully “went up to a little girl and said that Ty died because of her,” Smalley says. “Then she tried to go home and kill herself. The first day of school this year, the year after Ty died, the same little boy walked up to my son’s best friend and said, ‘I took care of one of you. Now let me see what I can do about you.'”

Not only is Ty’s father counting every day since he lost his son, but he has devoted himself to working for Stand for the Silent, a non-profit anti-bullying organization created by students in honor of Ty. “I’ll fight bullying wherever it’s found,” Smalley has vowed. “Schools. Workplace. I’m not going to quit until bullying does.” Since Ty’s death, Smalley, who is from the small town of Perkins, OK, has spoken at more than 100 schools and addressed well over 100,000 children. He teaches the life-and-death consequences of bullying with testimonials, videos, and role-playing activities.

He’s determined to save other children from such an unthinkable fate, and spare their parents such unimaginable misery. “If his mother, Laura, or I had any notion Ty would have done what he’d done, we would have done anything necessary to save him,” Smalley says. He and his wife did what they could, including “constantly” going to administrators, begging them to do something to help Ty — to no avail. “Laura says she would have yanked him out of school. But this is a tough one. You can’t run away from bullies all your life — there are bullies everywhere you go. Let’s pull the bully out of school.”

“We taught Ty to stick up for himself,” Smalley says, “but he never would. He was the smallest guy there was, but he’d stick up for other kids. There was another little kid, an American-Indian boy, who got picked on a lot. Ty would stick up for him and so the bigger boys would beat Ty up and leave the boy alone.”

Finally, Ty had enough and he stood up for himself. He fought back, and when he did  both he and his bully were meted out the same punishment: suspension from school. This common practice, called a “no-tolerance” or “zero-tolerance” policy — which holds any child who is involved in an altercation responsible — sends the wrong message to a bully’s victim, says Smalley. “Don’t suspend children for being victims.”

Ty was crushed by the suspension, says Smalley. The first time he ever defended himself, he was punished. Hours later, Ty took his life. “If someone on the street comes and jumps at you, you have to protect yourself. It’s ridiculous that the schools don’t have to follow the same rules and laws that our society does,” Smalley says.

Never hold the victim responsible for being bullied, he says. “They should tell the child, ‘You’ll be protected,'” not ask, as Smalley says the principal did at Ty’s school, ‘What did he do to get picked on?’ That happens a lot,” adds Smalley, who is adamant about not bringing the bully and victim together to resolve the problem, another regular practice at schools.

“Now the victim has to confront his tormentor face-to-face. That’s so hard for a child to do. First, they are terrified. They know if they tell what’s really happening, what’s really going on, the bully will catch him in the playground and he’ll pay the price. So the victim goes into the office and lies and says, ‘He was just teasing me.’ Bullies are smart. They get [grown-ups] to believe it’s the victim’s fault.”

More than the bullies, who Smalley points out are children themselves, he believes their parents should be held most accountable. “A bully’s parents tend to be bullies,” says Smalley, who adds that he’s never met the bully’s parents, nor have they ever approached him to talk or apologize — even after Ty died.

“Policies on bullying don’t work,” Smalley says. “Those are just pieces of paper, and if you ask a school about their bully policy, most schools don’t even know if they have one. We need legislation that holds parent accountable for their kid’s actions, that gives the schools an out if a child is being bullied so you can tell a bully’s parents, ‘You have two weeks to make a change in that kid’s behavior.’ If that doesn’t change, you give [the parents] a warning. Then you fine them. If it’s the fourth or fifth instance, they maybe you send [the parents] to jail for a few days.”

Smalley and his wife, Laura, appear in Bully, a documentary about kids being bullied in America. (Read our review of Bully here.) Smalley comes across as a calm, dignified, and grief-stricken father who is not out for revenge or retribution — he isn’t suing the school district or the bullies’ parents — but he is steadfast in his crusade to fight the negligence, cruelty, and destructive rationalizations that perpetuate a culture of bullying.

“We got the answer that boys will be boys, that bullying is just a childhood rite of passage. That’s not true. It’s that way only because we allow it to be that way.”