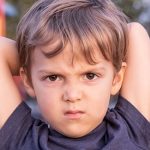 Your kindergartner and anger

When little kids have big feelings, here are 4 steps parents can take to help them feel better now and in the long run.

Before Alyssa became a mom, she was sure she wouldn’t have one of those out-of-control children who threw tantrums. “I would see other people’s kids act out and I would think, ‘Dude, I’m never going to have kids who act like that.’” Now that she has twin 5-year-old sons, Alyssa can only laugh at her certainty that her children would always be well-behaved and happy. Yes, she says, her sons Parker* and Mason* are usually kind, good-natured boys. But there are also times when they lose their tempers in epic proportions, sometimes for seemingly small reasons. “I’m surprised what can trigger their anger,” says Alyssa. “And I’m also surprised with how angry a little human can become.”

It’s especially bad this year. “I don’t know if it’s their age or the pandemic,” but now that they’re kindergartners, she says her sons erupt more easily and often. If her work runs late and throws off their Mommy-time schedule, Alyssa says “the breakdown that happens for Mason is apocalyptic.” As for Parker, “His anger is really intense right now. He almost vibrates with rage. Sometimes he’s building a structure, and if it doesn’t hold up, he’ll take the magnet tile and bite it and then starts screaming.”

There are times, Alyssa admits, that she wants to scream, “Stop screaming!”

Look at anger in kindergartners as a “cover emotion”

Positive discipline experts urge parents to look behind your 5-year-old’s pouting and raging to ask why they are acting out. Why? Because when you focus on the anger, you miss the opportunity to attend to the feelings fueling the anger. “Parents will be most effective when they put on their detective hats and try to understand the belief behind the behavior,” explains Jane Nelsen, author of the Positive Discipline series.

Regardless of how angry your child is, one of your best strategies is to identify what feeling your child is covering up, explains Nelsen. Your child might be feeling shame or rejection or anxiety. Inside that tantruming kindergartner is a frustrated, sad, tired, lonely, or frightened 4-, 5-, or 6-year-old. Most often, it’s a young child whose big feelings are overwhelming, confusing, and scary. Parents can help by helping their young child discover — and understand — their underlying emotions.

Nelson encourages parents to meet anger with curiosity rather than with admonishments or punishment. Maybe your kindergartner threw a fit at home because they were rejected by kids at school. Or they forgot to do a chore and think their parents will be mad. Maybe they’re just overtired or hungry. Does your kindergartner explode in a rage when it’s past their bedtime? Could they be “hangry,” something a healthy snack could remedy? Nelsen says that by “focusing on solutions, not punishments” in the face of strong emotions, parents can help kids learn how to self-regulate, a skill that helps for a lifetime.

Let your child have their feelings

The next step, say positive discipline experts, is to realize that anger, like all emotions, isn’t “bad.” It’s part of the human condition. Kids this age are going through dramatic social, emotional, and cognitive growth and that means they’re dealing with a lot of big and confusing new feelings. “Outbursts are developmentally normal. And kids get stressed out just like adults do,” says Dr. Nanika Coor, a Brooklyn-based clinical psychologist who specializes in working with parents.

A parent’s impulse is often to do everything to squelch a child’s anger, but kids need to express themselves, says Nelsen. “It’s so disrespectful to not let people, our children included, have their feelings.”

Coor agrees. “If the child is younger than 7, it’s developmentally normal for their emotions to take over. If you’re dealing with a young child, sometimes the best thing is to just be with them and let them be angry.” In fact, giving your child a safe space to be angry can help them feel less angry in the long run. Why? “Kids who feel seen and heard feel understood. It also helps them feel safe because they aren’t worried their parents will reject them if they are feeling bad.”

While letting your child have their feelings, it’s important not to let them hurt themselves or others. “The adult needs to be their emotional regulation at those times and keep people and property safe,” says Coor. “Physically block them from hitting. If you know they are throwers and might break or throw things, you can make sure breakable or blunt objects are impossible for them to get their hands on for as long as they’re in the throwing stage.” The good news, says Coor? Young children usually grow out of such physically rageful fits.

“You can’t punish away feelings,” says Coor. “Punishments — whether criticizing, shaming, blaming, yelling, or giving the silent treatment — teach kids not to trust their parents with their mistakes.”

Though it may seem counterintuitive, empathy is far more effective. “Meeting a child’s intense emotions with empathy lets them know that you understand how hard it is for them at that moment,” says Nelsen. She suggests using empathetic words and helping kids learn to identify and name their emotions. For example, I see that you’re upset, and I’m sorry. I love you. Can you tell me what you’re feeling? I’m here to listen. Would you like a hug? I’m here when you’re ready for one. Shall we take a time-out together and you can tell me what you’re feeling? Although it may seem simple, teaching a little one words like mad, sad, frustrated, worried, nervous, scared, overwhelmed, tired, impatient, alone, left out, etc. can go a long way toward helping kids identify and understand their emotions. It’s a technique that will help them build their emotional intelligence now and in the long run.

The goal is to create a safe space for your kindergartner when they have overwhelming feelings and help them learn to process their feelings on their own as they grow up.

The first few times the parent asks, a child may not know or be able to articulate why they lashed out in anger. But kindergartners can be good problem-solvers. Alyssa talks with her sons as often as possible when they’ve let their anger get the best of them. “I’ll say, ‘I know you had some really big feelings. Let’s talk about why you were having them.’ I want to be an emotional surrogate for them. Because when they are so mad, what I usually see is that they are sad and scared. Finding the right words helps let them know they’re going to be okay.”

* At her request, Alyssa’s sons’ names have been changed to protect their privacy.