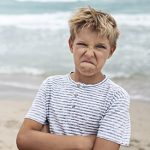 Your middle schooler and anger

Jamie Sanders and her 14-year-old son, Ayden, struggled for years. Almost daily, Ayden would erupt into anger. He’d rail that his sister got preferential treatment. He’d be upset about being called to dinner when he was in the middle of playing a video game. Nearly every interaction turned into a fight. His mom was baffled because her son’s eruptions often appeared to have little to do with what was going on in the moment. Sometimes, says Sanders, her son would explode “because of something as simple as me saying to him, ‘Hey, you need to go take a shower.’ He would go from perfectly happy and calm to yelling and throwing stuff within seconds.”

For Ayden, “everything felt overwhelming.” He admits to feeling a level of frustration and anger he couldn’t contain. What would make everything worse? “My parents would get mad at me for being mad.”

Sanders and her husband were at a loss. They tried various forms of discipline, but nothing worked. Then they decided to try something different. They decided to stop paying attention to their son’s anger, and pay more attention to why he was so angry.

See anger as the “cover-up emotion”

Positive discipline experts say that too many adults look at an angry child and see, well, an angry child. But they invite grown-ups to look beyond the “bad” behavior. Once they do, they can more clearly see that anger is masking what’s really going on. “Parents will be most effective when they put on their detective hats and try to understand the belief behind the behavior,” says Jane Nelsen, author of the Positive Discipline series.

Often a tween is acting out because they are afraid of disappointing their parents. It may not seem like it, but tweens are scared that if they aren’t the child they think their parents expect them to be, they’ll stop loving them. Middle schoolers might be feeling alienated from classmates, anxious about school, having a conflict with a sibling, or simply feeling overwhelmed by the internal and external changes going on in their rapidly growing brains and bodies.

The generations-old approach to dealing with a sullen, hostile, noncompliant, or openly combative tween is often met with some form of discipline. Disciplining an angry middle schooler might mean taking away a cell phone, delivering a stern lecture, or grounding them. Or the permissive parent, weary of so much conflict, might just decide to let the storm pass with a sigh.

Instead, Nelsen encourages parents to focus on reframing the anger (correction) and validating their feelings (connection). “You can say something like, ‘I can see you’re really angry right now.’ Then they will often give you more information,” says Nelsen, such as yes, I broke my phone or so-and-so is leaving me out. “But,” Nelsen stresses, “the correction part is never punishment.” It’s about helping your child access their emotions so they don’t feel, and act, out of control.

Realize that kids get mad. (All people do.)

There is a long-held belief about children and anger: that kids shouldn’t get mad. A “good” child is well-behaved and pleasant. A “bad” one acts out with overwhelming feelings. (Another reason parents don’t want their child to show how mad they may be feeling? An angry child can feel like a critique to a parent that they’re not doing their job right.)

Positive discipline experts urge parents to reconsider these beliefs. Instead of resisting, at all costs, a tween’s outbursts, accept that all people get angry. “Getting upset is a normal part of life. And kids feel things intensely,” says Dr. Nanika Coor, a Brooklyn-based clinical psychologist who specializes in working with parents. “Their ability to identify and manage their emotions effectively won’t be fully developed until age 25.” Even then, it’s not like a magic switch helps adults identify and process their emotions. It’s a process that starts now — and that parents can help their children learn.

Let them be mad

“If you have an angry child standing in front of you, your goal isn’t to make them less angry,” explains Coor. “Your goal is to let them know that you see and hear that they are angry. Kids who feel seen and heard feel understood. It also helps them feel safe because they aren’t worried their parents will reject them if they are feeling bad.”

This can be a tall order with tweens who have a reputation for lashing out. Middle schoolers, Coor says, might well “say rude things, be resistant or combative. But don’t take their words personally and don’t retaliate,” she says.

“They’re showing and telling you their feelings the only way they know how right now. Work to see the situation from their point of view and state your understanding of it. When kids feel understood, they’re more likely to settle down, even if things don’t work out the way they wanted them to.”

Invite them to talk

In the heat of the moment, your tween may be in “fight or flight” mode; if so, they probably can’t hear you and there’s no point in trying to reason or talk. “When everyone is in a calm and connected place, you can process the incident together,” says Coor. “Let them know that while it’s okay to be upset, it’s not okay with you to be spoken to with hurtful words or for people or property to get hurt.”

Start an ongoing conversation with your tween about how to express difficult emotions safely. Coor recommends parents, “brainstorm with them to come up with creative alternatives for them to express and cope with their anger in the future. This is all part of the learning process, so that they know how to talk about their feelings and feel more in control of their anger instead of their anger controlling them.”

Your willingness to engage with your tween with empathy instead of outrage “lets them know that you understand how hard it is for them at that moment,” says Coor. “You’ll help a child move past the anger into the deeper emotion if you can work to be accepting versus rejecting the anger.” Remember, they are taking cues from you on how to navigate intense emotions safely. “Think of yourself as a lifeguard swimming out to their safety,” says Coor. “If you’re both flailing, you’re both going down. If you stay calm, you can get both of you back to safety on the shore.”

If your tween’s outbursts seem to be extreme, it’s worth seeking help from a therapist who can give a more objective assessment. Many children who struggle with extreme emotions suffer from ADHD or/and Oppositional Defiant Disorder. “If you have a really volatile kid,” says Coor, “I would go for help.”

This is exactly what happened with Ayden, who was diagnosed with ADHD. Sanders says that since that time, she and her husband have learned what works and what doesn’t, a process she writes about in her blog about parenting a child with ADHD.

“We now try to focus more on positive reinforcement,” says Sanders. “Our home life is much calmer now. Ayden does still occasionally have outbursts, but it’s not anywhere near as bad and not very often.” During calm moments, never in the heat of the moment, she and her husband go straight to the source, asking Ayden what works best for him when his temper flares. “He told me he wants to be alone when he’s upset,” she says. Since they’ve talked and agreed on this course of action, that’s what they do. Later, they talk about the incident calmly.

Ayden says it’s better to not have his parents on his heels lecturing, nagging, or yelling.

Would Ayden use the same approach with his own children if they acted out? “I’ve thought about this a lot,” he says. The answer is: yes, definitely. “I would leave them alone if they’re mad and talk to them after about it, when they’re more chilled-out.”