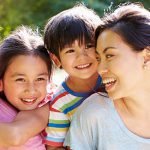 Discovering the secrets of happy families

Three years ago, author Bruce Feiler experienced a mild life crisis, which upended long-held assumptions about family life. He’d suffered through an especially wretched summer vacation with his wife and twin 5-year-old girls. He had two healthy, adorable daughters and a loving partner. Why didn’t this all add up to domestic bliss? Like most any parent, he wanted his family to function with easy, intuitive love and happiness. But he discovered that the daily disharmonies of modern family life — the innervating relentlessness of chaotic mornings and stressful evenings — made a happy hearth seem an impossible dream.

In response, Feiler did what any good journalist does: research. He embarked on three years of extensive fieldwork that included reading about 200 books and questioning scores of experts. His efforts paid off. The Secrets of Happy Families is reeling in glowing reviews, grateful letters, and best of all, his family life is humming with efficiency and, for the most part (they still have their moments, he admits), sweetness.

Feiler’s approach is out of the box. The Secrets of Happy Families makes a u-turn from the decades-long trend of applying psychoanalysis to family life. He eschews family therapists, viewing their ideas as “tired and out-of-date.” Instead, his inquiry guides him to experts in unrelated fields, garnering tips on team-building from Green Berets, allowance advice from Warren Buffett’s banker, and games for road trips from Zynga. The result? A guidebook packed with counterintuitive ideas that can sound downright revolutionary. Forget the family dinner. Have the kids pick their punishments. And by all means hold the weekly family meetings, as long as the parents aren’t sitting in “power positions”.

Feiler’s guarantee is a bold one: “If you take just one idea from each chapter … your family will be transformed in less than a week.” We caught up with Feiler for a quick chat (a sometimes blurry but still inspiring Skyped video interview) right before his now 8-year-old twins’ birthday party.

Maybe the biggest thing I learned while working on The Secrets of Happy Families is that the model of running a family — that I was doing — wasn’t working. Like all other parents, we felt out of control and on the defensive with our children as they were entering elementary school. The biggest change that we’ve done is to start this weekly family meeting, where every week we sit down for 20 minutes and discuss how we’re operating as a family. And we ask three questions: what worked well this week, what didn’t work well, and what we are going to work on in the week ahead …

So my response to your question is, OK, if that’s not working well, bring it to the family meeting, discuss it as a group, and say, “Look, we have a house, we’ve got to clean it — everybody who lives here — we’re not going to do the work for you. We need everybody to do their share. We’re not going to pay you to clean the house. We know that doesn’t work, paying for chores, because kids will just do the chore for the money and not because they’re part of the team. And so we have to work on it together …

Our kids didn’t like the fact that we called them “chores.” … So we said, “Fine, call it whatever you want to call it … and they chose to call it “awesome stuff.” So now we say, “OK, have you done your awesome stuff?” So now we have “awesome stuff” and every week they have to pick an hour’s worth of awesome stuff … we have it divided into 30 minute jobs and 15 minute jobs. A 30 minute job is making the shopping list or cleaning out the pantry and a 15 minute job is fluffing the pillows around the house. But again, that system might not work in your family. The point of being an agile, adaptive family is you want to try things. You want to succeed and fail quickly … Whatever problem — bring it to the family, solicit input from 360 degrees, all members of the family — until you get a system that works for you.

… Nothing is top-down in the world anymore: not government, not business, even the military is not run top-down anymore. If we’re running our families top-down — as a Dad, I can elbow my kids into doing something once or twice, but it’s just not going to work long-term. So we want to bring our children into the conversation and these family meetings — following the latest cutting edge brain research — are actually letting our children recommend their own rewards and punishments. We want … their buy-in. Whenever children can get involved in setting up the system, it makes them intrinsically more motivated, and as parents, that’s the golden ticket.

We want our kids … not to be calling us when they’re 24 years old, wondering how can they do the laundry because they’ve never been taught. We want them to be motivated as young as possible. When you’re training them this way, you’re doing them and yourself, as a parent, a big favor.

Often it feels like all I do all day is nag, nag, nag. How can I stop doing this?

First of all, don’t talk to my wife, and don’t talk to me. We are naggers here. The challenge with the parent who nags and hovers and reminds and pushes and nudges their child is that the parent is keeping too much authority. And again, I’m guilty of this, so speaking from a lot of experience. But whenever I allow myself to give up more authority and empower my children more, that’s moving me in the right direction. Because it’s about power when you’re nagging all the time …

I’m constantly saying to them, “You set the schedule. Here’s a Saturday, OK? We got a big day. You want to read, you want to kick a soccer ball in the backyard, you want to go for a bike ride. I also need you to take a bath and practice your musical instrument and write a thank you note for that birthday party you went to … So first of all you set the schedule. Secondly, you tell me the consequences if you don’t do it. I could pick the consequence, but I want you to pick it. If it is six o’clock and it turns out that you haven’t taken your bath or written your thank you note or done your homework, you tell me — the parent — what I’m going to do with you … If you don’t like punishment, then go with rewards. Give me the punishment if you don’t do this by six o’clock, and you give me the reward if you have it done by six o’clock.”

You talk about how wonderful family meetings are, but they never work in our family. My kids feel like we’re lecturing them and we often end up fighting. How do you make them work?

I heard from a lot of readers of Happy Families that are trying these meetings and they’re not working. And let me first of all say that it took us a long time to get them to function. That’s point number one. Point number two: you’ve got to keep them short and limit what you’re trying to accomplish. A tip if you’ve got small kids: put the allowance at the end; that means the kid will likely stick around.

The point is: you’ve got to get them to the point where they want something from you; that’s the moment it will work. If you are forcing it on them, maybe they’re going to be resistant to it … If you’re selling it as a way to impose parental order, what kid is going to want to come? If you sell it as a way for the kid to get what the kid wants, the kid is more likely to want to attend.

My children are disrespectful to each other. Sometimes they insist afterward that they’re just joking, but when it reaches a fever pitch it can seem kind of abusive. How can I end the madness?

… We’re working on this, in fact, this week. The research clearly shows that siblings fight, family members fight because they take one another for granted… I have twin daughters, and they can be incredibly loving and I feel so honored to be their dad. But … they can be vicious because they know exactly how to press the buttons. The research on siblings does show that if you want to cut down on that disrespect and tension between them, if you give them collaborative tasks — something to do together as a team, say 10 minutes before there’s a high-stress event, say a meal or a long car ride … it will remind them that they benefit from one another and it has been shown to reduce tension.

… The research clearly shows that parents should spend less time worrying about what they do wrong and more time focusing on what they do right. If you make these positive memories, they will outweigh the negative ones. So I think that when we get into a negative cycle around here — with yelling and screaming and disrespect — my wife is the one constantly reminding me to take my own lesson … Let’s do something together where we have a positive experience and then let’s go back and tackle that problem that we’re all disagreeing about.

If you could only give one piece of parenting advice to make families happier, what would it be?

And I’ll go one step further. We have a tremendous amount of knowledge out there that has already changed how we parent. Nobody would consider putting a 2-year-old in the backseat without being in a car seat. No one would consider putting a child on a bike without a bike helmet. We know that smoking in front of your children can be dangerous. We know that drinking while pregnant can be dangerous. We have taken advantage of knowledge in almost every other aspect of how we live our lives, and yet we are somehow reluctant to take advantage of that knowledge with our families.

Well, I spent the last three years looking in the hundred places and tried to put them in one place so people had the answers. That’s what The Secret of Happy Families is meant to be. You’re not going to like all the ideas, but I would be stunned if you couldn’t find three ideas in it that make your family happier.