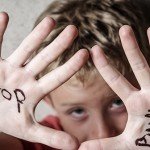 10 steps to building a bully-free school

When schools create a culture where everyone belongs, bullying is less of a problem.

This article is adapted from the book, Schools Where Everyone Belongs, by Stan Davis.