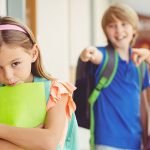 In her new book, author Emily Bazelon takes a close up look at bullying past and present — and explores what it says about kids, parenting, and American culture.

For centuries if not forever, children have bullied each other, and for almost as long, adults have mostly ignored them.

The concept that children deserve special protection — as opposed to serving as a source of cheap labor — didn’t exist until the nineteenth century. At that point, child-rearing manuals began urging parents to teach their children Christian kindness, making clear, for example, that an older brother who scalded his little sister’s kitten (after she used his kite to make a muff for it) was to be sternly instructed in the wrongness of his ways.

From Flashman to Nellie Oleson: bullies in fiction

Even then, though, bullying wasn’t considered worthy of much comment by adults — with the exception of a few sharp-eyed novelists. Only in the fiction of the era have I found tales of bullying that read like the real-life stories we tell today.

Charlotte Brontë, for example, made her readers feel Jane Eyre’s misfortune by showing her cowering before a vicious older cousin: “He bullied and punished me; not two or three times in the week, not once or twice in the day, but continually: every nerve I had feared him, and every morsel of flesh on my bones shrank when he came near.”

A decade later, in 1857, Tom Brown’s School Days launched a thousand British school novels with its account of eleven-year-old Tom’s thrashings at the hands of a seventeen-year-old tormentor named Flashman (“Very well then; let’s roast him,” Flashman calls to his buddies before knocking Tom into the fireplace).

Looking back on her American frontier childhood in her Little House books, Laura Ingalls Wilder anticipated the modern-day mean girl in her character Nellie Oleson, who wrinkled up her nose at Laura’s and Mary’s homemade dresses. “ ‘Hm! ’ she said. ‘Country girls! ’ ” And, “Don’t you wish you had a fur cape, Laura? But your Pa couldn’t buy you one. Your Pa’s not a storekeeper.” Laura tells us that she dared not slap Nellie, who “went away laughing.”

These fictional kids — stand-ins for the real children left out of the history books — suffered their cuts, burns, and hurt feelings while the adults stood by. No teacher or parent helped Tom or sympathized with Laura. When Jane’s aunt interceded, it was to lock up her niece for defending herself.

Fiction reflected a cold underlying fact of life: bullying was a matter of course. A battery of sayings would arise to dismiss its significance: Boys will be boys. Just walk away. Ignore it. Sticks and stones may break my bones but words will never hurt me.

This basic stance remained largely unchanged in America for the next hundred years: bullying was an inexorable part of life, a force of nature, and the best thing to do was to shrug it off.

And then on April 20, 1999, that bedrock principle of child rearing collapsed in this country. That morning, at 11:19, two seniors — Eric Harris and Dylan Klebold — walked into Columbine High School, in a suburb outside Denver, and opened fire on their classmates with semiautomatic weapons. When the forty-nine-minute rampage was over, twelve students and a teacher lay dead, with two dozen more students injured.

It was a dreadful awakening, for many of us, to the devastation that disaffected but normal-seeming middle-class teenagers can wreak. In the aftermath, a nation that had treated bullying as a rite of passage suddenly started to rethink its indifference.

Harris and Klebold weren’t themselves targets of bullying (or known bullies). But when a subsequent nationwide investigation revealed that most kids who turn into school shooters have previously felt persecuted, bullied, or threatened, the lesson was driven home: to brush off bullying was to court disaster, by ignoring a deadly serious threat.