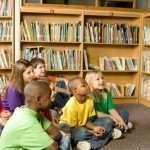 Fewer than 1 out of 4 schools in California is staffed with a credentialed librarian, according to the state Department of Education.

Recent figures compiled by the department show there are about 900 school librarians in the state — that’s down from more than 1,100 two years ago.

From Los Angeles to San Mateo and Fullerton, school districts have cut librarian positions this year to cope with state budget cuts. Increasing numbers of schools are splitting one librarian between multiple campuses or relying on clerical aids or parent volunteers to keep the doors open.

Library advocates say students are the ones harmed when they don’t have trained librarians who can teach research techniques and turn them on to a love of reading. Others question whether technological advances and the ease of conducting research online have made librarians less essential.

Diane Alexander took early retirement last year because she thought she would have been spread too thin as the sole librarian for three high schools.

“If you have that many students to serve, you’re not really serving them,” said Alexander, who also is president of the California School Library Association. Her district, the Liberty Union High School District in Contra Costa County, cut positions to one librarian and three clerks to manage three high school libraries. “They expected me to be that person, but I didn’t feel like I could do an adequate job. It was so disturbing.”

But in this austere period, some wonder whether schools can afford to retain librarians as teachers and nurses are laid off.

“You have to make choices sometimes, and the importance of librarians is a bit less than it used to be,” said Ze’ev Wurman, a Silicon Valley executive who participated in the development of California education standards and served as a policy adviser for the U.S. Department of Education. “In the elementary grades especially, librarians are essentially teachers’ aides, doing a variety of things that have little to do with books or literacy, per se.”

Teachers, not librarians, are the ones who have to respond to research questions that arise in class, Wurman argued in a recent New York Times opinion piece. He believes that access to books is not a problem, citing a 2009 report by the U.S. Department of Education that showed schools that received grants for their libraries showed almost no increase in the amount of materials checked out.

In California, school librarians are called teacher-librarians because they must earn both credentials. Alexander said she helped develop lessons with teachers and hosted classes in the library virtually every class period. Sometimes, she’d host two classes at once.

When teaching an English class about research projects, she’d often pull contemporary books with common themes, show students how to use databases, and explain copyright issues and source citing. When she had a spare minute, she would suggest good books to challenge a voracious reader or reach out to a struggling student.

“We’re the ones who know the current books,” Alexander said. “It can make a huge difference if you can hook a kid onto reading.”

The benefits of a trained librarian go beyond helping with reading and research, said Barbara Jeffus, the state Department of Education’s school librarian consultant.

“There is a body of research growing every day that if you have a teacher-librarian working with classroom teachers, student achievement is higher,” she said.