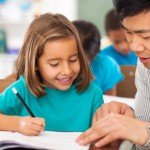 What does teacher tenure mean for parents?

Experts say the California tenure case has huge national significance, but what does it mean for your child?

This week, when a California court ruled that California’s teacher tenure laws denied students their constitutional right to an equal education, I found myself poring over article after legal document after commentary, attempting to make sense of a lawsuit embroiled in controversy. The decision spells out the ruling and the three laws’ flaws well, but nothing I read made it clear how any of this might affect my daughter’s education.

Judge Rolf M. Treu of the Los Angeles Superior Court struck down three provisions of the law: seniority rules when teachers are laid off — often referred to as LIFO “last in first out” — mandating that the most recently hired teachers are the first to be laid off; the granting of tenure after only a two-year probationary period, which in practice is less than two years; and the extensive due process required to fire an ineffective or abusive teacher.

The lawsuit, filed on behalf of nine students, was financed by Silicon Valley millionaire Jack Welch, who has vowed to use the courts to reform teacher tenure laws in other states. Prior court cases have established that access to education must be equal — not different based on racial segregation (Brown vs. Board of Education in 1954), funding disparities (Serrano I in 1971 & Serrano II in 1976), or the length of the school year (Butt vs. State of California in 1992), but this is the first U.S. case considering the issue of equality when it comes to the quality of a child’s education.

The decision has been heralded as a great victory by education reformers focused on curbing the power of teachers unions. It’s also been decried as a miscarriage of justice by teachers union defenders, who regard it as yet another attempt to blame teachers for an education system shackled by societal problems far beyond their control.

The ruling — in a nutshell

But as fun as it is to pore over the endless riffs on the judge’s strongly worded 16-page decision, it only gets me so far. As a garden-variety parent with a child in a public school, I’m left with more questions than answers about how this affects the wide middle.

In fact, much of the evidence cited by the judge focuses on the extremes: really bad teachers, low-performing schools. There are an estimated 3,000-8,000 teachers who have been evaluated as “grossly ineffective,” but the due process for firing a single teacher can take as long as two to 10 years and cost in the neighborhood of $40-50K. The judge also cited a calculation that one bad teacher can cost his or her classroom $1.4 million dollars in lifetime earnings — and that schools with the most low-income and minority students have the highest numbers of low-performing teachers.

What’s more, California tenure laws offer teachers more protections than those in other states. Unlike most states that take three to five years to consider teachers for tenure, California is one of five states that grant tenure in just two years. Surprisingly, because of a clause in this law requiring that teachers be notified of their tenure status for the coming fall by March 15, this two-year period is really more like 16 to 18 months. Combine this with our emergency credentialing process, the irony is that teachers can be awarded tenure before they are finished getting their credential. California is one of only 10 states that require administrators to consider seniority as a factor when it comes to placement and layoffs.

If you have a child in a California public school with teachers who have been evaluated as grossly ineffective, abusive, or incompetent, this ruling may directly affect your child’s education — if the ruling is upheld on appeal, a process that some experts say will take years.

But what about now, and what about the rest of us that don’t have children in classrooms of one of the 1 to 3 percent of teachers who have been officially labeled bad? How do teacher tenure laws like LIFO, extensive due process, and two-year tenure policies affect most kids’ education?

Looking at how this case might affect one of my daughter’s most beloved teachers, the whole issue takes on more personal meaning.

Mr. L graduated from teachers’ college a few years ago, when our district was handing out pink slips like a year-end ritual. Instead of seeking employment elsewhere, he signed up as a substitute, and lucky for us, he ended up at the top of our sub list just as one of the school’s veteran teachers had begun to call in sick — week after week.

Ms. W had recently come under fire by parents who accused her of vindictive and weird behavior, such as parading children who had broken the rules in a “walk of shame,” and not letting kids go to the bathroom. (Like the vast majority of teachers in the nation, she’d never received anything but a satisfactory evaluation, despite a decade of parent complaints.)

While Ms. W was on a year’s sabbatical (She had admitted to me about how burned-out she was.), angry parents began organizing, putting pressure on the district, the union, and the principal to lay her off. But since this teacher had tenure, it meant any layoff would involve a multi-year — and probably unsuccessful — process.

When Ms. W returned to school, her seniority allowed her to choose which grade she wanted to teach, even if it meant bumping a less-senior teacher who was doing a fantastic job. She picked an open 4th/5th class, which was good in that it didn’t displace any other teachers, but it also meant that some of the children who had been traumatized by her in 2nd grade would now have her again. A month or so into the year, claiming that her work environment had become hostile (which no doubt it had), Ms. W went on “sick leave” and Mr. L was hired as a long-term sub/part-time co-teacher, offering a thread of continuity to the students.

As a teacher without seniority, Mr. L didn’t get a full-time position, but was hired as a half-time teacher to co-teach the 3rd grade with a wonderful veteran teacher who also serves as the reading specialist. Despite his limited work schedule, Mr. L spends extra time with the kids, eating lunch with a group of 4th and 5th grade boys twice a week to talk to them about the importance of staying serious about school, playing a mean game of four-square with the girls during recess, and helping out with the early morning newspaper club. He also spends one of his days off having lunch with his mentor, a master teacher who is helping him develop his teaching practice. Highly motivated, dedicated, and passionate about learning his craft, Mr. L is just the sort of professional that would rise through the ranks of any work environment. But at our school, though widely acknowledged to be a gem, Mr. L’s reward is a part-time job that doesn’t pay a living wage and the awareness that if anyone is going to be laid off, it will be him.

Recently, the school drummed up an extra .25 position — about $10,000 — to help support the 4th and 5th grade teachers whose classes have ballooned as big as 35 students and are now expected to teach to a higher standard under Common Core. When parents suggested that Mr. L was the obvious choice to fill that position, the principal explained that she had little say in the matter, since she would have to open the job up based on seniority.

The story of Mr. L and Ms. W is just an anecdote, but it does show how irrational these tenure laws can be.

Next up: better incentives for teachers

Supporters of the current tenure protections argue that these laws help recruit and retain excellent teachers by promising them stability in return for high wages. Maybe, but sometimes they may do just the opposite, by incentivizing teachers to hold on to jobs for all the wrong reasons. They also suggest that weakening these laws will lead to even more turnover and instability in low-performing schools — where the work is so hard that it chews up idealistic young teachers and spits them out in regular two-year cycles. To them I say, there’s got to be a better way to attract teachers to these jobs than a tenure system that doesn’t allow schools to cultivate new talent and fire those who are not doing their job.

Behind all of this is a huge controversy about fair and reliable ways to evaluate teachers’ effectiveness. It’s a debate that hasn’t been resolved — and needs to be studied and addressed.

Most importantly, teachers deserve heaps of respect — and it would be a shame if this court case led to all of our qualified, caring, and strong teachers feeling unappreciated. Unfortunately, many of the ones I know — very good, hard-working teachers – are struggling with low morale, a lack of resources, little ongoing training and support, and a loud and critical national conversation about “grossly ineffective teachers.” Understandably, it makes them feel under attack — even, of course, if that’s far from the case. Reforming teacher tenure laws needs to go hand in hand with new initiatives to support a generation of teachers who deserve a living wage, who are well trained, and who feel the respect that accrues to every other professional.

We’re only as good as our teachers. They’re the gardeners of our civilization and both sides of this debate know this. It’s time we treat them as such.