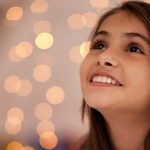 6 heroes your child (and you) can learn from

Think kids grow up to become great American heroes on their own? Think again.

When you see a successful person, do you ever think about who helped them become great? Very often, someone who has accomplished great things in life had someone — a parent, a grandparent, a teacher, a friend — who believed in them and helped guide them to greatness.

Here are the stories of six famous American heroes and the people around them who expected them to be successful — and who kept reminding them to stick with it and reach for the stars. Share these stories with your own kids as examples of how high expectations and hard work can reap rewards.