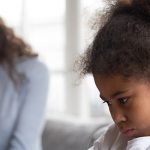 Can changing my behavior toward my child improve our relationship?

Are you stuck in a cycle of negative interactions with your child? An expert tells you how to give up those negative scripts and forge a more positive relationship.

Many children, especially those with learning problems, are burdened with feelings of low self-esteem and resort to the use of ineffective coping strategies to mask their sense of inadequacy. Unfortunately, these youngsters become fixed in the way they respond to a variety of situations, repeating the same self-defeating behaviors over and over again. It is as if they are following a prescribed script with little, if any, room for improvisation.

Adding to the problem is a phenomenon that parents and teachers, attempting to change the “negative script” of the child, often unintentionally develop their own “negative scripts.” It is as if we are watching a play, where the words and behavior of all the “cast members” are set in stone. One can predict that if the child says or does something, the parent will respond in an equally predictable way. In effect, there is no room for change; rather the scripts become increasingly familiar and entrenched. This would not be a problem if the scripts had a more positive tone, but often the scripts perpetuate a negative situation.

It takes two to tango

When such a situation exists, what can we, as parents, teachers, and other professionals who work with children (and especially children with learning and attention problems), do to make positive changes? I have discovered that if strategies for fostering self-esteem, motivation, hope, and resilience in children are to be effective, adults typically must make the first changes in order to create the appropriate climate for youngsters to abandon their negative behaviors.

Unfortunately, many well-meaning adults expect children to take the initial step and alter their behavior. One father said to me, “If I change my expectations, my son will think I’m giving in and take advantage of the situation.” I believe that if adults have the courage to modify the ways in which they have been relating to children, these children will become more cooperative, rather than more manipulative and resistant. For this reason, I use the metaphor “It takes two to tango.” By this I mean, whether or not youngsters with learning and attention problems modify their behavior may have as much to do with our reactions as with the child’s mindset.

As an example, I consulted with teachers about a high school freshman with learning problems who was hyperactive and required time at the beginning of each day to acclimate himself to school. The teachers referred to him as a “roamer” since he never seemed to get to his homeroom on time, preferring instead to roam the halls. They reported that rewards and punishments seemed to have little, if any, impact on his behavior. They also interpreted his behavior as “willful” and “manipulative.”

I empathized with the teachers, but given their continued lack of success in changing his behavior I wondered what they might do differently. I also questioned whether he was being willful, as they assumed, or if in fact, given his hyperactivity, he had a “need” to roam. I asked how we might use his need to roam constructively.

Although at first the teachers felt it was this student’s responsibility to change, I was impressed by their willingness to modify their script. This led to some creative problem solving in which the student was appointed “attendance monitor,” a position that entailed his walking down the hall with a clipboard each morning, a clipboard containing the name of each teacher. The principal informed this boy that it would help the school if he would take attendance of teachers to ensure there was a teacher present in each classroom. This responsibility provided an avenue through which this adolescent could comfortably transition to the school environment each day, enabling him to adjust to the demands of the school. In essence, these adults were willing to change their script first, having the courage to ask what they could do differently. None felt they were “giving in” by taking the first step, a feeling reinforced by this boy’s demonstrating greater success and responsibility in school.

Giving in or creating cooperation?

I especially want to address the issue of “giving in.” If an intervention to motivate students (with learning problems or not) is not working, then it is our responsibility to develop and implement more effective strategies. Last year when I was giving a workshop in Texas, one of the participants laughingly said, “We have an expression for that in Texas. If the horse is dead, get off.” While many may agree with this expression, I continue to attend meetings in schools or clinics in which I hear, “We have been doing this for six months and the child is still not responding. He (or she) is resistant and oppositional.”

I believe in perseverance, but if we have used an intervention for six months with no positive results, I often wonder, “Who are the resistant ones in this scenario?” When asked if youngsters will fail to learn responsibility if adults make the first changes, I answer, “That will only occur if the goals of our changes are not to promote ownership and cooperation in youth.”

Returning to the theme of empathy, I believe empathic adults should always ask two questions when raising or working with children with learning and attention difficulties. They are:

As an illustration, many parents and teachers may exhort children with learning problems to “try harder.” Their goal is to motivate these children. However, the comment “try harder” is typically experienced as judgmental and accusatory, often prompting greater anger and less cooperation on the part of the students.

As an alternative, I recommend adults change their script and not utter a comment one can predict in advance which has a high likelihood of being perceived as accusatory. Instead, I suggest adults say to children with learning difficulties that the problem is not they are not trying, but rather the strategies they are using to learn, or the strategies the teachers are using to instruct them, are not proving effective. Although it may seem like a small difference, casting a problem in terms of an ineffective strategy removes the judgmental quality of saying, “Try harder.”

Teachers have told me this modification has led to a more cooperative relationship with students in seeking more productive strategies. Collaborating with students in this way also increases a feeling of ownership which, as attribution theory has shown, is one of the hallmarks of increased self-esteem and confidence, as well as one of the main characteristics of a resilient mindset.

Strategies to foster self-esteem, motivation, and resilience in children with learning problems will have a greater probability of success if we change any of our own ineffective scripts. Following are some steps to modify negative scripts that Dr. Sam Goldstein and I describe in our book Raising Resilient Children. I hope they will serve as guidelines as you attempt to modify those scripts that have proved unsuccessful in your relationship with your child, student, or client.

If we subscribe to the belief that our mindset and subsequent actions can lead to positive changes in our children, then we will be better equipped to implement strategies in our classrooms and homes to foster self-esteem, hope, and resilience in children (with learning problems or not). My next article will focus on such strategies in the home environment, while my final article will describe strategies that can be used in our schools.