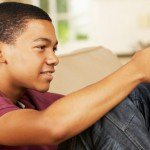 Usually in hand, never more than an arm’s length away — just how safe is your tween or teen’s cell phone?

First of all, can we agree to stop calling them cell phones and just call them phones? And while we’re at it, let’s acknowledge that adults and teens alike are attached to these devices in ways that would’ve been inconceivable just 10 years ago.

The benefits and pleasures of being connected 24/7 are not without risks, which kids are especially vulnerable to. Here are the top three risks to be aware of, along with tips for encouraging safer cell phone — er, phone — use for the whole family.

According to a 2018 study, 37 percent of teen drivers text while behind the wheel — and that may be a low estimate. In another survey, nearly half of U.S. high school students admitted to having texted while driving in the previous 30 days. And in a 2016 State Farm insurance company poll, 41 percent of young drivers reported checking social media while driving and nearly a third reported posting updates from the driver’s seat.

There’s no question that this epidemic of distracted driving has deadly consequences. By the most recent count, 3,477 people are killed annually in distraction-related accidents and nearly 400,000 are injured. According to a recent survey of the research, drivers ages 16 to 19 are the most likely to die in distracted-driving crashes, and driving while holding a cell phone makes teens three to four times more likely to be involved in an accident.

For Android users, the app Surete helps prevent drivers from texting, emailing, or using social media while driving by locking the smartphone and blocking all apps once the vehicle has started. (Surete’s system does allow users to make emergency calls, access navigation, and use apps approved by the administrator.)

For iPhone users, Mojo’s True Motion Family app is designed to track your family’s trips and record how much time everyone drives without distraction. If everyone drives safely, the family earns points that can be redeemed for cash or prizes.

As more and more is written about the how these miraculous devices are purposely designed to keep us coming back for more, parents have good reason to be concerned. The average teen spends nine hours a day using electronic media, according to a survey by Common Sense Media. That survey also found that half of teenagers felt addicted to their phones, and 78 percent checked them hourly or more. Multiple studies link addictive relationships with mobile devices to mental health problems in teens, including depression, anxiety, and disrupted sleep. Neuroscience tells us that tweens’ and teens’ developing brains make them especially vulnerable to both addiction and mental health crises.

Since teens use their phones for everything from schoolwork to socializing to getting around, it can be hard to distinguish between use that is appropriate and beneficial on the one hand, and obsessive on the other. Red flags include missing out on in-person interactions with friends or family in favor of time on devices and neglecting their other activities and responsibilities. One key step parents can take is to institute a cell phone curfew — for everyone in the family.

Whether or not the radiofrequency energy emitted by cell phones causes cancer has been debated since the advent of the first mobile phone. While some studies have found statistically significant links between cancer risk and long-term cell phone use, others studies have found no link. And the effect of these waves on children’s developing brains is not yet known. Since it’s better to be safe than sorry, encourage everyone in your family to adopt safe habits.

In 2017, the state of California issued guidelines for limiting exposure to radiofrequency energy from cell phones. Safe practices include:
• While sleeping, keep your phone a few feet away from your body;
• When streaming audio or video, keep your device away from your body and head;
• If talking on the phone, use a headset rather than holding the phone close to your head;
• In a fast-moving vehicle or on rapid transit, use airplane mode because your phone puts out more radiofrequency energy to maintain a connection as it switches from one cell tower to the next.

Your child’s brain on technology: video games
Our kids are awash in technology 24/7 — should we worry about the effects on their developing brains?brain.