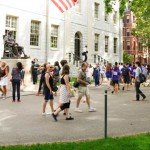 Want your child to catch the college bug? One mom discovers the secret: get 'em while they're young.

At 15 years old our son, Cole, suddenly lost interest in his future. It was the summer after his freshman year of high school, and our boy, who had been dreaming about going off to college since he was in the fifth grade, started asking if college mattered.

He’s a smart kid, but he wasn’t enjoying high school. And I could see that he was starting to view college as four more years of the same drudgery. My husband and I panicked —and started touring colleges to help re-inspire him. I wasn’t so much interested in helping him choose a college as I was in showing him that life would be different in college, filled with freedom and independence that he would love.

So we decided to work a few university tours into our summer travel plans. We choose campuses not based on how likely he was to attend them, but by how well they suited our vacation plans geographically. It was a solid strategy — in fact, it’s just what college counselors suggest. “I always encourage families to work a casual college tour into a family vacation,” says Marty O’Connell, Executive Director of Colleges that Change Lives. “That way you can expose kids to different college environments without putting any pressure on them.”

But along the way, something completely unexpected happened: Cole’s little sister, Ava, devised a detailed life plan based almost entirely on what she learned while tagging along. Sure, these stops were aimed at her brother, but for my daughter – all of 12 years old – it was pure motivation. According to O’Connell, this outcome is not unusual. “Over the years, I have heard over and over from kids who were that younger sibling,” she says. “‘My older brother hated that school. But I loved it.’”

We only brought Ava along because not bringing her was awkward. She came grudgingly and seemed — at least at first — bored. She was in the summer between sixth and seventh grade, caught up in the thrill of being a newly minted middle schooler and barely handling bigger responsibilities and homework. She wasn’t ready to think of herself as a high school student, let alone a college coed.

And, admittedly, the tours — our first was at the University of North Carolina at Chapel Hill — started out slowly. We had signed up for the official guided tour. It began with a lecture by the admissions officer, who focused on statistics about how many people get in, what sort of students they look for, and other details that would interest serious applicants — but not my kids. Next, though, came the student-led tour.

In this, a witty, self-deprecating young man who claimed to be a middling student academically (though I doubt this) walked us around and showed us college life from a student’s perspective. “I have only one claim to fame,” he told the small crowd, wilting in the southern heat. “I started a secret society.” The teens in the group wanted to know more. But he was mum. “It’s secret,” he insisted.

He had the high schoolers’ attention now, though my middle schooler was still bored. Our tour guide showed us his favorite dorms, the best place to get pizza, and where students go to study and relax. He told us local lore about trees that held good luck for the school, showed us video of flash mobs in the library, pointed out a famous student basketball player he’d lost a girlfriend to, and shared the campus rule about never kissing on a certain bench because of the superstition that it would end in marriage. I enjoyed the tour and so did Cole.

Somewhere between the secret society and kissing superstitions, Ava had gotten hooked, too. No longer desperate to get out of there, she was now salivating over this future. She was laughing along with the (too-mature) humor, imagining a future where a parent-paid-for meal card would buy her whatever she wanted in any yoghurt store or burger joint on campus. She was dreaming of rolling out of bed into a social life so packed it would leave no time for sleep.

At first, I was just happy she no longer looked fatally bored. But in the car on the way home, it dawned on me that this had been an epiphany for her. My little girl no longer saw herself as a kid in middle school. She saw herself as a young person on a path – middle school only the current step on that path — that led somewhere. “I am going to college there,” she announced with absolute certainty after I’d wasted 10 frustrating minutes trying to get any reaction to the school from her brother.

She didn’t give me time to speak before she shared what she’d been plotting. “First, I’m going to the early college.” (There is a Bill and Melinda Gates Foundation early college at a campus near us.) “Then I’ll go there. And I want to study in Europe for a year. I want a degree in marine archeology.” I was stunned. I had dreamed that her brother would be inspired. He wasn’t. He sat mute and sullen, refusing to participate in any conversation that featured him as a motivated student.

But I never expected a plan this clear — even from him.

“What do I need to do to make that happen?” she asked, ignoring my question as frivolous and off-point.

So I told her, “You will need better grades.” She nodded. “And you might want to get involved in sports or some sort of extracurricular activity.” She agreed.

It has been almost nine months since we took that tour. My daughter remains certain of her plan. Of course, like any 12-year-old, she often procrastinates studying or doing her homework. But I have only to remind her that she has things she wants to accomplish and she gets her books out and gets to work. She joined the swim team and takes it seriously. She takes photography seriously. And she even let me sign her up for some online classes to supplement her school’s not-so-great math and science curriculum.

Her brother remains unmoved by any visions of later-night pizza runs involving heated discussions of Kierkegaard. But the unrelenting competition between him and his sister has spurred Cole to pick up his grades.

I have no idea if the college tour gave Ava such a clear plan or if it’s simply her nature and the tour gave focus to her innate ambition. But as tourist destinations go, I can’t recommend the college campus enough for families with teens and tweens. I wish we had arranged for Cole to be that under-no-pressure tagalong on someone else’s college tour when he was in middle school. Maybe he wouldn’t be so apathetic now. We have long forgotten most of the touristy stuff we did on that trip, yet that (free!) college tour motivates my daughter every day. Just to keep her inspired, you can bet that all our vacations for the next three years will include a detour to a local college campus.