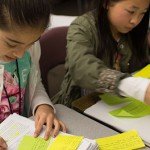 The who, what, when, where, and how of the new education standards — and what they mean for your child.

Education standards don’t normally quicken the pulse — or even get much attention — but now that’s no longer the case. As new national education standards, known as the Common Core State Standards (CCSS) are being implemented, they’re creating a buzz — both positive and negative.

Supporters — which include teachers’ unions, the PTA, as well as many education experts and policy makers — say the standards will increase the rigor and quality of American schools and put the U.S. back on the map in terms of education excellence.

According to National PTA president Betsy Landers, the standards, “represent the single most important step towards raising the achievement bar for America’s students and improving academic performance,” and one early survey found that a majority of teachers support the standards as well.

Critics, on the other hand, suggest the CCSS will damage our current education system, though their reasons for opposing the standards are often very different. Some argue the standards are evidence of government overreach and say they do everything from push an anti-gun agenda to mine data on our children. Some education experts are also wary, insisting they will ramp up high stakes testing and promote a more rigid approach to education, among other critiques.

Are you confused yet?

To cut through the clamor, we’ve created this quick cheat sheet of CCSS fundamentals to help you make up your own mind about the standards and how they’ll affect your child’s education.

What are the Common Core State Standards — and how are they different from previous standards?

The goal of the CCSS is to set clear, consistent benchmarks for what students are expected to learn in each grade to prepare them for college and career.

How do the CCSS differ from current education standards? Up until now, individual states have developed their own standards, which means that math taught to second graders in Brattleboro, Vermont may look wildly different from the math a second grader in Bozeman, Montana learns. The CCSS are the first attempt at national standards, but they were created by a coalition of states — not, as some critics claim — by the federal government. Every state in the nation decided whether or not to adopt them. The goal of the CCSS is to create consistent, rigorous education expectations for every child, no matter where he or she lives.

Developed by the National Governors Association and the Council of Chief State School Officers, the CCSS authors consulted with parents, educators, education policy makers, and others in developing standards they say are based on the most effective and rigorous education standards in the U.S. and around the world.

Learn more about the background and development of the Common Core State Standards.

Why were the CCSS developed?

For those students who make it to college, many do not have the basic skills they need to succeed. Each year, one million students fail college placement tests, and more than one-third of all students enroll in remedial education to learn skills they should have mastered in high school. This lack of preparation not only forces many students to spend extra years in college, it also jeopardizes their chances for college success. College completion rates are only about 59 percent for students who enroll in four-year colleges, and 31 percent for students seeking associate degrees. Lack of preparation is one of several factors that increase the likelihood that a student will drop out of college. Finally, between 1995 and 2010, the U.S. dropped from second to 13th among developed countries in the percentage of students who earn a college degree.

These discouraging outcomes are ominous because many jobs today require far more advanced skills than in the past. Recent surveys of employers in a range of professions found a general consensus that American schools aren’t preparing students for the modern workplace. Employers surveyed bemoaned workers’ lack of 21st century skills — including critical thinking, problem solving, creativity, and communication skills. These education failures don’t only jeopardize the futures of young people who aren’t prepared for 21st century jobs, they threaten U.S. prosperity and national security.

The Common Core State Standards were designed to address these problems and boost the quality of American education in all U.S. schools by encouraging depth over breadth in learning, putting emphasis on critical thinking and problem-solving, and focusing on mastery of both content and skills — specifically the 21st century skills that students will need for success in college and the workforce.

Find out more about the background and goals of the CCSS.

Where and when will the Common Core Standards be implemented?

The answer to this question depends on where you live. Currently, 46 states, along with Washington DC, Guam, U.S. Virgin Islands, and American Samoa, have adopted the CCSS. Four states — Nebraska, Texas, Alaska, and Virginia — chose not to adopt the standards, and Minnesota adopted only the English language arts standards.

Find out more information about implementation plans for the CCSS in your state.

How will the CCSS change your child’s education?

This is a key concern for many parents, and it’s a hard question to answer. The CCSS set solid grade-by grade benchmarks, but do not offer specific curricula or lesson plans. The standards provide goals for student achievement, but do not direct how teachers should reach those goals. States and individual districts will determine how to teach the CCSS and how to provide training and support to teachers.

Still, if you live in a state that has adopted the CCSS, there are some essential changes you can expect to see in your child’s classroom.

In math, more emphasis on:

Find out more about the Common Core math standards.

What’s next for Common Core?

Implementation of the Common Core State Standards has just begun in many areas and has yet to start in others. The new standards face a number of unresolved issues and obstacles, including:

Indeed, some critics — and even a few concerned supporters — have advocated delays or revisions based on feedback from the classroom, before fully implementing and introducing new tests to get these challenges resolved.

The road to Common Core has many uncertain twists and turns ahead. Whatever the outcome of the debate over the new standards, the reality is they are already changing the workings in many of our nation’s schools. It’s only a matter of time to see how well we adjust and how it changes the outcome of our children’s educations.