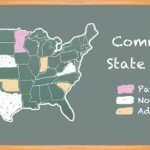 What are the Common Core State Standards?

Find out how the new academic guidelines will change what your child is learning.

Teachers, parents, education experts, and others from across the country created a set of national educational guidelines called the Common Core State Standards (CCSS) to define what students should be learning at each grade level so that they will be well-prepared for college or work.

To date, these standards have adopted by 45 states in the United States to ensure that students have consistent educational goals, no matter where they live. Supporters believe that students taught with these standards will be prepared to compete in the global economy. Critics say the Common Core State Standards do little to improve education, and that they take control over academic standards away from individual states.

The standards don’t describe how subjects should be taught. They leave the curriculum and teaching methods up to individual states and school districts. But they do explain what kinds of skills are expected of students in each grade and critical areas that should be covered. So far, the standards cover only English language arts and mathematics, but standards for science are expected to be released for state adoption in early 2013.

Go here to learn more about the Common Core State Standards, including which states have adopted them and what knowledge and skills students should have by the end of each grade.