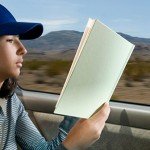 The long ride to a good education

More parents are willing to spend hours on the road to assure their child is in a school that really meets their needs. How far would you go?

Like so many Bay Area residents, Sara Noriega Díaz starts her day with a stressful one-hour commute through heavy morning traffic. Up before dawn, she rushes to get ready, eats breakfast, and then steels herself for the stop-and-go traverse through multiple cities. Unlike most Bay Area commuters, however, she’s not headed to work. She’s going to middle school.

Sara, 13, attends KIPP Bayview Academy in San Francisco, some 25 miles away from her home on the peninsula. Although most students still attend school closer to home, Sara is among an increasing number of students across the country who travel to distant neighborhoods, cities, and even districts to attend schools their families hope will better serve their educational needs.

According to a John Hopkins University study published in 2015, nearly 30 percent of incoming Chicago high school students who live in disadvantaged areas commute to a distant charter school or public school with open enrollment.

It’s not uncommon for young New Yorkers to take the subway with multiple transfers to get to the school of their choice. To productively use the hour or two each way, these kids do their homework on the train.

Across the country, the school choice movement that empowers families to select the best school for their child regardless of location also presents transportation challenges. Most schools don’t offer buses, and carpools can be difficult to coordinate. In many cases, the available public transportation doesn’t offer direct connections to schools, so students must walk or catch carpools in addition to public transportation. Finally, the cost of taking the bus or subway can be prohibitive for the lower-income families who, according to the study, are more likely to take advantage of the choice.

For Sara’s mother, Teresa Díaz, the decision to brave the crowded Bay Area interstates and drive her daughter to school each weekday wasn’t easy. Her husband’s work prevented him from helping. The extra expenses were daunting. It meant buying a more reliable car for the nearly 100 miles a day she’d be driving. At the time, gas prices were rising toward $4 a gallon. But Díaz felt pushed by circumstances. The schools easily available to her daughter did not provide high-quality, college-ready education to Latinas.

High performing — but not for my child

Sara’s mother ruled out both La Entrada and Hillview, the two highly rated public middle schools in their neighborhood. Both schools have an overall GreatSchools Rating of 10, but when measuring the success of their low-income students, their ratings drop to 6 and 5, respectively. Based on her experiences with her older children, Díaz knew that a school’s overall reputation could be deceiving. When her other children attended public elementary schools, she encountered unresponsive teachers and administrators who failed to address her concerns about academics and bullying.

Díaz had high hopes for the new Redwood City charter school Sara started in sixth grade. But during that first year, good teachers quit, only to be replaced by a wave of substitutes, and the principal was replaced midyear. One month into Sara’s seventh grade year, when both the math and science teachers quit, Díaz lost faith in the school; she decided not to take any more chances on her daughter’s education.

“Sara has a lot of potential. It would make me very sad if she didn’t have a good educational experience,” says Díaz.

In the end, Díaz decided that the best place for her daughter would be at one of the KIPP schools, charter schools known for their rigorous academics and intense college prep focus. But none of the closer KIPP schools had spots for seventh graders, so Díaz reluctantly decided to turn her family life upside down and add a couple of extra hours of driving to her day.

A blessing and a curse

For Díaz and her daughter, the long morning commute takes its toll. Three freeway merges between their home and KIPP Bayview Academy occasionally slow them down. They usually arrive by 7:30 a.m., when the school opens its doors to students. From there, Díaz has just one hour to get back to Palo Alto for the start of her 8:30 a.m. hotel maintenance shift. In the afternoon, Díaz drives an hour back to San Francisco to pick up her daughter and another 45 minutes to get home, depending on traffic.

Yet for Díaz, the education Sara receives is worth the sacrifice. Like many families trying to find the best educational options for their children, Díaz, who completed ninth grade and some technical training courses, thinks a college degree will give her daughter the opportunity she didn’t have to become a professional. In addition to a strong curriculum, Díaz likes that KIPP offers enrichment in computer literacy, sports, and music. Sara has even picked up basketball and violin since starting at Bayview Academy. Besides, says Díaz, the commute has other benefits.

“Even though it’s stressful because we are going against the clock, it’s a gift for me to have time with my daughter every day,” says Díaz. On the road, they sometimes discuss current events reported on the radio or simply share what is happening in their lives. Other times, they relax and listen to music.

Díaz also likes that KIPP encourages and guides students to take charge of their own education — which seems to be working. As she approaches ninth grade, Sara has her eye on getting into a competitive private school. She is studying for the Independent School Entrance Exam (ISEE), required by private schools, and plans to apply to high schools closer to home. She checked out a test preparation book from the library and, with guidance from her teachers, is studying and doing all the applications herself.

“KIPP motivates the kids. They help them find their strengths and develop them. At a district school I know Sara would be very motivated, but she might not have the same guidance,” Díaz says.

Still, the road to the far-flung school has its bumps. Since her move, Sara says it’s been hard to build friendships. It’s hard to hang out with her KIPP friends outside of school and she only sees hometown friends on the weekends.

“It’s hard because we live far away and my mom has stuff to do during the weekend, so it’s hard for her to drive me back and forth like she does during the week,” Sara says. Still, like her mother, she has no regrets: “It was hard for me at first, but I realized it was going to help my education, and to get into college, which is my ultimate goal.”

Considering a commute to school?

If you’re considering how far you’ll go to get an education for your child, it’s worth reflecting on a few questions.