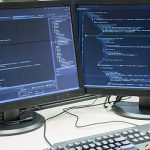 Being self-motivated and staying abreast of the latest programming languages are crucial for this in-demand career that's projected to grow 27 percent between 2014 and 2024.

Damond Pleasant, 45, is a cheerful full-stack web developer in Las Vegas. Although an Associate’s degree in web design or a related field is the “most common requirement” for this career path — and many web developers have a Bachelor’s degree or a certificate from a coding boot camp — Damond is entirely self-taught. “I educated myself as I went along,” he explains. “Project by project, using every resource I could find: books, the library, the internet.”

How he got there

Pleasant grew up in Los Angeles and graduated from Crenshaw High School. In 1999, he enlisted in the Navy, where he served six years as an Aegis computer technician. After the Navy, he worked as a Registration Technical Specialist for Otis College of Art and Design in Los Angeles. When he moved to Las Vegas in 2007, he worked as a freelance web developer. Now, Pleasant is a programmer at LV.net, a high-speed internet provider.

How he learned to code

In 1994, Pleasant introduced himself to web development by building his own geocity for the video game Mortal Kombat. Then, in 1997, he co-founded and served as the webmaster for Afronet.com, the first social media site for African-Americans.

What it means to be a web developer

Web development has three subcategories. Front-end developers design how a website looks; they create the layout, select graphics and applications, and place content like text, audio, and video. Back-end developers are responsible for the framework and technical functioning of the site. Webmasters keep sites updated and operating correctly. As a full-stack developer, Damond handles both front-end and back-end development work. The basic requirement for all web developers is a thorough understanding of programming with fluency in multiple computer languages, like JavaScript, Java, and Ruby, for example, and digital multimedia tools such as Illustrator and Photoshop.

Why is web development such a fast-growing profession?

Web developer is on pretty much every industry insider’s careers-to-watch list. Almost 40,000 more jobs will open up in the next decade, primarily in cities like New York, Chicago, Los Angeles, San Francisco, Seattle, Washington DC, Minneapolis, Boston, San Jose, and Portland. According to the Bureau of Labor Statistics, job growth in this field is estimated at a phenomenal 27 percent between 2014 and 2024, which is four times faster than the average growth rate for all occupations.

What special skills are needed to be a skilled web developer?

Being self-motivated is the primary personality trait people need to succeed in this profession, Pleasant says. “Some guys get out of school with all A’s in their classes, but in six months everything they know is old stuff, and they’re struggling. You need to constantly be learning. Almost every day I go home and look up what I did at work to see if there’s a better way. You have to stay on top of the technology; it’s changing all the time.” Pleasant adds, “It helps if you’re a fast learner, with good problem-solving skills.”

According to the Bureau of Labor Statistics, other important qualities for successful web developers include:

• Focus: being able to sit at a computer and write detailed code for long periods.
• Creativity: being able to create innovative designs.
• Customer-service skills: being able to respond promptly and helpfully to user questions and requests.
• Detail oriented: because a tiny error in coding can disable an entire webpage.

What about web development just “bugs”?

Pleasant loves “taking an idea from the client’s head and making it into a reality. I like seeing people use the things I create,” he says. But interacting with clients who may not have a clear idea of what they want (or what’s possible) isn’t always easy. The worst part, he says, is explaining the development process, how things work, and how much projects cost every time he works with a new client. What I don’t love, he says, “is educating every new client; it’s a pain.”

“Every day is a little bit different,” explains Pleasant. His daily tasks generally involve programming and scraping data — “pulling info from one server and putting it in another,” plus graphic design and making applications that “do whatever the customers want.”

Pleasant’s five-year plan is to start his own business offering subscription-based services that use applications he’s created.

The world’s first web page was created in 1991, only 28 years ago. It is boring and primitive, but it helped launch so many new careers. If your teenager wants to create a more beautiful and intelligent page than the other 4.62 billion networked pages that followed it, web development might be their destiny.

This is part of a new series highlighting post-high school pathways to success for teens whose plans don’t include four-year college. These are careers with great growth potential that don’t require a four-year degree. Read our list of 42 up-and-coming careers that don’t require college (and 10 to avoid) and read our other career spotlights on dental hygiene, radiology technologist, and photography direction.