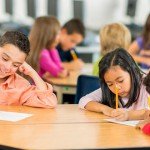 Is a Core Knowledge school right for your child? Learn what this rigorous academic program is all about and the pros and cons it offers students preK to 8.

A class of fourth graders gathers on the floor in Debi Madsen’s art class at Peach Hill Academy — a Core Knowledge school in Moorpark, CA. Before dispersing to desks to work on their own architectural models, the students discuss some key points that they have learned about cathedrals: the difference between a symmetrical and an asymmetrical design and why one spire on the Chartres Cathedral in France is more streamlined and modern-looking than the other.

A hand shoots up. “Do you know if there are any cathedrals nearby?” a girl asks.

Their study of Greek architecture in second grade and of Roman architecture in third has prepared the students for their current look at architecture around the world. Madsen expounds on the length of time it took to complete the stained-glass windows in the cathedral.

“Imagine working on the same art project for 50 years — the perseverance,” Madsen says, interjecting one of the “core values” emphasized in Core Knowledge schools.

Building on prior knowledge like this is a daily occurrence at Peach Hill, one of over 750 schools across the country using the Core Knowledge program.

The birth of Core Knowledge schools

Decades before “Common Core” became a familiar term in education policy, in the late 1970’s, E.D. Hirsch, Jr., then a professor at the University of Virginia, posited that there was a core body of knowledge that students need to acquire — and that the more students know, the more they are able to learn (One of the Core Knowledge’s mottos is: “Knowledge builds on knowledge.”). Further, Hirsch suggested that students — being given specific guidelines on what they learn at every grade level and making them more “culturally literate” — would receive a more equitable, fair, and rich education.

Hirsch’s work has received particular support from political conservatives, who applaud his belief that students need to learn specific facts, theories, ideas, and events in order to become thoughtful, informed, and educated adults. Hirsch noted in his book, The Making of Americans that while he is a political liberal, “I was forced to become an education conservative.” Hirsch continues: “Logic compelled the conclusion that achieving the democratic goal of high universal literacy would require schools to practice a large measure of educational traditionalism.”

What sets the Core Knowledge curriculum apart from the curriculum in a traditional school is the specificity of the standards. The curriculum is intensely rigorous. Instead of just learning how to write, students are, for example, writing about the founding fathers or important rivers in India.

Another difference between a Core Knowledge school and what children might experience in another school is that art and music are essential elements of the Sequence, not add-on subjects that are sometimes squeezed out because of funding cutbacks or other priorities.

While it might be easy to confuse the Common Core State Standards — which most states have now adopted — with a Core Knowledge curriculum, foundation leaders are quick to note that there is a clear distinction between the two. Standards state what children should know and be able to do at the end of each grade level. A curriculum is what children need to learn in order to meet those standards.

Even so, Peach Hill Principal Vicky Yasenchok believes that there is a close match between Core Knowledge and the Common Core, which will make the school’s transition to complying with the standards much easier. For example, the Common Core increases students’ time spent on “informational text.” Core Knowledge already emphasizes non-fiction work.

Today, the Foundation supports a network of 770 schools in 45 states and the District of Columbia with instructional materials and professional development workshops. There are also more than 400 preschools using the Core Knowledge Preschool Sequence. The Core Knowledge materials are also used by homeschoolers, and the Foundation publishes a series of What Your___Grader Needs to Know books to familiarize parents with the Sequence.

Schools using the Core Knowledge Sequence are as diverse as schools in general. They are in urban, suburban, and rural areas. There are Core Knowledge traditional public schools, charter public schools, private, and private parochial. They range from those with high proportions of students on free and reduced-price lunch to those that resemble elite, private schools.

Is a Core Knowledge education right for my child?

What do supporters say?

Supporters say that Core Knowledge provides students with specific, organized information and that it keeps students from having to repeat material or miss out on essential information.

As a teacher, Madsen feels the program inspires students to seek out more information outside of class. “I like that the children want to continue learning,” she says. “I hear, ‘we planned out family vacation so we could go see ‘Starry Night.’”

What do critics say?

Some critics of Core Knowledge say that with such a rigid curriculum in place, it lacks an individualized approach to teaching children and doesn’t take children’s unique learning styles into consideration. Further, parents looking for a project-based program for their child won’t find one in a Core Knowledge school, which favors more traditional schooling over exploratory project learning.

Some have said the curriculum falls short in giving students the 21st-century skills they need to compete in a global economy, and teachers might complain that there is not enough time to cover all the material that is required. Some criticize the program saying it promotes rote learning and squelches creativity — although others counter it doesn’t at all.

Finally, there is concern that the Core Knowledge curriculum may not blend or is in conflict with a district’s curriculum mandates or required state tests.

What does the research say?

So do students in a Core Knowledge school know what they need to know to do well on those assessments?

At Peach Hill, for example, the staff works to make sure they are covering both the Core Knowledge Sequence and the California state standards.

Research on a sample of Core Knowledge schools in Maryland indicated that it is possible for those using the Sequence to succeed in improving standardized test scores. But the five-year study, by researchers at Johns Hopkins University, also showed that certain conditions improve the chances that implementation of the program in a state with high-stakes assessments will go smoother. Those conditions include support from the district, low teacher mobility, and extra funding for common planning time, materials, and participation in Core Knowledge conferences. It’s also important for the school to be succeeding at teaching basic reading and math skills that are not covered by the Sequence.

The most recent study comes from New York City, where a group of 10 elementary schools has been using a new Core Knowledge Reading Program curriculum in kindergarten through second grade. The study finds that in second grade, reading comprehension scores in the 10 schools were significantly higher than in a comparison group of 10 schools. Scores in science and social studies were also higher. The study, however, also showed that the differences between the two groups of schools decreased by the third year.

Core Knowledge, Yasenchok says, can be and adapted to meet students’ needs, fit with other school programs, and blend with teachers’ interests just like any other curriculum. But it takes skilled teachers, such as Peach Hill’s Paula Cirillo, who successfully integrates Core Knowledge with stories from the Magic Tree House series.

While Core Knowledge provides students with a solid foundation in learning, the school is also part of a district that provides the latest classroom technology, making sure students have the skills they need to advance and use what they’ve learned in today’s world.

As Yasenchok puts it, Core Knowledge is “a piece of who we are.”

As with any school you’re considering for your child, visit the school! Talk to other parents whose children attend (or attended) the school for honest feedback. Finally, ask yourself, “Is this the right school for my child?”