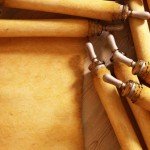 How you can help at home: Learn about an important aspect of Egyptian culture and art by creating your own scroll.

Create your own Egyptian scroll

This activity will help children explore different issues in creating narratives in art and text, as well as learn about an important aspect of Egyptian culture.

How the Egyptians did it

Few Egyptians knew how to read and write. Egyptian scribes, who could do both, had to be artists to create the up to 6,000 hieroglyphs that made up hieroglyphic writing.

The Egyptians used a special kind of writing material called papyrus to make their scrolls. The scrolls were made in single pages, then 20 of them were joined together into a scroll stretching about 19 ½ feet in length, about half the length of a regular city bus.

How you can make a scroll

To make your own scroll, tape together, side by side, up to 20 pieces of 8 ½- by 11-inch paper sheets into a long scroll, or unroll up to 20 feet of paper from a roll of paper, or from computer banner paper, and cut off the length.

Planning what your scroll will be

Discuss the different kinds of writing that might go into the text of the scroll — will yours be about science, religion, history, adventure or poetry? If you wish, you may transcribe and illustrate a story you already know or create your own story. Next, talk about whether the scroll should just have writing or if it should also have pictures. Should the images and writing be written in long 20-foot lines horizontally along the scroll or should they be arranged differently? Should both the front and back of the scroll be written on? And how should the scrolls be unrolled as they were read — left to right or right to left? The answer will tell you which end to begin your writing! (The Egyptians wrote on one side of a scroll and unrolled it from right to left.)

Writing and illustrating your scroll

When you are ready to begin writing your scroll, use masking tape to keep open the part of the scroll to be worked on. Of course, all 20 feet cannot be filled with text and pictures in one sitting, so just do a page or two. You’ll have someone read your story aloud from the scroll at the end of this activity, so make sure the story is clear! Try using a hieroglyphic dictionary to make your story (or at least part of it) into hieroglyphs. At hieroglyphs.net you can see how to translate your words into hieroglyphs.

Who will be your scribe?

Now, ask someone to pose as a scribe and read your scroll out loud. He should sit cross-legged with the scroll on his lap, just like the Egyptians in ancient times might have done. Can your scribe understand what you wrote?

Dr. Mike Norris is Associate Educator in charge of family programs at the Metropolitan Museum of Art in New York.