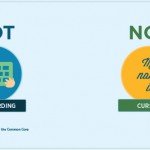 The Common Core Standards don't include teaching kids to write in cursive, but many states are including cursive in their teaching plans.

“Mommy, your handwriting is so good. How did you do that?”

A 10-year-old’s comment about her mother’s handwriting doesn’t seem like something to make one pause. But pause I did. You see, my daughter wasn’t looking at my current handwriting, but the curlicued script created in another educational era, from an assignment I’d penned when I was 8.

Cursive has been a matter of debate for decades, but it’s with the implementation of the Common Core Standards that children like my daughter — who finds cursive as mystifying and unattainable as cuneiform — may become the norm.

Under the Common Core Standards, adopted by 41 states and the District of Columbia, third and fourth graders are no longer required to curl over their dotted lines and scrawl loopy letters in exchange for scribbled stars in the margins. Instead, they will be expected to learn keyboarding in elementary school, a skill once relegated to the vaguely vocational sixth grade elective known as typing class.

The pen, not mightier than the keyboard?

Cursive advocates have raised cries of concern about losing the art that brought us the Declaration of Independence and our best Valentine’s Day missives. Plus, how will kids read their parents’ writing? What’s more, there’s science behind the scrawl: research suggests that the small motor skills required of handwriting support neurological development better than typing on a keyboard.

Some states have responded to the consternation. Many states, including Texas, California, Louisiana, and North Carolina, have moved to preserve cursive in their Common Core recipe as a part of the 15 percent rule (for adopting states, it’s understood that the Common Core will be 85 percent of the subject matter standards, leaving each state room to adopt up to 15 percent additional standards). And although Common Core doesn’t require cursive, many teachers dedicated to the practice will no doubt continue to teach it.

But with the new emphasis on keyboard skills, one shouldn’t be surprised to notice a slackening of expectations in children mastering those crazy capital I’s and the majestic G’s. The problem is that although formal cursive training may not be necessary in the cultivation of an educated human being, having bad, tortured, and slow penmanship is a real deficit. Children will be expected to write more than ever under Common Core — whether that means penning an in-class explanation of how you arrived at a math problem or taking detailed notes on a reading assignment — and much of this will not happen on a computer unless your child’s school has a specific 1-to-1 computer program or your child has an IEP (Individualized Education Plan) that allows them to use a device for everything.

Pen in hand, at home

Handwriting remains a relevant skill in many settings. But if clear, legible, fast handwriting is the ultimate goal, the cursive controversy can be somewhat misleading. After all, research suggests that print writing — a mixture of cursive or linked letters and printing — is actually the fastest, most efficient kind of handwriting there is. So if you see your child not getting enough dedicated practice to develop handwriting competency, then it might be worth helping them with some at-home drills like these or an app like this.

Finally, if your child’s penmanship skills are not getting as much attention, this does not mean they are slacking off. The new keyboard-related standards are nothing if not rigorous. By the end of fourth grade, students should be able to type a minimum of one page in a single sitting, and by fifth grade it jumps to two full pages in one sitting — something my eighth grader has just mastered this year. For many kids, these keyboarding standards may be quite challenging. Despite her passion for writing and technology, my fourth grader isn’t close to meeting this standard, so I can imagine she has plenty of company.

In the end, cursive — a technological skill that facilitated the use of two of the most important technological tools, the pen and paper — may live on more as art than praxis. This isn’t to diminish its beauty or historical value, but to read the writing on the wall: our children will no doubt occupy a world where writing continues to evolve and holding on to one way of writing over all the others won’t serve them. Who knows? Maybe our children will one day debate Common Core 200.0 as it drops keyboarding in favor of writing using thought-recognition software.