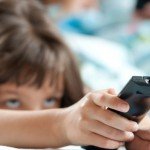 Advertisement
Parenting » Dilemmas, Emotional smarts, Health » Is there a TV in your child’s room?

Is there a TV in your child’s room?

Research shows having a boob tube in your kiddo's bedroom can be far more damaging than we ever knew.

Not cringing yet? In one study, kids ages 4 to 6 were asked whether they’d like to spend time with their dad or watch TV — 54 percent of them picked pixels over pops.

The stats, compiled by Statistic Brain and culled from a Neilsen survey are an unsettling reminder of the monumental space TV takes up in our children’s lives.

Along with these sobering stats, there’s an abundance of additional research that shows a link between having a TV in a child’s room and their health and academic success. Spoiler alert: it’s not good news.

Do most children have a TV in their room?

An estimated 71 percent of American kids ages 8 to 18 have a TV in their room. One study found 70 percent of third graders had bedside boob tubes. My childhood self is envious: as a kid, I campaigned relentlessly — and unsuccessfully — for a TV in my room. (I did, however, wrangle a red plastic lips phone.) And yet both of my brothers got in-room TVs. My partner also grew up with a TV in his room. All three boys were gamers — and I think these personal TVs were really strategies for getting Duck Hunt and Donkey Kong (and their infernal electronic beeping) out of the living rooms.

Turns out, this scenario may be pretty typical — the boys getting TVs, that is. A longitudinal survey out of Dartmouth — a telephone survey of 6,522 boys and girls ages 10 to 14 — asked specifically whether kids had TVs in their bedroom. In the first survey in 2003, 59 percent of kids had TVs in their room. The TV-havers were predominantly boys, minorities, and children in families of lower socioeconomic status.

Here’s the really bad news: researchers followed the kids and their parents two and four years later and discovered a TV in your bedroom is linked with both being overweight and continuing to gain weight. Two years in, kids with TVs in their rooms reported higher BMIs. After two more years, their BMIs had grown again. What’s particularly noteworthy is that obesity isn’t linked to the hours of TV being watched. It’s to the presence of the TV in their room.

Why? The study authors speculate that these kids see more junk food TV ads or have their sleep patterns disrupted by the light that TV emits. Certainly, having a TV in a child’s bedroom sets kids up to be sedentary and isolated — choosing, day after day and hour after hour, to be alone and immobile — an unhealthy way of life for any child. A private television’s connection to childhood obesity, the researchers observed, suggests that removing TVs from kids’ rooms may be “an important step in our nation’s fight against child obesity.”

Older studies reveal more troubling TV trends. Kids with TVs in their rooms read less, score lower on tests in school, tend to have sleep issues, and may be more likely to smoke in adolescence.

The hidden TV in your child’s room

Before parents who’ve never permitted a big glowing blue box, LCD, or flat screen into their child’s sanctuary congratulate themselves for standing firm, consider this: tablet ownership in families with young kids has exploded. In 2011, 8 percent of all families had iPads; in 2013, that figure was 40 percent, according to Common Sense Media. What’s more, as of 2013, 75 percent of children 8 years old and younger have access to a smartphone or a tablet. All of these findings add up to the fact that it’s never been easier — TV or no TV — for children to be transfixed by endless hours of videos on YouTube, TV shows on Hulu, and movies on Netflix from the comfort of their rooms.

What will be the outcome for this screen-saturated generation? Stay tuned.