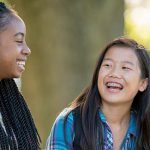 Inside the 8th grader’s brain

What's going on in your child's head? See what insights neuroscience can offer the parents of eighth graders.

“I am very deep, sensitive, and aware. But no one understands me.”

Hooray? This news is intellectually exhilarating, but there’s a caveat. Frances Jensen, neurology professor at Harvard Medical Center, describes teen thinking as, “paradoxical… these are people with very sharp brains, but they’re not quite sure what to do with them.”

Inside the eighth grade brain, the frontal lobe is growing and interconnecting. This is fantastic news, but patience is required: your child’s frontal lobe won’t reach full maturity and re-structuring until your child is 25 to 30 years old. So for the next 12 to 18 years, they’ll be lured toward risky acts they’re cognitively challenged to resist because they’re still heavily swayed by their limbic system, which is the emotional center of the brain.

This neurological surge is often accompanied by a fair amount of muddling and moodiness. At this age, kids can be increasingly interested in their peer group and express less affection with their parents. Your child might want both increased independence and gentle loving attention. They might ricochet quickly from high self-esteem to abysmal self-loathing or from one passionate interest to another.

Your eighth grader’s brain is developing the capacity to reason, remember, and learn from mistakes. Unlike younger students, who can be wholly focused on present sensations, eighth graders are beginning to understand the long-term consequences of their behavior. You might witness them curbing their procrastination, or going to bed at an earlier hour to be fresh for the next day’s test. Eight graders also have a greater capacity to set goals for themselves. Parents can help all children realize their dreams by guiding them to develop success attributes, such as self-awareness, proactivity, perseverance, goal setting, using a support system, and developing emotional coping strategies.

Young children’s brains are usually dichotomous — also known as absolutist — which means they see the world in black-and-white terms: something is all right, or all wrong. Ginger E. Blume, Ph.D., suggests, “children naturally use this mode… to learn about their world. It is an easy way for children… to organize.” But by eighth grade, children’s intellects are more sophisticated. They’re beginning to see reasonable justifications on both sides of an argument. Additionally, eighth graders are increasingly adept at verbally expressing their feelings and understanding other people’s opinions. These are signs of developing emotional intelligence, which parents can encourage in their teens.

What does it all mean?

Eight graders start thinking more deeply about the profound questions of existence, like “Who am I? Why am I here?” and “How can I save the world?” They start to form their own moral code, constructing values to regulate their conduct and guide their choices. The philosophy and ethics you illustrate as a parent are extremely influential. Children model themselves after their guardians. For example, studies show more than 50 percent of the population is, “affiliated with their parents’ religious tradition.” And 71 percent adopt social and political ideology that’s, “about the same as Mom and Dad’s.”

However, parents can’t just “talk the talk” — now is the time “walk the walk,” too. Children this age don’t pay attention to what you say, they model themselves after your behavior. Your own behavior can be a positive example in many situations, such as managing anger, being curios about the world, developing hobbies and passions, and everything in between.

Eighth graders are developing the computational and decision-making skills of adults. In terms of pure processing power, an adolescent’s brain is equal to an adult’s. The potential to assimilate and master information and learn new skills is never greater than during the teen years. That’s one reason eighth graders are sassy-mouth smart alecks: they realize they’re going to be as brilliant as their parents, and, in fact, might have already surpassed them.

They NEED their sleep

Adequate sleep is central to an eighth grader’s physical and emotional health. Teens need 9.25 hours of sleep per night. Unfortunately, surveys indicate only 20 percent of teens get this much shut-eye, with the average amount of sleep being about two hours less than kids really need.
The consequences of sleep deprivation are miserable — and dangerous. An exhausted eighth grader is frequently grouchy and quick-tempered, with debilitated concentration, memory retrieval, decisiveness, and creativity. Additionally, the sleep-deprived brain is more susceptible to impulsive behavior and risk-taking temptations, such as drugs, drinking, reckless activity, and unsafe sex. Sleep debt in teenagers is also correlated with depression and hormone imbalances. So please, help your eighth grader get enough sleep!