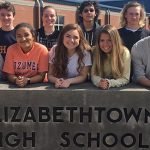 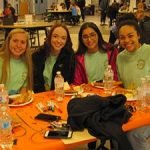 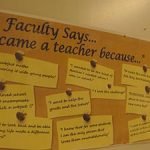 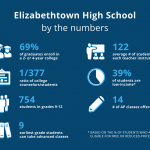 Focus on the future

Elizabethtown High School's recipe for success includes access to advanced classes, the expectation that every student can go to college, and lots of support outside of class, from Saturday tutoring to a place to do laundry.

After readily answering questions about their classes, teachers, and plans for the future, Ayesha Nasir and Kiara Jones hesitate.

What would they change about Elizabethtown High School?

Kiara, a senior who wants to be a veterinarian, says that if she has to pick something, maybe it’s the competitiveness. “Our senior class just broke our ACT record and now the juniors are so competitive they want to break it, too.” Another short pause, and then, “that’s not necessarily a bad thing.”

College: an option for all 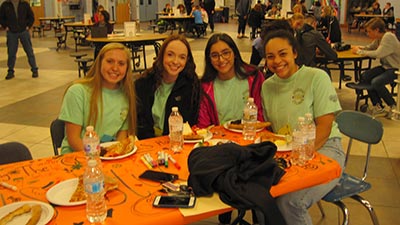 Ayesha and Kiara are seated at a table in “the commons,” a bright, welcoming space where Elizabethtown High School students begin each day. It’s Power Pact day, a spring tradition at Elizabethtown High School. Eighth graders who will attend the school in the fall meet with teachers to talk about their high school goals, while current students meet with teachers to review their progress toward college, career, or both.

Power Pact day is one of many intentional pieces of the puzzle that administrators, teachers, and students put together to make Elizabethtown High School one of the best high schools in Kentucky. About 97 percent of students graduate within four years. The average ACT score is 21 and nearly seven in ten graduating seniors enroll in college. About 23 percent of those students need remediation in college, and 81 percent of them return for a second year.

Elizabethtown High School’s student population mirrors that of the West-Central Kentucky city: The majority of the students (about 74 percent) are white, 13 percent are black, and 3 percent and 4 percent are Asian and Hispanic, respectively.

The one-story brick high school is located close to the city center on a sprawling campus. Although Elizabethtown High School was founded in 1900, the current school opened in fall 1971. There have been significant additions since: a state-of-the-art science center and a wing with facilities for band, choir, and art, and an athletic complex with a state-of-the-art video/scoreboard.

The town’s central location puts it within an hour-and-a-half of three public universities: the Universities of Louisville and Kentucky, and Western Kentucky University. A two-year public college in town, Elizabethtown Community and Technical College, offers associate degree programs as well as a number of technical diploma programs.

Recruiters from these and other colleges are present at Power Pact day, as are representatives from area businesses and industries. Principal Steve Smallwood says it’s part of an effort to communicate to students that they are not just attending high school, but defining their futures. The message to students, he says, is “How much bigger do you want your future to be, and how much better?”

When he came to Elizabethtown High School three years ago, Smallwood says, there were three academic tracks. ‘Honors,’ ‘College Prep’ and ‘College and Career Readiness.’ The third one, he says, was perceived by students as a non-college track. “That was not okay with us,” Smallwood says. “We got rid of that level, because we want all the kids to have the attitude that college is an option for them.”

Like most successful high schools, Elizabethtown High School offers students the opportunity to take AP classes. The school expanded the number of AP classes offered to 14 in the 2017-18 school year, up from eight two years earlier, in partnership with a program called Advance Kentucky, in partnership with the National Math and Science Initiative (NMSI).

They also eliminated requirements for enrolling; any student who wants to challenge themselves can choose from courses such as AP Physics, AP Statistics, and AP Human Geography. The goal, Smallwood says, was to encourage those students who might not think of themselves as AP students. This has almost doubled the number of students who enroll in AP classes, from 216 in ’15-’16 to 393 in ’17-‘18.

Support beyond the classroom 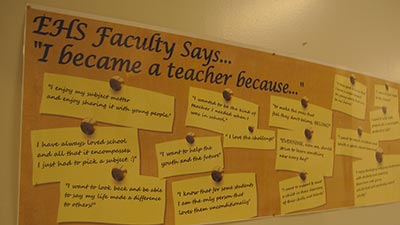 Sixteen percent of Elizabethtown’s 30,000 residents live in poverty — a rate higher than the county’s rate of 13.8 percent and lower than the state’s rate of 18.5 percent. The median household income in Elizabethtown is $44,568, about $2,000 less than the Kentucky median and well below the national median of $55,775.

With its close proximity to a large military base and to Kentucky’s largest city, Louisville, Elizabethtown has been home to a solid middle class that could expect their children to graduate from high school and go on to college as a matter of course. For decades, Elizabethtown High School has relished its reputation for providing a high-quality education on par with private “prep” schools, in a class above the public schools in neighboring districts. But teachers and administrators, many of whom both attended the school and have had children in it, are quick to say that societal changes in the last couple decades have presented new challenges to maintaining that reputation.

The incidence of students who qualify for free and reduced-price lunch has climbed from about 20 percent a few decades ago to nearly 40 percent of the student body today. B.J. Henry, assistant principal for academics, said that many parents struggle with multiple jobs just to pay the bills, some are in prison — Kentucky is one of the states most hard hit by the opioid epidemic — others are simply absent. Some students bounce from relative to relative or are homeless. “To have high expectations we have to put supports in place,” says Henry, to fill in the gaps that were rare less than a generation ago.

The gaps are filled in many tangible ways: an educational foundation provides money for special classroom equipment, grants underwrite the cost of AP exams, the district ponies up for buses to take kids home twice a week from after-school classes and extracurricular clubs and activities. There are monthly Saturday sessions for students who need extra help or just a safe, quiet place to study, and twice a week, students who need it get help building basic skills in math and reading.

Last year, the school bought a washer and dryer so that students who can’t do laundry at home can wash clothes at school. That soon expanded to providing shampoo and body wash so those kids could shower at school, too.

For several years, teachers and administrators have kept track of every student’s progress using spreadsheets to track attendance, grades, and test scores. This year, Elizabethtown High School began a more intense approach, using a screening tool that assesses risk by tracking seven different behaviors and social/emotional characteristics throughout the year. Karl Olive, assistant principal for student services, said that with the screener they hope to be able to identify and intervene earlier with those students who “slowly kind of fade away from what they need to be doing.”

As critical as these data-driven approaches are, Elizabethtown High School’s intangible but vital secret is relationships. Smallwood wants all of the adults at the school — counselors, administrators, teachers, staff — to communicate this message to students: “I’m doing this because I want to help you.” 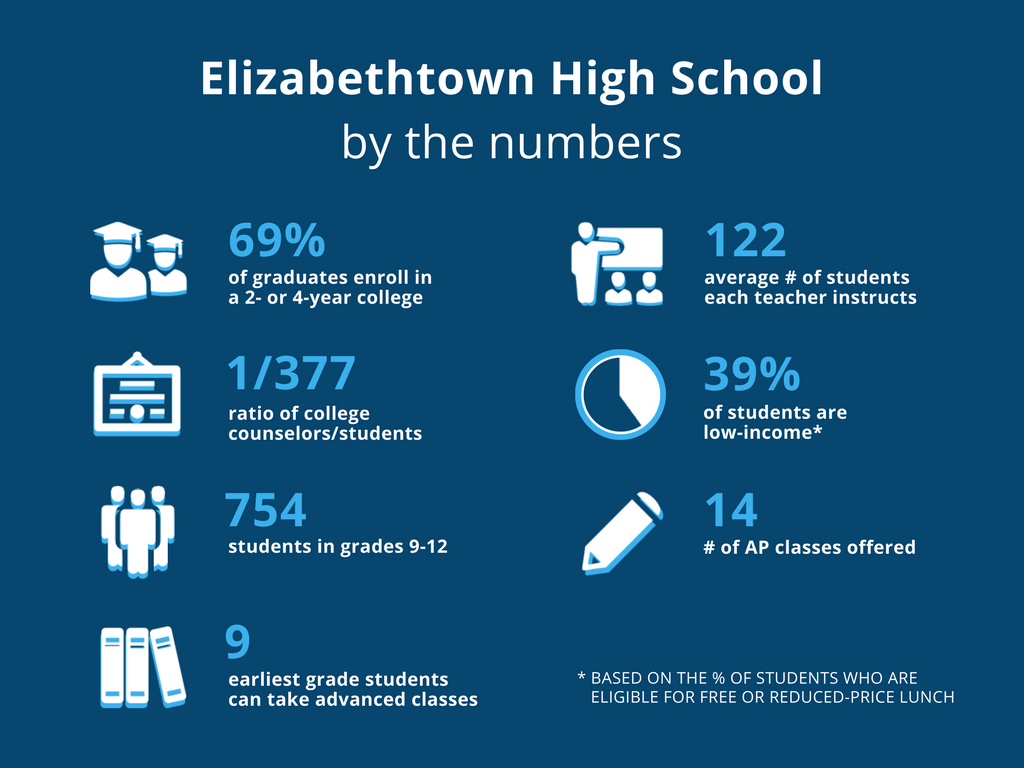 GreatSchools’ College Success Award honors public high schools in nine states that are doing a great job of preparing students for postsecondary success. Learn more about the award, see the list of winners, and read about more award winners here.