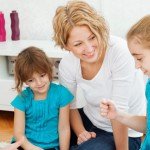 Look for license plates or get rhyming with these summer word games.

The long and lazy days of summer don’t have to soften the brain. Keep your kids’ neurons firing with these six word games that build vocabulary, work out memory, rev up critical thinking, and stimulate creativity.

An extra perk: These mental acrobatics are great to have in your parental tool kit to stave off boredom during long drives — or any time you’re looking to keep your kids both amused and alert while school’s out.

This classic road-trip boredom buster is also a zippy brainteaser — but easy enough for younger kids to join too.

Look for each letter of the alphabet on other cars’ license plates. Check them off a master list — finding the letters in any order (easier for younger kids) or in alphabetic order. You can play this game competitively, so that whoever finds all the letters first wins. Or play as a team: Time yourselves to see how fast you can get through the alphabet, and then try to beat your previous record.

Extra challenge: To made the game even more of a brain twister, add a “word jumble” component — write down all the letters in the next 5 to 10 license plates you see. The winner is whoever can form the most words from that set of letters.

Even though this is an easy game for younger and older kids to play, “First letter, last letter” is a fun way to teach children to think fast. The first person starts by saying any word, and then the next person has to come up with a word that starts with the last letter of the previous player’s word.

Extra challenge: Clap your hands on a regular beat. Players must say the word on the beat, otherwise they’re out. You can increase the clap tempo as players get eliminated, so that the final two will have to fire words back and forth lightning fast.

Turn your kids into the next Will Shakespeare with this rhyming game that can be simplified for preschoolers too. A player names something he or she sees out the car window (or in a room), and the other players have to say a word that rhymes with it.

You can play with points (the first person who calls out a rhyme gets a point) or by elimination (whoever can’t think of a rhyme in a certain number of seconds is out). For the youngest kids, simply asking for words that rhyme with things you point out is a game in itself.

I’m going to the moon

The first player names an object he or she is bringing to the moon (or Timbuktu or Old Aunt Alice’s house — whatever destination strikes your kids’ fancy), and the next person repeats that object and adds another one to the list. Players who make a mistake repeating the list are out. The winner is the last one left.

To the moon! Instead of adding items, players have to figure out the secret of what kind of objects they can bring — whatever the first player decides this will be (such as the number of syllables in a word, green things, going alphabetically backwards, etc.) The player who figures it out gets to start the next round.

(Hint: In this case, words have to be three syllables.)

The first person says a sound or syllable, and the second person adds a syllable (or syllables) to complete it. Then they both say the word together:

This a great way to practice roots and syllables — there are, of course, lots of ways to “complete” the first syllable, and the person who starts may have a different word in mind than the second player’s.

For example:
Player 1: “Ru-”
Player 2: “Ru-push?”
Together: “Rupush!”
Player 2: “‘Rupush’ is smelly green fuzz that grows on bicycle seats if they go unridden for too long.”

Make up a story, one alphabetical sentence at a time. The first person begins the tale with a word starting with A, and each player, continuing clockwise, starts the following sentence with the next letter of the alphabet.

For example:
Player 1: “Arlo was a donkey that lived on a farm.”
Player 2: “Born with a purple tail, he had always been an odd donkey.”
Player 3: “Curious about why his tail was purple, Arlo set out on a journey.”

There are no right sentences as long as they start with the right letter. So no correcting the player before you — just accept his or her addition and see where the story leads! And remember: The last sentence starts with Z.