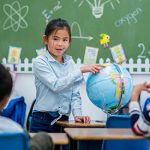 Your fifth grader and social studies

Students study Native tribes, revolutionaries, and others as they explore our country's chronology.

Who recalls the dates of the Byzantine Empire? Or that the Ohlone Indians spoke one of the Utian languages? Details from social studies are easy to forget once we graduate to the real world. Still, such primers in history, geography, politics, and anthropology are crucial to our children’s education, even as early as the fifth grade.

In the fifth-grade classroom

Fifth-graders focus on the United States. Students begin with Native Americans, then study the 13 colonies, the American Revolution, the Civil War, and the building of a new nation. Because social studies includes the study of history, geography, economics, and civics, it is often integrated with other areas of the curriculum. For example, students might be expected to recreate a colonial-era newspaper for a language arts assignment, while a science lesson might focus on how Native Americans grew corn.

Students learn to explore cause-and-effect relationships; compare past and present events; and make and use timelines, graphs, charts, and maps to interpret historical data. Technology is often integrated, as students use the Internet to facilitate their learning.

Tonya Breland, a teacher who received the Milken Foundation National Educator Award, stresses the need to integrate social studies with children’s own experiences. “Children enjoy learning social studies most when it relates to their personal lives,” she says. “As they learn about the history of their state and the early history of our country, it is important that they see the connection to their own life and culture. Social studies is inclusive of culture, customs, traditions, and history.”

Children should learn about the Native Americans who lived throughout North America, studying their crops, hunting traditions, homes and structures, trading practices, and rituals and ceremonies.

Fifth-graders should understand how the geography of regions influenced the way tribes lived. Your child may read tales and creation myths and visit museums and art galleries to see Native American artifacts and paintings.

Fifth-graders learn about our country’s earliest explorers — their backgrounds, hardships, and motivations. Students should plan on comparing Native Americans to the explorers and understanding the impact the explorers had on Native cultures. They may chart the arrival of the explorers with a timeline and draw their routes on a map. Your child’s class may also study the westward movement.

Students learn about the 13 colonies, including the story of how they were settled, the challenges colonists faced, and the routines of everyday life. Children learn about early settlers including John Smith and William Penn. Many teachers compare the individual colonies as well as colonial and modern-day life. Kids learn about the origins and development of slavery and the colonists’ relationship with Native Americans. Classes might perform plays depicting early colonial life or organize a trade fair.

The American Revolution plays a central role in a fifth-grader’s education. Children should learn to explore the causes of the revolution, looking at the events and individuals involved, maybe looking at political cartoons from the time period or researching revolutionary leaders. Students will learn how the revolution was fought and won by studying its most important battles. Your child should be able to understand the difference between Loyalists (those who remained loyal to England) and Patriots (those who wanted independence). By reading historical novels and biographies from the time period, students can better understand the context surrounding the Declaration of Independence. Children might also participate in a reenactment of the Boston Tea Party or the ride of Paul Revere, and explore their effects on American history.

Students should learn how a new nation grapples with the task of establishing itself by exploring the way the founders resolved problems. Your child might research the Articles of Confederation, the Constitution, and the Bill of Rights. Students will learn about the three branches of government (legislative, executive, and judicial) and study the inauguration of the first president, the development of the first political parties, and the way the nation’s standing in the world was affected by diplomacy and war. Children should be able to cite the contributions of major political leaders including Thomas Jefferson and James Madison. They should map the expansion of the country and learn about the Louisiana Purchase, the Lewis and Clark expedition, and pioneer life. Students might participate in a town meeting by discussing real problems and trying to solve them.

When it comes to the Civil War, students in fifth grade should be able to explain the causes, major events, and consequences. They’ll learn about key people, like Abraham Lincoln and Ulysses Grant, and important documents, such as the Emancipation Proclamation and Constitutional Amendments 13, 14, and 15. Teachers should include a lesson on Reconstruction plans and the social and economic impact of slavery. Students may take part in a debate of the war and read letters and biographies from the time.

Current events are front and center in many classrooms — children examine the news using TV programs, newspapers, or the Internet. Classrooms might discuss how  events affect life, now and in the future, and may compare them to past events. Discussing current events raises students’ awareness of the world around them and helps them connect the present with history and with information learned in other subjects. Being conversant with current events improves students’ ability to think critically and analytically. Their comprehension of nonfiction topics will also be enhanced, not to mention their motivation to be a lifelong reader.