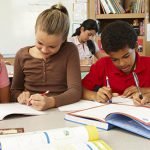 Inside the 5th grader’s brain

What insights can neuroscience offer parents about the mind of a fifth grader?

Classic statement of alienation, huh? By fifth grade, your child’s brain has created a unique "self" due to its one-of-a-kind neural pathways. The upgraded analytic ability also enables fifth graders’ noggins to become keenly, painfully aware of how they fit, or don’t fit, into certain social groups. Partnered with dramatic imagination, your child may feel lonely and unaccepted, a social failure with fragile self-esteem.

The reason for all this fifth grade angst? Your child’s friendships are probably rising in importance. This shift toward friends can make things alarmingly nasty if accompanied by peer group pressure, cliques, jealousy, possessiveness, and bullying. Children who feel rejected in the savagely swirling fifth grade frog pond can become melancholy and nervous. What can you do?

You can’t keep your child from trying to locate their place in their peer group. Children this age need to discover how their "self" fits into the world — in terms of gender, social status, ethnicity, and belief systems. During this traumatic tween time, parents can be loving and wise guides, offering advice and support to boost their quavering egos. That’s why it’s helpful to know, anatomically, what’s changing in their evolving fifth grade brains.

By fifth grade, the brain is slowing its previously furious development of new axons and dendrites — thus reducing its openness to new connections. However, the brain is also accelerating the myelination process that builds sheaths around axons, speeding up the neural pathways that are already well established. The consequence of this shift is that abstract thinking (like algebra) becomes easier, thanks to increased quickness, efficiency, and capacity of information processing, plus integration of brain regions. But the wind-down in new connections can reduce an ability to learn a new language. If your fifth grader wants to forge ahead in math at this time, don’t hold your child back. Conversely, don’t be frustrated if your child is slower memorizing those Spanish conjugations.

The brains and the brawn

A University of Illinois (Champaign-Urbana) study indicates that 10-year-olds who are physically fit perform better on a variety of cognitive tests than their out-of-shape peers. MRI scans determined that the hippocampus — a brain region that contributes to spatial reasoning and memory — was 12 percent larger in the children who exercised. Conclusion? Engage your child in physically challenging activities, from 30 to 60 minutes per day. Team sports are superb for fifth graders, and parents should work out with them, if possible, to provide healthy role models.

Fifth graders should not be over-exposed to violent episodes of murder, bloody mayhem, rape, and general violence, in any real or imaginary form. So don’t devote the bulk of your dinner table conversation to violent news topics, and keep real and screen-related violence to a minimum. Scary scenarios that create traumatic stress in the child release cortisol in their brains, a hormone that can weaken the immune system and structure of the hippocampus. You can also reduce the threat of violence in the home by avoiding conflicts where family members yell at and physically hurt each other. Studies show that children in chronic stress regard the world as an unsafe place and that this distraction impairs their learning ability.

Many fifth graders love nothing more than devouring unhealthy "junk food" and soda pop, because the pleasure centers of their brain develop sooner than their ability to calculate long-term consequences. They’ll beg for it. But don’t cave in: fast food contains chemicals that can disrupt their hormonal secretions. Instead, guide your child towards wholesome, healthy food — and explain that it fosters brain development. Go for fruit, vegetables, whole grains, lean protein, low-fat dairy, and healthy fats within three nutritious meals daily — and snacks in between to keep energy levels up. (Learn about other tasty brain foods kids will love.) Avoid the obesity that weighs down almost 20 percent of U.S. children this age. Studies show obesity can eventually cause a decline in the brain’s cognitive abilities, particularly in learning and memory.

Researchers at Indiana University School of Medicine in Indianapolis used MRI to view brain regions that were stimulated when kids played an assortment of video games. When kids played "Need for Speed: Underground" — a non-violent game — activity in the frontal area was observed; this zone is associated with concentration and self-control. But when kids played "Medal of Honor: Frontline" — a violent game — there was no frontal area activation; instead, the amygdala was excited, in the least-cerebral, "reptilian" part of the brain. The amygdala is associated with emotional arousal, especially anger, and is responsible for aggressive, impulsive behaviors. Repeated "firing up" of reptilian zones could "hardwire" a developing brain for less self-control. If you purchase video games for your kid, make sure the focus is on racing or skill, not violence.

Growth in the fifth grader’s prefrontal cortex accelerates as the brain prepares for adolescent changes. Yikes! Your child is probably sliding into adolescence now, especially if she’s a girl. Don’t delay! Inform her or him about all the physical changes of puberty: breast development, pimples, bras, pubic and underarm hair, menstruation, larger testicles, etc. Fifth graders might want a private area, like in a locked box or drawer, for secret items or a journal. The need for personal space also includes a quiet, clean, individualized place for homework, time alone in their bedroom, and more independence.

Fifth grade boys and girls are often quite hostile to each other. This rudeness has a neurological excuse. A National Institute of Mental Health studyrecently revealed, via MRI scanners, that girl and boy brains, at this age, are wildly dissimilar in the structure of their cerebral cortexes. Girls are often taller than boys at this age, with superior fine-motor skills. Girls also tend to be vastly more mature. The NIMH discovered that the inflection point (a halfway mark in brain development) occurs in females just before they turn 11, but dawdling males don’t get there until they’re nearly 15.

Strengthened interconnectedness in fifth grade brain architecture improves ability in planning, problem solving, and information processing. This upgrade allows kids to recognize that authority figures are not always right, a new insight that could mean they defy or ridicule adult authority when they hadn’t before. An interesting epiphany, but not advantageous to parents! To combat this insurrection, make your rules clear and carefully explain your reasons. Talk about respect and how you expect to get it, involve your fifth grader in household chores, and inform your child that he’s now mature enough to be responsible for his actions.

A fifth grader’s evolving, disoriented brain with shaky self-esteem requires firm, but gentle guidance from diligent adults. Developmental psychologist Diana Baumrind, author of the paper, “Effects of Authoritative Parental Control on Child Behavior,”(1966), recommends "authoritative parenting” because it provides consistent, compassionate, goal-clarifying direction and allows the child to build self-esteem by making intelligent choices. Over-controlling “authoritarian” parents who scold incessantly can instill a sense of inadequacy in their offspring, and over-indulgent “permissive” parents that heap praise without justification just give their kids a false sense of attainment.

Children’s brains at this age can waffle wildly between recklessness and paranoia. Tell the timid ones that it’s alright to make mistakes and encourage them to try new experiences and challenges. Conversely, warn the daredevils about drugs, smoking, alcohol, and skateboarding without a helmet, emphasizing the catastrophic harm that can happen to their most prized possession: the mind.