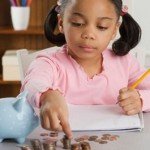 The authors of The Financially Intelligent Parent recommend giving your child an allowance - but don't tie it to chores.

Jon and Eileen Gallo, authors of The Financially Intelligent Parent: 8 Steps to Raising Successful, Generous, Responsible Children advocate allowances as a tool to teach financial literacy to children. Furthermore, they believe allowances should not be tied to doing chores, reasoning that children need to learn to contribute to the household and to develop a work ethic independent of material rewards.

GreatSchools.org Staff Writer Marian Wilde asked the Gallos for guidance on some of the thornier aspects of allowances.

Marian: I give my kids allowances. My 9-year-old gets $5 a week and my 14-year-old gets $10 a week. (And I’m finding that this might be too little.) My 9-year-old wants to know why he isn’t getting the same as his older sister. Do you have advice for parents on this issue of parity between siblings?

Eileen: I would just say that he’s the younger. That’s the reality, that he’s younger so he gets less money.

Jon: May I respectfully disagree?

Eileen: You may certainly disagree.

Marian: Now, this is getting interesting.

Jon: I think of an allowance, and I think Eileen does too, in terms of a tool that’s designed to teach a kid to think reflectively. If you go to our Web site, you can download what we call our allowance tracker. It’s a spreadsheet that allows you to keep track of what you’re spending on your kids for about two weeks. You keep track of your spending for two weeks and then you decide which of those items you’d like the child to become responsible for. So for the 14-year-old, if you’re spending $10 a week on video games, and this is just hypothetical, you might decide that video games are something that you’re no longer willing to pay for. Instead you’re going to give your child an allowance of $10 a week.

Eileen: But we do also encourage saving and putting some aside for charity.

Jon: So you’d give them $12. You’d say, “I want you to put $1 away for savings and $1 for charity. And now you’ve got 10 bucks which is what we were spending for you on video games and now you’ve got the choice of how you want to spend it.” Now she’s got to make a choice and to think in terms of alternatives and consequences, and she also understands what the allowance is for. So if you did the same thing for your 9-year-old, you’d say, “I’m spending $7 a week on you.” You give him the $7 and he says, “Why am I not getting $10?” Then you can say: “I’m spending a different amount on each of you for different things and you are responsible for your baseball cards, or whatever it is, and your sister is responsible for the video games.” It’ll make both kids understand why their allowances might be different.

Marian: I also told them that they had to buy birthday presents for family members and friends with the allowance.

Marian: How do you feel about deducting money from a child’s allowance as a punishment?

Eileen: Then the child can come away having a negative experience about money.