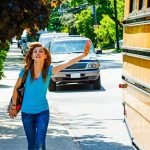 Advertisement
Parenting » Emotional smarts, School life » What not to do on the first day of school

What not to do on the first day of school

Think you're supremely unprepared for the fall grind? Think again. Chances are you've got some competition from the Mayhem family. Check out our expert tips to avoid your own back-to-school nightmare.

The Sunday before Day One at our twin sons’ new middle school, we caught a morning flight from Miami to San Francisco. My husband wanted to save money with a redeye flight, but I put my foot down. The kids need to get ready for school, I told him. I thought my plan would give us time to get home for frozen pizza, hose the sand out of their hair, and buy two of those new Munch Boxes with self-cooling thermology they’d been nagging me for.

As it turns out, the plane was late, so we had to skip the family dinner and school supply shopping. But that’s why God invented fast-food takeout and paper bags, right?

After 20 consecutive days at the beach, Sammy started whining about not wanting to go to sixth grade. I tried to brace him: “Honey, you’re not going back to elementary school, so you better get used to it.” My wise counsel didn’t have the intended effect. Somewhere over the Rockies, he began whimpering, and when he saw the silhouette of San Francisco in the sunset, hyperventilation took hold.

“Do you know how many deprived kids around the world would happily eat their shoes to attend your school?” I pointed out.

“Then let them!” Sweat appeared on his upper lip.

I started to panic too. “You need to get a hold of yourself,” I said through gritted teeth. “I have to go back to work tomorrow.” The flight crew was giving us the eye. “I’ll give you a new iPod if you can just calm down.”

Jacob wasn’t complaining, so I assumed he was ready for his new life in middle school. Granted, he’d been playing video games 24/7 until blisters appeared on his thumbs. When he was asked to put away his Game Boy at takeoff, the nervous energy had to go somewhere. His legs began jiggling with maniacal intensity, and I tried to distract him by suggesting he do the math problems he’d been asked to complete over the summer.

Nothing worked until my husband threatened to take away his Game Boy. That roused his inner Einstein.

By the time we got home, both kids were complaining that they wanted a treat for the last day of summer. I let them stay up until 11:30 watching Star Wars III: Revenge of the Sith.

The next morning was like Mr. Toad’s Wild Ride to hell and back. We slept in. I surprised the boys with matching school outfits their grandmother had sent. They burst into tears. I explained they had no choice but to wear them anyway because nothing else was clean.

There wasn’t enough cereal for breakfast, so I announced a special treat: an Egg McMuffin morning! On the way to school, the boys were supposed to brush their hair, but Sammy spilled his orange juice on the brush, and Jacob retaliated by “accidentally” dropping his milk on Sammy’s backpack. It was inevitable both boys would arrive on their first day smelling and looking like they’d crawled out of a compost heap. By the time Jacob realized he’d forgotten his math homework and Sammy informed me that he would be requesting that the principal fail him retroactively so he could go back to fifth grade, I began wondering where I had gone wrong.

When I finally double-parked in front of their new school, swarming with 2,000-plus kids, the boys just stared out the window like they were being pushed out of a shuttle over the moon. Again, I tried to calm their fears. “Look at these thousands of nice kids. Think about all your great classes — like trigonometry.”

“You know what I mean. Now have a great day!”

As I pulled away, I realized their lunches were still in the back seat — kids these days.

Don’t want to follow in the Mayhem family’s footsteps? Child and education experts weigh in on how to prep kids for a drama-free first day: