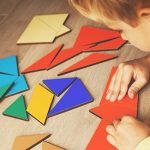 Your first grader and math under the Common Core Standards

Remember the shape puzzles your child toyed with — using triangles to make squares and rectangles? Turns out, that was good practice for first grade math.

By the end of first grade, here are the 11 math skills your child should learn:

Counting to 100 — that’s for kindergartners. First graders count to 120, but the catch is that they can start from any number, like 72, and count up to 73, 74, 75, and so on. Kids also learn to subtract numbers up to 20, like 19 – 7 = 12. Students learn to solve word problems using objects, drawings, and, yes, even equations. For example, if Ted has 4 pencils, Danielle has 6 pencils, and Vicki has 9 pencils, how many pencils do they have all together?

Your first grader may first draw this problem and count the pencils, but by the end of the year she’ll know the equation — and how to solve it.

First graders also learn the relationship between counting, addition, and subtraction. For example, counting from 1 to 2 is the same as adding 1 + 1. Adding one more means counting up one, and adding two more means counting up two, and so on. Likewise, subtraction can be thought of as counting down or backward. Taking that a step further, kids learn to think of subtracting as the reverse or “undoing” of adding. So, for example, if 15 + 4 = 19, then 19 – 4 = 15.

Everything in its place

One strategy your child will learn is to add the tens and ones separately.

And sometimes, it’s necessary to create a ten from the ones.

Your child will also be expected to figure out in her head — without counting — how to find 10 more or less than another number. If Jemma has 68 lollipops and gives away 10, she should know that’s the same as subtracting one group of tens, leaving her with 58 lollipops.

How does this measure up?

First graders should be able to explain how long two objects are by comparing them to a third object. For example, the first piece of paper is shorter than the second piece, but longer than the third.

Kids start applying the concept of addition to measuring things. Let’s say your child uses the dog’s tail to measure the length of a blanket; he might find that the blanket is 5-and-a-half tails long. This is great practice for when the kids start using rulers.

First graders also learn to tell time (and write it down correctly, like 1:30 pm) to the nearest hour and half-hour by reading both digital clocks and the old-fashioned round clocks with minute and hour hands.

First graders delve into the properties of shapes by combining two shapes to form a new one, such as putting two triangles together to make a square or rectangle. They’ll do this on paper (2 dimensional) and with objects (3 dimensional).

Kids also learn to divide shapes into or two or four equal parts and learn the words for those parts: halves and quarters (or fourths).

So break out the blocks and Legos and have a blast while you can still practice all of your child’s math skills at home while playing on the floor.

• See what knowing the ones and tens places looks like in this first grade math Milestones video.

• Can your first grader solve a word problem like this?