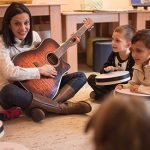 Your first grader and music

In your child’s classroom

In first grade your child develops her singing voice and rhythmic skills. She plays instruments and moves to the beat. Through these activities she learns the artistic, cultural, scientific and mathematical foundations of music.

Research has shown that the benefits of music education include improved reading and reasoning ability, self-esteem and vocational preparation. Paul Bakeman, our teacher consultant and award-winning music teacher, adds: “Recent research done at the University of California, Irvine, indicates that young children involved in consistent music instruction have a greater ability to grasp concepts that are also essential to the understanding of math and science.”

Music may not be taught as a separate subject in some schools, but most states require that it be included in the curriculum. Most states have music standards that are based on the National Standards for Arts Education.

First-graders sing songs with repetitive words and melody patterns, such as nursery rhymes and folk songs. Many songs will be connected to the holidays. Others reinforce what your first-grader is learning in class, such as songs about neighborhoods, money or shapes. Typical songs include “Down by the Bay,” “Jim Along Josie” and “She’ll Be Coming Around the Mountain.” Your child learns to blend his voice with others by singing in a group and develops his own voice by singing alone.

“First-graders love to sing alone and will jump at the chance to use expressive voices to dramatize a story,” Bakeman says.

Your child learns to sing expressively, on pitch (high and low) and with correct dynamics (loud and soft). He sings an increasing number of songs from memory and with improved accuracy. The class plays singing games that combine music and movement.

Playing and listening to instruments

“First-graders are able to make connections between math and playing simple rhythms on instruments that sound on the steady beat and sound on subdivisions of the beat. Quarter-notes are the steady beat — one sound per beat — and eighth-notes are twice as fast – two sounds in the space of one beat,” Bakeman says.

Your child skips, hops, marches, claps, tiptoes and steps to the beat. She makes creative movements to music, showing her understanding of rhythm, beat and the feeling of the music. She may make up hand movements to go along with songs.

First-graders begin to learn and use the vocabulary of music, such as tempo, melody, echo, solo and beat. They also learn to understand how music communicates feelings. Your child can use words such as happy, sad, excited or scary to describe the emotions portrayed in music.

In a rich music program, first-graders develop recognition of musical notation. They learn to read and write simple rhythm patterns.

What to Look for When You Visit