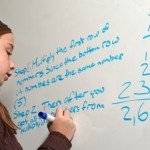 Your fourth grader and math under Common Core Standards

From decimals and tougher fractions to measuring angles, fourth graders work on complex math concepts that can stump the rusty skills of their parents.

What’s great about fourth grade math is that it’s perfect for games. Help your child clock his speed on his skateboard. Bake two pies and do some imaginary slicing and dicing to help your child work on finding equivalent fractions or subtracting fractions with different denominators (the bottom number). Making math fun really will help your child in the long run.

Here are the 12 math skills your child should learn by the end of fourth grade:

We need to operate

Fourth graders are skilled enough to solve multi-step word problems using any of the four operations – addition, subtraction, multiplication, and division — with equations.

For example: Kayley has 272 beads. She buys 38 more beads. She will use 85 beads to make bracelets and the rest to make necklaces. She needs 9 beads for each necklace. How many necklaces can Kayley make?

Your child will learn how to find factor pairs for whole numbers up to 100. These are two numbers that, when multiplied, equal the original whole number.

One in a million

Fourth graders learn to read, write, and understand place value up to 1,000,000. Starting with the ones, every place to the left is 10 times greater.

With this understanding of place value, your child will start working with larger numbers, including adding and subtracting whole numbers up to 1,000,000, multiplying two two-digit numbers, and multiplying a four-digit number by a one-digit number.

Fourth graders gain a deeper understanding of fractions. They add and subtract fractions with the same denominator (the bottom number).

They also add and subtract mixed numbers with the same denominator.

Students also learn to multiply fractions by whole numbers and understand why the product (the answer) is less than the whole number.

Your child will solve word problems that require adding, subtracting, or multiplying whole numbers by fractions.

Fourth graders also learn how to convert fractions with denominators of 10 or 100 into decimals and show them on a number line.

How long is that iguana in your bathtub? One yard? Three feet? 36 inches? Yes, yes, and yes: it’s all of the above. Fourth graders learn the relationship between different units of measurement within each system. In the U.S., 12 inches equals one foot and three feet equals one yard. In the metric system, which is based on 10, it takes 10 millimeters to equal one centimeter and 100 centimeters equal one meter.

In the fourth grade your child will use addition, subtraction, multiplication, and division to solve world problems involving time, distance, volume, mass, and money. The questions will often include fractions and decimals and require students to illustrate the problem on a diagram or number line.

For example: Sarah is driving 60 miles per hour to St. Louis, 100 miles away. How many minutes will it take to get there? How many hours?

Where did that side go?

Fourth graders learn to solve real-world problems to determine the perimeter or area of a shape, even if the length of one side is unknown. They’ll apply addition, subtraction, multiplication, and division to the formulas for area and perimeter.

For example: Area = length x width
Perimeter = the sum of the length of all sides.

Your fourth grader will learn a few more properties used to classify shapes, such as whether a shape has perpendicular or parallel lines. Kids also work with the angles in shapes. You can expect your child to use a protractor to measure angles, spot a right angle when she sees one, and know that the sum of the angles in a triangle is always 180 degrees, and in a rectangle, it’s always 360 degrees.

True, there are some more advanced concepts in here. If your child’s math homework strikes you as a bit tougher than what you remember, take heart. Keep your attitude toward math positive and try to have some fun helping your child with math this year.

See what fourth graders working at grade level with fractions looks like in our Milestones videos: