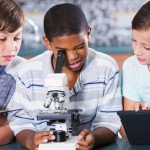 Your fourth grader and science

Fourth graders study electrical circuits as well as the properties of conductors and insulators.

What science topics will my fourth grader learn?

Fourth graders develop their science studies with an overview of the life, earth, and physical sciences. What’s more, kids in fourth grade conduct hands-on science investigations that should ignite their curiosity. They’ll learn what professional scientists do and begin to better understand the concepts in their studies. Some classrooms take field trips to points of scientific interest — a watershed, an observatory, a farm — to extend lessons beyond the classroom.

Life science is the study of the structure and behavior of living organisms. Students of life science start by learning to classify plants and animals according to their characteristics. For example, they might compare animals with backbones (vertebrates, like giraffes and hippos) to those without (invertebrates, like snails and slugs), and they’ll learn to classify characteristics as either inherited or learned (eye color is inherited, riding a bike, learned).

Fourth graders also study the life cycles of animals and plants, observing plants in the classroom and making a life cycle chart or a flip-book to map the cycle’s stages. Fourth-grade life science lessons also include a unit on the life cycles of animals and plants. Your student might observe the life cycle of a plant in the classroom, and then make a life-cycle wheel or flip-book to demonstrate their understanding of each stage in the life cycle. Students also learn about different environments — deserts, rain forests, and wetlands — the different organisms that live in each one and how they adapt to their environment.

In earth science, students acquire facts about the earth and its solar system — like why the sun produces light, and how the moon reflects light from the sun. By observing the moon’s phases and constellations, fourth graders should be able to visualize the relative position of the earth and the planets. They should be able to name the planets in the solar system and the characteristics of each.

Fourth graders should receive an introduction to weather. They learn to classify clouds by type and begin to understand how they’re formed. Fourth graders also record weather patterns, using tools that include thermometers and weather vanes.

Fourth graders explore physical science in a number of ways. By studying magnetism and static electricity, kids gain insights into electrically charged objects. They’ll also learn about electrical circuits, including how to distinguish between different types of circuits. They might construct a circuit and use it to test whether objects are conductors — materials like copper, which allow electricity to flow through them — or insulators, like wood, which inhibit electrical currents.

Physical science also incorporates lessons about light. To explore the characteristics of light, some fourth-grade teachers might ask students to conduct experiments using a light source and mirror, and then investigate the way that light travels.

Learning what scientists do

Students in fourth grade are well on their way toward conducting scientific experiments and investigations. They’ll probably get more than a few opportunities to practice their new science process skills, also called investigation or inquiry skills.

“In fourth grade, the idea of using evidence and logical thinking to support their conclusions is possible for many students,” says Fred Stein, our science curriculum consultant.

According to the National Science Education Standards, students should be encouraged to:

Children may be required to take a state-level science test at the end of fourth grade. To see if your state releases its test questions, search your state department of education’s website.