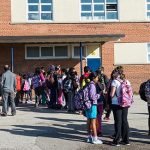 Advertisement
Parenting » School life » How one mom helped get others involved

How one mom helped get others involved

When Tanyit Arellanos’ daughter Elizabeth started sixth grade at James Lick Middle School in 2005, Arellanos noticed two problems right away. First, students arrived at school early in the morning and would hang around unsupervised waiting for school to start. There were often scuffles between students during this time, and it did not feel like a safe environment to Arellanos. Second, although more than 60 percent of the students at the school were Latino, the Latino parents were not involved in the school. When Arellanos attended the first PTA meeting of the year, no other Latino parents showed up.

Arellanos, a childcare provider, began coming to school with her daughter early each morning to help supervise the students.

She put on a name tag that said “Parent Volunteer” and mingled with the students. At the same time, she talked with other Latino parents she met at the school and tried to recruit them to help her with supervision. “I’m very friendly and I say hi to everyone,” she said. “I would just ask them, ‘Can you help me? Can you help for even 15 or 20 minutes? Don’t be afraid’!” There were four parents she frequently saw watching the kids from the window. She asked them to help, and they said no, so she kept on asking until they said yes. Arellanos eventually recruited 12 other parents to help supervise kids in the morning. Some stand near the front door; others supervise the yard or the cafeteria.

The parent liaison at James Lick noted that as these parents began to help at the school, they became more involved in other ways, too. They started attending meetings and working in the cafeteria, and they are now a presence at the school. Arellanos also joined a larger effort at her school to get Latino parents involved. Another parent, Daisy Hernandez, was working with the San Francisco Chapter of Parents for Public Schools to start a club for Latino parents. The club is intended to increase communication between parents and provide a way parents can help each other navigate the school. Parents who speak both Spanish and English can translate flyers sent home in English, help make phone calls and attend meetings with Spanish-speaking parents.

Arellanos supported the idea of the club and believes that getting parents together to talk informally will also help them overcome their fears of being involved at school. At club meetings parents can tell each other about school experiences so they seem less threatening. Arellanos was instrumental in recruiting parents to come to the club’s first meeting. She told everyone she could about the meeting, calling some parents on the phone and telling others about it when they dropped their kids off for school. Fifty parents showed up for the first meeting.

Getting other parents involved

Arellanos believes many parents are intimidated by school because they do not speak English well or they did not get much schooling themselves. When she was recruiting parents for yard duty help, she was persistent in asking for help and she emphasized to parents how important it was to be involved with their kids. The new Latino parent club at James Lick makes it easier for parents to be involved in the school because they have the support and help of other parents.

Working with the school

The biggest challenge was helping the parents overcome their hesitation to become involved in the school. The keys to Arellanos’ success were persistence and a focus on the importance of parents being involved with their children. She was not afraid to ask parents to help, and then ask again and again. She also never stopped stressing to parents the importance of supporting their children both at school and home. “If you are here [at school], you have power in the school. You can help your kids. That is the right thing for your kids.”

How the school has benefited

Arellanos’ efforts have made James Lick a safer place for students in the morning now that there are plenty of adults to keep an eye on them. She has also contributed to making the school a more welcoming place for Latino parents and helping them become a very important part of the school.

Arellanos urges parents to not be afraid to be involved in their kids’ schools and reminds them that being involved helps children both academically and socially. Arellanos’ own daughter was not happy when her mother first became a strong presence at the school, but she now understands why and recently told her mom thanks.