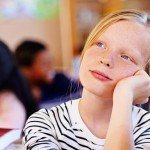 Growing up gifted with ADHD

Being bright and creative — but having a mind that wanders and words that elude you — create special challenges. One young girl describes her experience.

I’m 12 years old and for as long as I can remember, I’ve had opposite sides to myself. I’m told that I’m “gifted” — very smart and creative. But I also have to work really, really hard at things that seem much easier for other kids, like memorizing and paying attention.

Here’s an example: In math and science and in art, I’m quicker at figuring things out than other kids. Like when my teacher tells us a new way to subtract fractions, it seems obvious to me and not to other kids. But when I’m trying to listen to someone talking or lecturing, my mind starts to wander.

When my mind wanders

It feels like branches on a tree; pretty soon I don’t know what the discussion is about any more. Sometimes this is good when I’m talking to someone because it helps me branch out in our conversation. If I’m in class, it helps me bring up new ideas that no one else has thought of. But it also hurts me in class because I don’t always fully get what the teacher is saying.

When I’m doing something that’s hard for me, like writing, I drift off easily. I end up doing a quick job so I can do something else — something I’m better at. But then I don’t get a very good grade on my essay, and I feel bad. The problem is there are so many interesting things to do in my house; things that I think are just as educational as writing. I’d rather do chemistry and cooking experiments in the kitchen, or try out new kinds of seeds or soil mixtures in my garden, or watch the Discovery or History channel or Popular Mechanics for Kids, or solve logic puzzles and games. I’d rather study bird behavior (with my birds, of course!), work on my website with my dad, read stuff I want to read, and engineer new contraptions with string or wood or whatever else is lying around. I love my school, but I hate that homework takes time away from doing these things.

Expressing my thought and feelings

Sometimes I have complicated ideas that I can’t explain to others. That really frustrates me, and I get upset with the person for not getting it. I guess you could say I cry pretty easily, and sometimes I overreact and start crying. This really bugs my mom. Sometimes I have the same sort of problem when I need to ask a question. I get stuck on a question because I can’t formulate it. And I have the same problems when I’m trying to write down my ideas for a paper.

Japanese has been easier for me to learn because when you write in Japan, writing is an art, and I love to draw. A word can be totally different if, say, two lines are touching than if they’re not. Writing in Japanese is full of precision, and I like taking a long, long time on something and making it exact. But, slowness is another problem I have that frustrates other people. And my tutor says that I sometimes have a hard time deciding when getting into details makes my work better or when it actually hurts my work because “I can’t see the forest for the trees.” There IS one part of Japanese that has been very hard for me. I’m way behind the rest of my class on memorizing Japanese characters and character blends.

That’s what it’s like to be gifted and have attention deficit hyperactivity disorder (ADHD).

I’ve tried medicine to help me with attention. I couldn’t believe there was such a thing when my mom told me about it. It’s so weird that they make a medicine for that! Ritalin helped me concentrate and be more energetic about school. Adderall helps in a different way because it makes me more optimistic, but when it wears off I feel less cheerful and have shorter attention and drift more. Sometimes I have trouble remembering to take it in the afternoon. One thing about the Adderall is that it helps some, but it doesn’t completely solve the problem of attention. I still have to work at paying attention, and sometimes I still drift off even with the medicine. [Since this story was written, long-acting medications for ADHD have been developed; they deliver results throughout the day without the need for additional doses. —- Editor]

Medicine doesn’t help the problems I have memorizing and studying for tests. My tutor suggested that I draw pictures when I’m memorizing facts for my history test. For example, when we were studying the Renaissance, I drew a picture of a harp for the rebirth of music, and numbers for rediscovering science, and a cross for the rebirth of culture. That helped me remember those things for an exam. But the problem is that it takes too long to study like that, so I wasn’t able to study everything and I got a bad grade because there were lots of parts that I didn’t get to. Sometimes it makes me sad and it makes me want to give up when I realize how much harder I have to work at things that are not that hard for other kids.

Settling into the right school

In third grade I went to a special school for kids with learning disabilities where we learned the Slingerland method for reading. That was really good for me. Now I read books that are really hard, like The Golden Compass and The Amber Spyglass, my favorite book series. Visualization-verbalization was really helpful, too, for figuring out spelling. I’m still a bad speller, but I’m better than I was. But the other parts of school were too easy for me, and I got bored because I already knew the science and stuff. When I returned to my public school, kids asked me, “Dana, did you go to a special ed. school in third grade?” Special education is not a popular thing. You have to be normal to be cool.

Some people idealize gifted students because they think they’re good in every subject, but that’s not true. We’re not super smart in everything, like a computer. I’m gifted in certain ways. My tutor told me that I’m a visual learner. For example, in history when my teacher was telling us about World War II, she showed us pictures of the ditches that they fought in and the barbed wire. I’ve always remembered that scene. History is also more interesting to me when there are pictures along with words.

Being gifted is a bad thing at some of the schools I’ve been to. In movies, really smart kids aren’t usually fit and good at sports. People think if you’re super smart, then you’re probably weak. It’s pretty cool to be a whiz at math, but it’s a lot cooler if you’re really athletic. That’s what I found at my old public school. Maybe the other kids are jealous if you’re smart. But if you get treated like that when you’re smart, I don’t know what they’re jealous of.

Now I go to a school for gifted kids, and we’re plenty athletic there. We do movement and dance and martial arts almost every day. I’m glad that the kids at my school aren’t as much into style and how cool your clothes are. It’s a lot more comfortable for me that way.

What’s the best way to help kids like me? We need lots of parent support and not to be yelled at for getting bad grades. The best thing parents can do is help their kids overcome their difficulties. It’s helped me when my mom keeps me on task and shows me new ways of studying for a test. It’s helped me to find friends that are honest and don’t talk behind my back. It’s helped to find a school where kids don’t always worry about being cool and where the teachers see that I do have things I’m very good at. Once my mom told me a story about computer nerds who ended up taking over the world, and sometimes I think of that story and it makes me feel better.

I hope other kids who are gifted and have ADHD know they’re not alone. I’m sure there are lots of kids who share the same feelings and frustrations. I hope what I’ve written helps kids talk to their parents and teachers about things that bother or worry them and makes them feel less weird and alone. Talking about what things you’re good at and what things are hard for you — and why they’re hard for you — can help kids start to figure out how to make school a little easier. Most of all, talking about these things can also help kids feel better about themselves.

© 2008 GreatSchools Inc. All Rights Reserved. Originally created by Schwab Learning, formerly a program of the Charles and Helen Schwab Foundation.