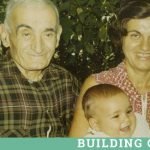 When your family history includes tragedy or difficult, even unspeakable hardship, sharing those moments with your child can connect them to their own resilience.

My mother was dicing the carrots and peeling the potatoes as she talked, her voice full of excitement. I was about 6 years old and already knew the story well. “Your grandfather was a hero,” she said. “He crossed the desert as the Turks tried to kill him. Every time they tried to catch him, he outsmarted them.”

I nodded approvingly. Yes, my own grandfather had crossed barren tracts of land and outwitted the bad guys, in a plotline ripped straight from one of my cartoons. I always felt a sense of pride during the telling of this tale until she added this last bit: “He was so thirsty, he drank his own urine.”

Why would anyone do that? I wondered. At that age, I couldn’t fathom circumstances that would drive someone to such extremes. It just seemed like a gross-out story told on the schoolyard and made me feel shame.

My mother was only repeating what her father, Stepan, did — and that was to tell this story. During her own childhood, her father would regularly take her back to the last days of the Ottoman Empire, when the government deported the majority of the 2 million Armenians, driving more than half of them to their deaths. Sentence by sentence, she’d memorized almost every detail of his life’s upturn, as he slid from a successful entrepreneur to a beggar on a death march, alongside other ethnic Armenians. One of the few people who survived the Ottoman Empire government’s systematic extermination of an estimated 1.5 million Armenians during World War I, my grandfather never stopped sharing his story: how he had outmaneuvered police, donned disguises, and when he least expected it, experienced the kindness of strangers, as his community died around him.

His recently discovered notebooks became the basis for my book, The Hundred-Year Walk: An Armenian Odyssey. Using his words and additional research to reconstruct his experience, I retraced his death march across present-day Turkey and Syria. But the kernel of the book began long ago, in the kitchen, when my mother told me about my grandfather’s desperate struggle to survive.

Many parents face a similar decision as my mother, only with different narratives: Should we pass down stories from our families when those stories are exceedingly painful? Or is it better to shield children from such horrific facts? Is there a right time to broach conversations about war, torture, violence, addiction? Recent research shows that educating children about their family history can be beneficial to their development. Knowing one’s family history is associated with a higher self-esteem and resilience. But for families that harbor dark chapters (And what family doesn’t?), it’s not easy to know when and how to share these stories.

“In almost every family, there’s a family secret,” said Marshall P. Duke, professor of Psychology at Emory University. “Those are typically embarrassing. What we found in the family histories of the kids who seem more resilient, they had knowledge of things that were not so good.”

Though kids seem to benefit from knowing even the darker tales from their family history, psychologists stress that parents need to take care about how they tell the story. Duke and his colleagues found that the most beneficial family histories oscillate from good times to bad times and back again. These narratives are most reflective of life, he said, unlike ones scrubbed clean of adversities. This way, children can grow up learning that they can move past the inevitable challenges that arise. “When you’re informed that your heritage was associated with bravery, perseverance, or overcoming adversity, it says, ‘Hey it’s in my blood.’” said Charles R. Figley, distinguished chair in mental health at Tulane University. Understanding the heroic actions of one’s family members seems to help children identify with resilience, which in turn makes them more resilient.

So what’s the best way to tell these stories? How does one inform and empower, particularly when it’s a painful history of genocide, slavery, or war? A lot has changed since the early days of teaching children about the Holocaust. In past generations, fourth graders watched graphic documentaries, like the 1955 French Night and Fog, with little explanation. It was a viewing that scarred some into adulthood. Grainy black-and-white stills and video showed terrified villagers in cattle cars, camps full of the skeletal, and the pyres of the dead. Research shows that children do not learn when stressed. “If you’re crying, you’re not learning,” explained Karen Shawn, visiting Associate Professor at Yeshiva University and editor of Prism, a journal for Holocaust educators. “Because your emotions are trying to protect yourself.”

Parents should first ask themselves what their motivation is, particularly when the child is very young. “If you’re living with a Jewish grandmother, and she screams at night, then there’s a reason to tell because the child needs to learn,” Shawn said. “Outside of that, no one has yet been able to express the need for a child to know that horror exists in the world. If there’s no need to tell the child, why tell the child? … Otherwise, it’s your need to tell, not their need to learn.”

Many times, the story can wait until the child is older. But if there’s an excruciating story that absolutely needs to be shared with your child, then begin by seeking the guidance of a therapist or psychologist. Plan the story so you can stop if your child doesn’t seem to be handling the information. And, as always, monitor the situation as you go. “The bigger the story, the bigger the impact, [and] the more planning should go into this,” advised Figley. “Because if you can pull it off, it’s a gift.”

Eugenie Mukeshimana, a survivor of the 1994 Genocide Against the Tutsi, never had that sit-down conversation with her daughter. She didn’t have to. For the five years following the slaughter’s end in Rwanda, she and her daughter buried the remains of friends and family members once they were found. Mukeshimana’s husband had been killed without ever meeting their baby girl, and Mukeshimana barely survived the slaughter herself. “Every weekend, I went to those burials and I took her with me. I didn’t think twice that she shouldn’t be seeing this. Her childhood memories are of the genocide.” By the time her daughter was 8, she knew more than Mukeshimana anticipated. When the U.S. was going to war with Iraq, the then-8-year-old penned a letter to then-President George W. Bush. “In her broken English, she sent a letter to Washington to protest the war,” recounted Mukeshimana who is the founder of Genocide Survivors Support Network, a nonprofit dedicated to genocide prevention and advocacy. “In that letter, one of the lines was ‘war kills because the war killed my dad, I don’t want you to go to war.’” Now 22 years old, her daughter has become a vocal activist in her own right, speaking out about injustices, particularly matters of race. What seemed impossible for her to absorb as a child has helped her strength as an adult.

Unlike Mukeshimana’s daughter, I wasn’t living in a place where we had to bury our loved ones’ bones. Certain details of my grandfather’s story, like the urine-drinking, could have waited until I was older. But my mother did present him as a hero and glossed over the true horrors until I was older. Educators and psychologists say it’s all about age appropriateness, and every child is different. “Just because they are asking about the past doesn’t mean at a very young age they need to hear all the details,” one advised.

Though there is no perfect age for broaching the horrors of living through the Holocaust or the latest suicide bombing, many experts recommend the middle school years. Nonprofit educational group Facing History and Ourselves targets eighth graders in their genocide-related curricula. There are many reasons for this. At that age, adolescents begin to think abstractly and can hold two contradictory thoughts. Personal testimonies can also be placed within the context of history. “If you start to think about who adolescents are, they’re starting to think about their own issues about groups, power, and responsibility,” explained Adam Strom, director of scholarship and innovation for Facing History and Ourselves. “They’re able to make connections between past and present; and they can, when pushed, make distinctions.”

In the end, it comes down to an individual philosophy of parenting. Since children all mature differently, there’s not one best way. Yeshiva’s Shawn recommends that parents stick with the style of parenting that suits them best and apply that across the board.

Looking back, I’m so grateful my mother shared her father’s story with me. I grew up believing that, somehow, I had inherited this courageous man’s superhero powers. He had truly triumphed over whatever came his way: crossing a desert for six days with only two cups worth of water, summoning incredible inner strength, and miraculously talking his way out of summary execution by empathizing with the gendarmes who were about to kill him. He continues to inspire me, despite my living a century later so far from the killing fields of his youth. By passing on my grandfather’s story to me, my mother also did the most important thing: she ensured that his eyewitness account of history would live on for future generations. Without these stories, our children not only lose connection to their own families, but to the very fabric of history.