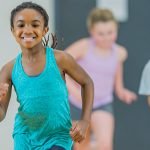 Kids' physical fitness has been definitively tied to improved academic achievement — and some schools are starting to take notice.

Middle school students at Kaleidoscope Academy, a district charter school in Appleton, WI, are constantly moving. Everyone has a physical education class, called “phy-ed” here, at least twice a week. On top of that, there’s a daily lunch break that comes with time for kids to get outside and move around. Students can also choose from two additional exercise-focused electives — dance and personal fitness — which for some students can mean a 40-minute exercise period every day.

And the action doesn’t stop there. Teachers like Lisa Sackman in the sixth-grade wing offer “brain breaks” every 20 minutes. Teacher Travis Olsen has an exercise bike in the back of his seventh grade science classroom that kids are welcome to use whenever they feel the need. And eighth grade co-teachers Abby Jolma and Toni Giebel let kids sit on wobbly chairs — short stools with a curved base — yoga balls, or traditional chairs while they learn math and science.

“They need it,” Giebel says of the bouncing and fidgeting she now observes constantly during classes. “They need it so bad.”

Giebel says it’s clear to her that students concentrate better than they did three years ago when there were far fewer options for physical activity at school. But the kids themselves “don’t notice it,” she adds. Indeed, students are mostly unimpressed with how much movement they get in their day.

During a group science lab in Giebel and Jolma’s class, Anna Wang, 13, sat on one of the wobbly chairs the school purchased for classrooms this year. “It was the only option,” Anna, 13, says with a shrug as she rocks back and forth on the chair, adding that she doesn’t think the seating makes any difference.

Despite her stated disinterest, the level of physical activity Anna and her classmates experience during their school day is unusual and probably beneficial. In the U.S., where 31 percent of children between the ages of 10 and 17 are obese, most school children move far too little, experts say. Thirty years of focus on increasing academic minutes in the school day has resulted in reduced recess and physical education time at many schools. The lack of physical activity is taking a toll on student fitness and that’s bad for growing brains, research shows.

But now a growing number of politicians and educators, like those in Appleton, have begun to heed the research and decided that to improve academic performance, they must do something about their students’ physical fitness as well.

As a result of this new attitude, at least 14 state legislatures considered new laws in 2016 that would increase the amount of physical education or recess schools are required to offer or raise the bar for qualifications for physical education teachers, according to a 2016 report by the Society for Health and Physical Educators (SHAPE). Some even took action. Florida and Rhode Island now mandate 20 minutes of recess time a day for elementary school students.

Charles Hillman, a kinesiology professor at Northeastern University in Boston who studies the connection between the body and the brain, says there’s strong evidence that supports making physical education and recess a priority in schools.

“The goal is to get kids moving throughout the school day,” Hillman says. While he grants that academic class time is also important, “clearly the academic at this point is at the cost of being physically active, and I think there has to be some level of accommodation.”

Hillman also cautions that physical activity alone has not been shown to increase cognitive performance. A slow walk, for example, does little to make anyone smarter. What is definitely tied to brain health, Hillman says, is physical fitness.

The prefrontal cortex and the hippocampus of physically fit children are better developed than those of less fit children, Hillman says. These two brain structures control many of the abilities that lead to high academic achievement: long-term memory, self-regulation, and goal making, among other key functions.

Hillman, who is advising the U.S. Department of Health and Human Services on the latest exercise research for the 2018 revision of the department’s recommendations for physical fitness, says that evidence of a connection between fitness and brain function has mounted steadily over the years.

A 2009 Stanford University study found that fifth, seventh, and ninth grade students in California who passed the state physical fitness test and those whose fitness improved between fifth and seventh grade scored better than their less-fit peers on the state’s standardized tests. A 2013 study of nearly 12,000 Nebraska students also found that aerobically fit students were more likely to pass the state’s standardized math and reading tests, regardless of their weight or socioeconomic status. Another 2013 study that randomly assigned 8- and 9-year-old Illinois children to a nine-month after-school fitness program found that the kids whose fitness improved also got better at paying attention and ignoring distractions. They also improved to young-adult levels in their ability to regulate their behavior.

School districts that have added more physical activity to their daily schedules in the hope of improving academic performance have also seen measurable changes. When a Ft. Worth, TX school made a much-publicized switch for its kindergarten and first grade students from one 20-minute recess a day to four 15-minute recesses — or an hour, total — it found that students were more focused in class and that teachers were able to move through curricular material faster. Off-task behaviors in class decreased by 25 to 35 percent and students’ body mass indexes (weight divided by height) stabilized or decreased, says Deborah Rhea, a professor at Texas Christian University and the lead researcher on the longer-recess initiative.

“We’re at least getting closer to a healthy environment that’s conducive to learning for teachers and for kids,” Rhea says of the multiple 15-minute breaks.

All of this research comes after nearly three decades of school policies that decreased recess time amidst fears that the unstructured time led to student fights or took time away from students’ focus on passing standardized tests. One 2007 survey by George Washington University found that 20 percent of a representative sample of districts had decreased recess time by an average of 50 minutes a week and 9 percent had reduced physical education time by an average of 40 minutes.

The idea that young children need to move a lot is fairly intuitive to anyone who has ever spent time in the company of a child under age eight. But older children need movement, too — at least an hour a day according to federal guidelines — and they are getting a lot less of it. Fewer than one in three high school students — 27 percent in 2015 — are getting the recommended number of minutes of daily exercise, according to data from Child Trends, a nonprofit research organization focused on youth issues. Girls, black students, and Hispanic students get less exercise than white boys.

Moreover, budgets for physical education equipment and supplies are tiny; the median is just $764 per year per school, according to SHAPE’s 2016 report.

Many blame the federal education law known as No Child Left Behind (NCLB), which was enacted under former President George W. Bush, for the dearth of physical education funds and focus. “There was no phys ed in NCLB,” Wright says. “Teachers were cut, budgets were cut, some states repealed state policies on phys ed. There were definitely some pretty serious unintended consequences.”

Several factors seem to be leading educators and policymakers to begin addressing those consequences: the current backlash against standardized testing, the ever-improving understanding of brain science, and the influence of national campaigns like former First Lady Michelle Obama’s Let’s Move! and SHAPE’s efforts to influence national legislation, such as ESSA.

In Wisconsin, for example, the state education department oversees a program called Core 4+, which features inexpensive interventions to increase movement throughout the school day. The program is now in place at 450 schools serving over 300,000 students. Appleton, which has seen several of its schools receive national recognition for their efforts in this area, is one of the cities participating in Core 4+, better known by school leaders there as “active kids, active classrooms.”

The idea of adding so many minutes of movement to the day, especially during class, was initially met with some resistance, says Mikki Duran, who oversees Appleton’s physical education department. Teachers told her they didn’t have time. Duran’s answer was that taking time to move would actually result in more focused time to learn. Once they tried it, she says, most teachers became quick converts.

Today, every school in Appleton has its own program, each aimed at increasing physical activity and fitness. At Horizons Elementary, at least 40 of the school’s 350 kids start every day in the school gym playing a game like “Castle” — a kind of dodge ball, capture-the-flag mash-up. The gym stays open all day for teachers or aides wanting to bring kids down to run a lap and burn off some excess energy. There’s also a running club, and the teachers themselves often start staff meetings with a few laps around the school track.

“Kids are more alert, more involved” after the breaks, says fifth grade teacher Gina Dresang, a 23-year veteran. “It can be tricky. Once they get up, they can get silly and it takes time to get them back on task, but the benefits outweigh the downsides.”

For several educators in Appleton, the pursuit of better fitness has also become personal. After learning more about the effects of physical fitness on the brain a few years ago, Kaleidoscope principal Al Brant decided he needed to make a change. Heavy-set all his life, he opted for gastric bypass surgery, improved his diet, and started exercising. He lost 120 pounds and spent part of last summer on a trip with his daughter to climb 19,300 feet to the top of Mt. Kilimanjaro. The photos of his trek decorate his office walls along with pictures of his bow-hunting expeditions.

“It changed my attitude about promoting phy-ed,” Brant says of his experience.

Now, he wants his students to know about personal fitness long before they become overweight adults. He has prioritized movement at his school, offering strong support to the physical education teachers. Staff meetings are now regularly interrupted as teachers get up and move for a few seconds or minutes, just like the “brain breaks” offered in most classrooms. Brant has also fully bought-in to the idea of movement during class. Last spring, he authorized the $9,072 purchase of 144 wobbly chairs — the ones the kids appear to love even as they insist they don’t.

The change in students’ ability to focus, especially in the kids who struggle with attention deficit disorder, has been noticeable, he says. He advises other principals thinking of making a shift at their schools to find a few adult champions who can help explain the brain science and offer practical advice to other teachers on how to make movement a bigger part of the day. He also says it’s worth having physical education options with clear curricula and learning standards. The more kids understand about what they can do to be fit now, the more likely they’ll be able to stay fit as adults.

Indeed, says Wright, the national advocate from SHAPE, the biggest payoff of more physical education and recess for America’s schoolchildren would be fitter adults.

“Students who are physically active and healthy have higher test scores, lower rates of discipline referrals, and increased focus in the classroom,” she says. And while that’s important, Wright also emphasized the health and wellness value of high-quality physical education: It teaches kids “how to be physically active for a lifetime.”

This article originally appeared on The Hechinger Report.