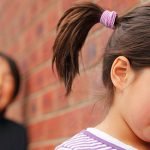 Teaching children to speak to an adult about bullying is one of many suggestions from our readers on how to deal with a bully.