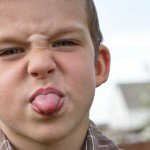 Advertisement
Parenting » Emotional smarts » How to not raise a jerk

How to not raise a jerk

With little eyes watching and learning from your every move, what behavior should parents reconsider to set a better example?

What do you think of people who take candy from children? Or who don’t stop (or even slow) for pedestrians? Or who tend to boss others around rather than communicate more cooperatively?

Collectively, I think we frown on these “bad” behaviors. They’re not deadly sins, but they’re undesirable, icky, and generally what we’re trying to teach kids not to do.

But as role models, parents may be unconsciously modeling some of these behaviors — and according to research out of University of California, Berkeley, it may depend greatly on your relative position in our rapidly diverging rift between the haves and the have nots.

Social psychologist Paul Piff, along with other researchers at Cal, conducted a series of studies about people’s everyday behaviors. A PBS NewsHour report, highlights a variety of Piff and his colleagues’ findings that indicate people who feel affluent tend to act less charitable and, in some cases, are just plain bossy and self-centered. These studies showcase our daily little behaviors — the kind our kids see and mimic. No one calls these teachable moments. But now we may reconsider.

In one study, 90 percent of drivers stopped for pedestrians in a crosswalk. But people driving luxury cars were three to four times more likely to just keep going. Technically, that’s breaking the law. But it also shows a pattern of impatience and placing more value on your own time over others’.

In another study, participants were told the candy dish on the table was filled with treats for kids — but they could have a piece or two if they wanted. Wealthier participants took twice as much candy from the bowl. A funny segment of the video shows a woman quickly stuffing candy in her pocket!

In yet another experiment, people’s honesty was put to the test with a dice game. Participants were to self-report the results of their dice rolls with the possibility of a $50 cash prize. Shockingly, people in the study’s highest income bracket (those earning $150K–$200K a year) were four times more likely to lie about their rolls to collect the prize.

Wait! Before you jump to conclusions about rich people, consider this: it’s the feeling of relative wealth that elicits this behavior. Using the ultimate money-lover’s game, Monopoly, researchers were able to see the wealth-effect transform people’s behavior before their eyes — regardless of actual means. The wealthier Monopoly players started out with more cash, a ritzier playing piece, and established rules rigged in their favor, such as getting more turns and collecting a higher salary each time they pass Go. No matter their economic status in real life, the “rich” game players who start with more cash and get more turns, though they’re “winning” an obviously rigged game, nevertheless start feeling and acting entitled. Snacking during the game, these “winners” slovenly start chewing with their mouths open, conceitedly start acting and speaking a bit more aggressively, and actually feel they deserve to win.

How can this be?

Putting a magnifying glass to these small, seemingly inconsequential routines, researcher Paul Piff says we get “a really incredible insight into what the mind does to make sense of advantage or disadvantage.” In our rich-poor divided world, this matters. For parents trying to raise kind-hearted, socially conscious children, it matters all the more.

Doubling down on discussions of empathy can’t hurt, but as the Monopoly game scenario so aptly shows, it’s crucial to help children experience both the winning and losing sides of this sort of Monopoly game. It can call into question bigger decisions about where to live and where to send our kids to school. For instance, making typically admirable sacrifices to send a child to the best possible school could backfire, creating a top dog who feels entitled — or worse, who doesn’t think the rules apply to her.

In our efforts to protect kids from losing, getting their feelings hurt, or being treated unfairly, are we robbing them of the insight it takes to consider others’ feelings, experiences, and rights, too?

I wonder. A question haunting me since I watched this video: if my own daily interactions were put under a microscope, how would I fare? On my morning coffee run, am I polite, even when I’m late or tired? On my daily commute, am I giving up my seat when I should?

As parents, what do you think? With little eyes watching and learning from your every move, what behaviors should parents reconsider to set a better example?