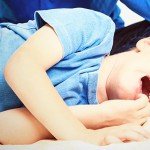 How to stop a tantrum

Learn the best ways to diffuse your child's tantrums (even when your child is wailing, face-down, on the floor).

My son’s epic tantrum happened at a grocery store. He was almost 3, his little brother was still a baby, and all three of us were tired. We stopped at the store on the way home from the park. I knew this was a dangerous move. Balancing a basket of groceries and the sleeping baby in his carrier on one arm and holding my son’s sticky hand with the other, we’d just joined the checkout line when my son gleefully yelled, “Juice!” A dazzling variety of expensive (not to mention sugary) drinks – just at his eye level – caught his attention. I said no. Thus began the great grocery store meltdown. He burst into furious tears and began hitting the cooler door with his fists and screaming. As he collapsed into a noisy heap on the floor, the baby woke up and began howling, too.

Tempest in a toddler

What are these eruptions of uncontrollable feelings in our children?

“Tantrums are your child’s way of saying, ‘I want!” explains pediatrician Laurel Schultz. “‘I want that toy. I want that dirty piece of chocolate that I dropped and you’re refusing to let me eat.’ Children become overwhelmed by their feelings, and the result is a tantrum.”

Schultz says that small children have little control over their lives and have few words to express their desires and disappointments. Tantrums are a normal expression of frustration from children who want their way but don’t have the skills to express themselves yet. Just because they’re normal, however, doesn’t mean they’re fun — or easy to deal with. Here are the best tactics parents and caregivers can use to tame tantrums once they start.

9 tips to deal with tantrums while they’re happening

This is essential and applies to all children, according to Schultz, who says I was right not to buy that expensive juice, no matter how terrible (or embarrassing) my son’s tantrum was. Why? Because if you buy that sugary treat at the grocery store, he’ll learn that pitching a fit is an excellent way to get what he wants, and he’ll do it again next time. If you’ve said no to the new toy, or your child is refusing to go to preschool, do not relent to keep the peace. You may not tame this tantrum, but you’re taming future tantrums before they happen. According to Schultz, “When older kids – 4, 5, and up – have regular tantrums, it’s usually because that behavior has been reinforced by the parent.”

Never berate, shake, or spank your child. It makes things worse, not better, because you’re escalating the situation. Speak to your child kindly, but firmly. For example, “Please use your words,” or “I will talk to you when you stop screaming.” If your child hits or kicks, gently hold his hands or feet and calmly say, “Don’t hit. Don’t kick.” Children are usually frightened by their own powerful emotions and loss of control; if you lose control, too, it will only make matters worse. Staying calm yourself will model the behavior for your child and help him learn to do the same.

When your child has a tantrum, first make sure she can’t hurt herself or anyone else. If she refuses to budge, calmly pick her up and carry her to a safe, quiet place away from any harm and, preferably, out of sight of whatever triggered the tantrum.

4. Show that you understand.

Many tantrums start because of a difference of opinion: your toddler wants something and you don’t want him to have it — whether it’s more time at the park, a treat, or the freedom to do something unsafe. If you simply dismiss your child’s request you’re apt to get into a power struggle. You’re more likely to diffuse the situation if you show your child that you understand how he feels by using soothing statements like, “I know you really want a cookie, honey; I understand,” and, “It makes you feel mad that you cannot pet that doggy, doesn’t it?”

If, however, your child’s all flailing fists and blood-curdling screams, the best move is to wait it out with a minimum of attention, says Michael Potegal, a neuropsychologist at the University of Minnesota Medical Center, who researches tantrums and is a father himself. “Attending to the child reinforces the behavior because the child wants attention, even if it is negative attention,” he says.

6. Create an opportunity to calm down.

As the tantrum subsides, sit quietly with your child until she calms down. If you are in a public place, take her to a quiet corner, outside, or to the car. In many cases, you’ll need to pick your child up and carry her away, and that’s fine.

Some experts say a time out is too punitive; others say it can be a valuable way to hit the reset button. If you try a time out, keep it short, says child psychologist John Duffy. “I recommend a minute for each year, so a 3-year-old should get a three minute time out,” Duffy says. “This is as much as a small child can handle, as much as they will learn from. The point of the time out is not punishment. The message should be: ‘We are going to remove you from the stimulus that is causing this problem. We are going to take a little break.’ The idea isn’t to punish your child but to allow her time and a quiet space to get control of her feelings.”

“The goal is for the child to learn to soothe herself, to get herself under control,” Potegal says. Parents can model being calm and taking deep breaths. When your child has calmed down, reassure her that everything is okay by giving her a cuddle.

Later that day or perhaps even the next day, talk about what happened. The words you use will depend on your child’s age. Keep it short. You can say something like, “Can you think of a way to ask for a treat without screaming?” or “Next time we have to leave the park, would you prefer it if I gave you more warning?” With a younger child, you can suggest some words your child could use; encourage an older child to offer ideas himself. Again, the idea isn’t to shame or punish your child, but to help him develop more constructive ways to deal with challenging feelings and frustrating circumstances.

That day at the grocery store, I had no idea what to do. Luckily, I got on-the-spot help from an expert. I had abandoned my place in line and was standing over my son, ineffectually trying to reason with him while also trying to calm the baby. I was just about to buy the juice when a woman who ran a home daycare in our neighborhood walked by. She gave me a sympathetic look. Noting my helplessness, she said, “Whatever you do, don’t give in now.”

If you’re fortunate enough to see a storm coming, you might be able to stop it in its tracks. Read and memorize these seven tips so you’re ready at any moment!