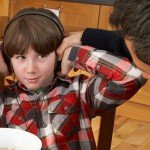 I hate my son’s music!

Should parents have a say in what kind of music their teens listen to? Parenting expert Annie Fox weighs in.

My 15-year-old son listens to music that has objectionable lyrics. I do not feel I am being oversensitive to the music — this stuff is really bad, with a lot of derogatory remarks, cruelty, and expletives that are just plain wrong. Up until last year I was able to censor the music that came into our home. But now that my son is almost 16, he has the ability to download what he wants.

I have told him that I strongly object to the music and feel it is not part of our family values. However he said, “I do not listen to the words, just the music.” I still think that is wrong and a bad influence on him, his 11-year-old sister, and our family. What do I do?

I can appreciate your objection to your son embracing lyrics that you find “really bad.” Even if it’s absolutely true that he doesn’t “listen to the words,” it’s clear that you can hear them and find them offensive.

In case you’re wondering why your son would want to listen to that stuff, part of it is his exploration of identity. In the same way that teens experiment with different hairstyles, clothing styles, piercings, slang, vegetarianism, etc., pop music is a way he’s figuring out “Who am I?” This identity exploration happens in every generation. It’s normal. It’s simply a part of the natural development of an identity that’s separate from one’s parents.

As long as your son’s exploration of identity is of the non-life threatening variety, your best bet is not to turn it into a battlefield. You know it’s not just a rumor that teens are rebellious. The more loudly you object to his music, the more likely he will continue to turn up the volume (pun intended).

You don’t want your objection to his music to turn into a permanent wall between you and your son. The best way I know to encourage teens to get into real trouble is to shut them out by not listening to what they have to say. When you listen to them, that shows you’re treating them with respect, and they respond to that. You can show someone respect even if you don’t agree with them. That’s how civilized people resolve conflicts. Also, when you treat your teen with respect he will treat you with respect (even if he doesn’t agree with you).

I suggest you tell your son that you’re interested in learning more about his music. Ask him to play his favorite song for you. Sit and listen to it with him. (Try to relax your face and try not to judge the lyrics as you listen.) When the song is over, sincerely ask your son what he likes about the song. Then listen to what he has to say. Acknowledge what he has said. Is there anything he pointed out that is valid? Is there anything he mentioned that caused you to think about these lyrics in a new (less condemning) way? After you’ve taken in what he said, then calmly share your thoughts about what you heard. Stay calm and be honest. Here’s what I liked and here’s what I don’t appreciate about the song.

You’re not trying to reach a consensus here, but you are trying to build a bridge. The music is just music. Sure the words may be odious, but they’re not going to turn your son into a monster. If he is, in most respects, a good kid who is mostly making good choices in school and with his friends, then don’t make a big deal about the music. It’s not worth it.

As far as exposing your 11-year-old daughter to these lyrics, I agree with you. You have a responsibility to insulate her from that kind of language and expression. Explain this to your son. He’ll probably agree with you that he doesn’t want his little sister hearing this stuff. Ask him what suggestions he has to make sure she isn’t exposed to these lyrics. Involving him in the process of protecting his little sister will make him feel important and responsible. It will also give him a chance to support some important family values — keeping the little ones from harm.

One last thing, while most teens do their best to show how different they are from their parents, the vast majority of them turn into adults who very much share the values of their parents. So let that be a comfort to you during these teen years — just keep the lines of communication open and show respect for him while you are calmly and clearly reinforcing the values you want him to emulate. If you walk the walk, you’ll have his respect and he will strive to be the kind of person you are. You just have to be loving and patient.

I hope this helps.

Get Annie’s answers to other quandaries:

Should I let my teen daughter wear a thong?

How do you motivate an unmotivated learner?

My daughter is sending sexy pix to guys!

My son used my credit card without my permission

What should I do about my daughter?

My daughter doesn’t fit in and gets excluded