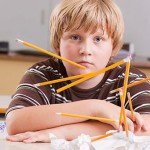 Discipline and the IEP: the rules may not be what you think

Tara Kennedy-Kline’s 10-year-old son was recently diagnosed with Asperger’s syndrome and given an IEP. The diagnosis came after years of “behavior issues” in the classroom, particularly when it came to transitions or his insistence on things staying exactly the same every day (if a child sat in the “wrong” spot, for instance, her son would act out).

In first grade he was put on a student support program for his behavioral issues, he was working with an OT assigned by the school district, he was in a special program with the guidance counselor and his parents went to quarterly “learning intervention team” meetings with the school psychologist, principal and other support staff.

“Even so, Alex served several in school suspensions for behaviors directly related to his “issues”. He was also threatened with being held back because his grades were so poor due to refusal to cooperate in class. (his IQ is above 140),” said Kennedy-Kline.

“Everyday, literally every day it was something,” she said. This year they had him transferred to a school with an autism support program. During the first week in the new school, he was shocked to find that kids “get recess here.” What his parents didn’t know was that for an entire school year, he had been denied recess so often that he thought recess stopped in third grade.

“People would tell me that if he had an IEP, he’d have protection from punishment, but I didn’t know what his rights were,” said Kennedy-Kline.

The confusion about discipline and special education goes back more than a decade.

Back in 2001 when the Senate was debating the reauthorization of the Individuals with Disabilities Education Act (IDEA), the issue of discipline and special education was a hot topic.

The law does protect students from being punished for behaviors that are related to their disability (a student with Turette’s who swears in class, for instance), but it doesn’t mean that special education students get a pass on all discipline.

If a child on an IEP is removed from school for more than 10 days, the law requires that the school have to have a meeting of the child’s team to decide if the behavior is part of the disability.

If a child has an emotional disability, for instance, and has goals in his IEP that call for learning to control anger, and gets into several fights at school, the IEP team has to meet to decide if that behavior is part of the disability. In this case, it’s clearly related to the disability, and the student could not be removed for more than 10 days.

Take the same situation, but the child on the IEP has dyslexia and has no behavior issues associated with it. The team may decide that the behavior was not related to the disability and he could be suspended.

The purpose of the law, says Steedman, is to protect kids on IEPs from losing access to the curriculum. Even if a student is suspended, the school is obligated to continue to implement the IEP and work on the goals.

Even if your child is not on an IEP, but is in the process of being evaluated for special education, they have the same protections as if they were on an IEP, Steedman adds. If the parents or teacher has put in writing their concerns about a child’s learning issues, or if the child is on a 504 plan (through the ADA), they are protected from being removed from school for more than 10 days (if the behavior is a manifestation of their disability).

For bigger issues, kids in special education may face placement in a different setting for as long as 45 days. For students caught with drugs, or who bring weapons to school, or who cause bodily harm to others, the 45-day suspension kicks in.

Where schools and parents often clash, says Steedman, is on the question of whether the behavior is a manifestation of the disability. If the school is recommending that their child be suspended for a long time (a full semester, for example), Steedman recommends that parents file for due process and ask for new evaluations to see if the behavior is a part of the disability.

“It’s confusing to a lot of people,” he says. “But it’s the manifestation determination that is key.”

In his new school, Kennedy-Kline’s son is back to getting straight A’s and has had no suspensions — in school or otherwise for months.