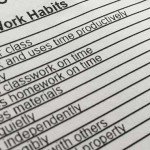 Advertisement
Parenting » Education trends, School life » The incredible true story of the first grader with 40 grades on his report card

We did a double-take at the dizzying number of grades on our 6-year-old's report card — and then we saw the three oddball scales they're using and really got confused.

This piece was originally published in Dave Powell’s weekly blog, K-12 Contrarian, on Education Week. Read his follow-up post Just When You Thought It Was Safe to Look at Another Report Card: Here Comes One From PreK.

Today was report card day for our first grader. The most difficult thing about reviewing his report card with him was talking him down from his belief that everything is cool and he doesn’t need to improve on anything. “It’s really easy to slip into mediocrity,” I reminded him, somewhat sternly, over dinner. “There are starving kids in China who would love to have your mashed potatoes and peas, and would also love to have your job twenty years from now. If you want to be college and career ready you’d better get cracking.” He sighed and picked up an iPad.

But seriously — what do these “grades” even mean? And are they really necessary? We have actually been pretty impressed by our son’s performance so far. I wrote in my very first post about the anxiety that he was feeling when the year began, but now that he’s settled in he seems to be doing very well. And I guess his report card shows that. But I’m really only guessing, because it’s so hard to tell. In our district, students get “effort” grades of “excellent” (E), “good” (G), “satisfactory” (S), or “needs improvement” (NI) for subjects like art, library, music, and physical education, in addition to grades that apparently compare them to their peers at “grade level” in all of those subjects as well as math, science, reading, and social studies. The grade options here are “above level,” “on level,” “developing,” “below level,” “met,” and “not evaluated.” Stay with me; I’m still talking about first grade.

So let me give an example. Turns out our son “puts forth [his] best effort” in art, library, music, and PE. Good for him! This translates to grades of “E” in each subject, except for music, where putting forth one’s best effort apparently just qualifies as “good.” Or maybe it means our son’s best effort is only good, which is a little more troubling, I guess. He’s also, it turns out, “advanced” in art and PE, but only “proficient” in library and music. I’m starting to see that music grade as a problem. What does it mean that his best effort is only good enough to be proficient in that class? Will he have the extracurricular heft he needs to get into a competitive college? We’d better schedule some lessons.

Anyway, the good stuff is in the second column. This is where the “real” subjects are assessed. Over there in that section, there are no effort grades. Who cares about effort in the real subjects? Either you know math or you don’t. Either you’ve mastered the 17 different sub-skills that determine proficiency in reading, writing, and listening, or you haven’t. Because science.

Still with me? We’ve got 11 subjects being assessed in first grade, including “first grade work habits,” which are assessed in a class called homeroom. We’ve got 15 different grade options that can be assigned, in some combination, in these subjects. We’ve got two separate domains in some subjects (a course grade and an effort grade), and then we’ve got 17 different sub-skills that are being assessed in reading, writing, and listening alone. There are also 12 grades given in homeroom assessing those work habits. In all, our son received 40 grades on his report card. I’m no math whiz, but I think that means his teacher determined somewhere in the vicinity of 640 grades for her class, just counting this quarter. Lucky for her other teachers teach art, music, library, and PE, or the number would be higher.

The good news for her, I suppose, is that she probably doesn’t have to do that much evaluating to arrive at those 640 grades. There are computers that will do it for her. In reading, for example, our son’s grade is determined based on the following criteria (these are copied directly from the report card) — I added his scores for fun:

His grades/scores, as you can see, are all over the map, and many of them are determined by how well he does on “diagnostic” tests. (Note: if a test score is being reported as a grade, it’s no longer just a diagnostic test; reporting it as a grade converts it into an evaluation. Just saying.) Piecing it all together, we have determined that our son has somehow overcome his deficiencies as a user of reading strategies and oral reteller of stories to nevertheless realize his potential as an advanced reader. This is exciting! How many people do you know with advanced spelling and vocabulary skills who read at an advanced level in spite of the fact that they use reading strategies poorly? How many do you know who are still developing the fluency skills of a first grade reader but reading at a second grade level or higher? How many do you know who can pass a “leveled” reading test above grade level but can’t tell a story back to the teacher at a level that’s even proficient for their grade? Well you know one: my son. I’m willing to bet he’s one of a kind.

In writing, our son’s grade is “basic.” As it happens, his writing skills are not even proficient for a first grader. This is a little confusing because his grades seem to be okay in the sub-categories — categories like “Spells Word Wall words correctly” and “Spells phonetically if correct spelling is not known” and “Puts appropriate space between words.” Of course even here the grades don’t make a lot of sense: his overall writing grade is on the “ADV-PRO-BAS-BEL” scale, but his sub-grades for writing are on the “E-G-S-NI” scale we last saw under “effort grades” in the “non-academic” classes. Huh?

Speaking and listening is the same way, except that there is no overall grade for these skills awarded on the “ADV-PRO-BAS-BEL” scale. My guess is that the district hasn’t found the right test to invest in yet that can ascertain a first grader’s speaking and listening skills relative to his or her peers in an efficient and scientifically rigorous way. But I’ll bet they’ll keep trying.

Really, though who are we kidding? The alphabet soup that passes as a first grade report card these days is as murky and opaque as the mashed potatoes my son had for dinner tonight. This is where differentiation starts: with a few short tests given in five-minute bursts to a room full of first graders, labels are already beginning to be attached. It would be one thing if the tests really told us what we think they tell us, but do they really? Moreover, “advanced,” “proficient,” and “on level” are words with precise meaning to the people who intended to have them describe what students know, but that precision can be lost when a teacher or school administrator sees hundreds of scores listed on a piece of paper or when a parent only sees them four times a year at report card time. Of course I was kidding when I said I lectured my son about college and career readiness after reading his report card, but it’s not hard to imagine that many first graders are being put under unnecessary pressure by their parents and others over grades of questionable academic value.

Their real value is in sorting kids. The people who invented these metrics would have you believe that they are simply trying to apply the insights of science and data and psychology to identify the kids who need the most help, and maybe they really believe that. But the practical effect of all this grading is that it confuses the work of teachers as they try to grapple with the conflicting signals given to them by test scores that may not even really be valid or reliable in the first place. How do you address a comprehension deficiency diagnosed by one test when another one says the kid in question is an advanced reader? You differentiate, of course, because you have to. Times twenty. Or, if you’re lucky and smart, you get yourself a special certificate and only teach the kids who don’t have comprehension deficiencies — or who took a different test certifying their need for a special services. You do whatever you can to bring coherence and clarity to a job that sometimes is maddeningly short on both.

Or here’s another idea: let’s pare down the number of grades, or, better yet, eliminate them altogether. I don’t live in the fantasy world were people believe that every kid in America has a great teacher; I know better than that. I also don’t live in the fantasy world where people believe that we can discover and diagnose reading deficiency as if it were a disease, then treat it like we would treat a disease too. Things are more complicated than that. But if we made the work of assessing what students know more manageable for teachers, we might find that the number of effective teachers proliferates rapidly. And if we started to recognize that the ability to read is connected as much to culture as it is to biology — and, more importantly, that kids don’t all learn how to read in the same way or at the same time, which makes the idea that their progress can be assessed in the same way at the same time seem pretty absurd — we might also find that kids are more skilled than we thought they were. And isn’t that what we were trying to assess in the first place?