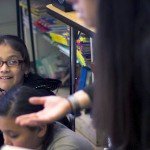 What’s so important about 3rd grade?

For parents, third grade is easily overlooked. But for experts, it's a crucial milestone and the reason why kids need to nail reading basics before that first day of school.

When Kimberly Campoverde, 8, arrived at P.S. 172 in kindergarten, she kept largely silent and teachers were unsure why. She spoke Spanish at home with her Ecuadorian family — but that wasn’t the reason. Teachers soon learned Kimberly had a severe stutter, which shook her confidence and left her so frustrated that she would throw herself against furniture in an effort to force the words out.

Now in third grade, Kimberly’s reading and language skills have improved in a way that is not just remarkable for a child overcoming a language barrier or a stutter. She’s a testament to a school’s effort against one of the most vexing problems facing educators today: the third grade reading hurdle.

From sounds to story

Being at grade level is meaningful at any age, but third grade is the crucial year when students make the leap from learning to read to reading to learn. It’s an academic hurdle that, if missed, can leave kids in the proverbial dust, struggling through letter sounds as their more fluent peers gain new knowledge at what seems like lightning speed. Once this type of learning lag exists, it’s difficult for kids to catch up. On a national scale, the third grade deficit takes on foreboding proportions: according to the Annie E. Casey Foundation’s analysis of 2009 NAEP data 83 percent of low-income students test below proficient in reading at the start of fourth grade, as do 55 percent of moderate- and high-income students, leaving the U.S. with a grim overall gap of two-thirds of children testing below proficient in reading.

The National Research Council links the problem to future failures: any child who’s not reading fairly well by the end of third grade is unlikely to graduate high school. Policy makers note big ramifications beyond the classroom, too, since poor readers tend to have more behavioral and social problems. So troubling is the third grade reading gap that public school districts in Florida, Chicago, New York City, and elsewhere have sought to fix it with policies that require any child whose reading isn’t on track to repeat third grade. (New York City and Chicago have backed away from mandatory retention policies, while Florida’s policy remains intact. Read what the research says about grade retention.)

In the hall outside Sara Levin’s third grade class, reading specialist Antoinette Coppa sits on the tile floor with Kimberly as she tackles a chapter book. Along with other struggling readers, Coppa coaches Kimberly page by page, phoneme by phoneme, helping in the painstaking task of connecting words to their meanings. Though Kimberly has special challenges, she is typical of many of the students at P.S. 172 Beacon School of Excellence (GreatSchools Rating 10), a preK-5 school on an unassuming Brooklyn thoroughfare that shows few sign of trendiness. She’s from a Spanish-speaking, immigrant family, struggles with reading, and has an individual education plan (IEP) for students with some type of disability. Almost 30 percent of students at P.S. 172 are English language learners and about 20 percent have IEPs, well above city averages. Four-fifths of P.S. 172’s students are Hispanic and more than 86 percent qualify for free and reduced lunch.

Unlike many high-performing schools in the city’s lower-income communities, P.S. 172 is a neighborhood school, not a charter or one that selects its students. (P.S. 172 can pick students from outside its zone to fill openings not taken by neighborhood children, and some have charged it seeks higher-achieving youngsters for those slots.) The school is not glitzy, housed in a old-fashioned, no-nonsense building. Although it has smart boards and is adding computers, it lacks a gym or an art room, and many rooms do double or triple duty.

Results for this year’s standardized tests are not yet available — and New York City School Chancellor Dennis Walcott cautions that this year’s scores will almost certainly go down because students in grades 3 through 8 took new tests geared toward the Common Core Standards — but in past years P.S. 172 has succeeded where others are failing. Last year, 85.5 percent of all third graders and 70 percent of third grade English language learners scored proficient on the state English language test. Compare that to New York City overall, where only 49 percent of third graders and a mere 18.7 percent of third grade English language learners scored proficient. In math, virtually all P.S. 172 students are proficient. These achievements have earned P.S. 172, designated a Blue Ribbon school in 2011, straight-A grades (with 102 out of 100 points last year) on city school progress reports. It’s also earned Principal Jack Spatola — who’s headed the school for 27 years despite a district that puts a premium on young leadership — $92,000 in bonuses since 2008 as part of the city’s merit-based pay system; his is the largest amount for any New York City principal.

In Ms. Levin’s third grade class, some students sprawl on the classroom floor during reading period, while others read quietly at their desks. Advanced readers cluster around an easel in the corner of the room discussing A Taste of Blackberries with a reading specialist, while Levin selects students to read to her individually for about 15 minutes each. Out in the hall, Coppa works with Kimberly and three other less-advanced readers, helping them grapple with Jake Drake, Bully Buster. Acknowledging the leap students need to make in third grade, Coppa concedes the book presents comprehension challenges. When it’s Kimberly’s turn, she reads the text quietly but smoothly. Reading fluently, answering questions in front of peers, and tackling chapter books are all new for her. But since the beginning of third grade, Kimberly has advanced several reading levels, and is approaching grade level now.

At the heart of PS 172’s success with struggling readers is its unrelenting focus on teacher observations and communication. As Coppa listens to Kimberly read aloud, she enters her observations into a notebook. There’s one for each child. “We take tons of notes on kids,” says Levin, and teachers share them. Even if there isn’t time for a meeting or full discussion, explains speech pathologist Andrea Abramowitz, “You have to find a way, even if it’s just a Post-It in the mailbox.” Using these notes, teachers adjust their instruction to fit each child.

Given the small size — 18 students — of Levin’s class, there’s a level of teacher supervision at P.S. 172 rarely seen in New York City public elementary schools. Principal Spatola uses a number of strategies to get more adults in the classroom. They a regular substitute; when she’s not filling in for another teacher, she works with small groups in regular classrooms. And while the school still pulls out students for special services, such as English language instruction or speech therapy, it more often “pushes in” providers of these services to regular classrooms, maximizing students’ access to teacher help, regardless of whether a child’s designated as a special education student, an English language learner, neither, or both.

“Each person has their specialty, so they (the kids) are getting the benefit of all of us,” says Anna Maria Rizzo, a special education teacher at P.S. 172 for about 25 years, who works in Levin’s classroom every day.

Spatola likes to say there are no magic bullets for success at his school. In the fall, staff assess where each student is, where they need to be in the spring, and what each student needs to get there — and assessments continue throughout the year. Progress rarely comes easy, and everyone at P.S. 172 speaks of the hard work. The school proffers a warm environment, social workers, and even a dentist to help students, but Spatola does not accept excuses for failure. “We start off with the clear belief that children will succeed,” he says. “Not that they have the potential, not that they may succeed, but that they will succeed.”

In cases like Kimberly’s, Spatola admits, “there are challenges.” But, he says, educators need to “look at all the structures and beliefs and say, ‘Wait a second. What else and how else do I need to do it?'” Despite the ongoing assessments and focus on success, P.S. 172 is relaxed and welcoming. Students don’t wear uniforms and often sprawl on the floor. Kids are at ease with teachers and Spatola. Attendance tops 95 percent, well above average. The work gets done; the results are measured; and the confidence in the system mounts. “Every effort we make as educators,” Spatola says, “is to make children believe that they can, not that they can’t.”

Kimberly’s stutter has not disappeared. Abramowitz has worked with Kimberly since first grade to develop strategies to deal with it. “She’s very aware of her stutter, but in a good way,” Abramowitz says. Kimberly says the strategies help her words come out “a lot smoother.” By all accounts, the girl who barely spoke in kindergarten has come a long way. Not only is she more confident and capable, says Levin, “She is not afraid to take risks.” Now, with strategies and a growing sense of competence, Kimberly — undaunted by the prospect of speaking to a roomful of students all day — says she wants to be a teacher.