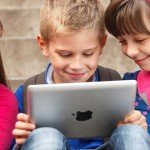 All eyes on iPad

The snazzy new gadget from Apple might be the ultimate AT device for my son.

At first glance I wasn’t jumping up and down at the iPad, Apple’s new, much-touted electronic tablet. What’s so great about a laptop without the cover, I wondered. But then I realized that it might be perfect for my 13-year-old with Down syndrome.

Aidan does well in school — he’s in seventh grade — but he has his struggles. Reading is not coming easy, and writing is no picnic either. Obviously, these deficits could hamper his ability to live independently and participate fully in the world. As a kid who needs and wants to be at the center of things, he’s not going to settle for the corner.

But as much as he struggles with reading, Aidan’s a wizard with the iPhone. He picked up his uncle’s iPhone one day, and without anyone telling him how to do it, he found and figured out every game app on it (and there were a lot). The touch screen and the apps are intuitive to him in a way that a keyboard is not. My only gripe is that the screen is so small. So now comes the iPad, which is essentially an iPhone on steroids. In this case, steroids are good.

The iPhone has a few apps for people who struggle with reading, including Dragon Dictate, a voice-recognition program. For those who have trouble speaking, Proloquo2 has text-to-speech capabilities, communications symbols, and a vocabulary of more than 7,000 words. It’s been hailed by the autism community as a great piece of assistive technology, and I’m sure others will find it useful too. I know that Proloquo2go is already planning to migrate to the iPad, and I’m guessing most other apps will follow.

Once in Aidan’s hands, other apps could quickly become indispensable: The GPS could help him if he gets lost, he could use Speak it! if he can’t read the text on the screen, and Dictate will help him make lists. And I know he won’t stick with just those — I can imagine him using one of the restaurant apps to find every hot dog stand and pizza joint in a three-mile radius.

With new apps being developed daily, I’m going to be checking in regularly at Ability Net’s page on iPhone apps.