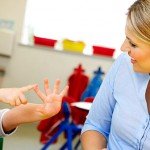 Your kindergartner and math under the Common Core Standards

It's the year to learn basic shapes, special words, and a little counting, adding, and subtracting.

From the first moment they look at your cooing face, babies start trying to make sense of their new reality. They’re hungry, they cry, and food arrives. In its most rudimentary form, they’re learning the essence of mathematics: logical thinking and problem solving.

By the end of kindergarten, your child should be able to:

Kids love to show you what they’ve learned, and there’s plenty to be proud of in kindergarten. Your child will learn to identify and write numbers from 0 to 20. Ask them to point to the number that shows how old they are. They’ll be able to count to 100 — the long way saying one number at a time — and the short way skipping from 10 to 20 to 30 and so on. They’ll answer questions like, “what’s after 73?” and “what’s the number before 15?” They’ll understand that the number 3 is bigger than the number 2 and that 49 is smaller than 50, which comes after it.

Giving and taking away

Kindergartners learn to add and subtract within 10, but not with a pencil and paper. They’ll use objects and drawings. If there are 7 toy cars in a pile on the floor and one is removed, how many are left in the pile? If Juan has 4 cookies and Michele has 2 cookies, how many cookies do they have together? It gets a bit more difficult when they’re asked how many more cookies would they need for a total of 9, but that’s okay, because that’s pretty advanced. Also, some kindergartners will understand the equations for addition and subtraction, such as 6 + 3 = 9, but it’s not essential this year.

In kindergarten, kids learn that numbers between 11 and 19 are made up of 10 plus some ones. They understand that 12 is the same as 10 and 2 more. Their teacher will use different objects to explain this, such as a giving students 16 beans and having them create one pile of 10 plus 6 individual beans. This is the first step on their path to understanding place value.

Children already see the world as things that are the same and things that are different. Kindergarten is a key year for measuring, classifying, and comparing, both developmentally and in math. Your child may sort her toys into groups of animals, board games, and trucks or arrange her stuffed animals from tallest to shortest. The good news is, when your child upends a dish full of seashells onto the floor to sort the pink ones from the white ones, you’ll now know he’s practicing important math skills.

Students learn to compare two objects by their length, weight, and size. Who’s taller, my best friend or me? Which is heavier, this hollow ball or this solid rock? Remember when your parents marked your height on the doorjamb every year so you could see how much you grew? If you’re not doing that now, go ahead and start. It’s a great learning tradition to continue with your children.

Your kindergartner should learn to identify the four basic shapes: circles, triangles, squares, and rectangles. During the year, kids learn to differentiate triangles from rectangles, and rectangles from squares. They learn to sort shapes into groups according to their similarities and count how many there are in each group.

One of the most important concepts in kindergarten is following directions, such as put your lunch boxes inside your cubby, shoes go into the basket, put your painting next to Ida’s, and please stand behind John in line. These words are new to kindergartners. They indicate where thing are in space. Not only are they crucial for doing what the teacher asks, they’re also important math terms. Other words your child should learn sooner rather than later? Below, above, beside, in front, on top, and under.

Enjoy this time as your little one revels in counting, comparing, and shapes. Before you know it, they’ll be studying radian measures of angles traversed counterclockwise around a unit circle, and you’ll be longing to add and subtract with cookies.

Print out our favorite five math worksheets for kindergartners.