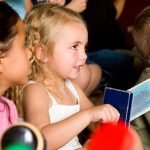 Your kindergartner and music

In your child’s classroom

Your child will sing, play instruments and move to music in kindergarten. She learns to keep a beat and tell the difference between loud and soft. These activities introduce her to the artistic, cultural, scientific and mathematical foundations of music.

Research has shown that the benefits of music education include improved reading and reasoning ability, self-esteem and vocational preparation. Paul Bakeman, our teacher consultant and award-winning music teacher, adds: “Recent research done at the University of California, Irvine, indicates that young children involved in consistent music instruction have a greater ability to grasp concepts that are also essential to the understanding of math and science.”

Music may not be taught as a separate subject in some schools, but most states require that it be included in the curriculum. Most states have music standards that are based on the National Standards for Arts Education.

Kindergartners sing songs with words and melody patterns that are repetitive and easy to learn. Many songs will be connected to the holidays. Others reinforce what your kindergartner is learning in class, such as counting, colors or the alphabet. Typical songs include “Lucy Locket,” “Doggie, Doggie, Where’s Your Bone?” “Aiken Drum,” and “Snail, Snail.”

Your child develops his voice by singing alone and learns to blend his voice with others by singing in a group. He learns to sing expressively, on pitch (high and low) and with correct dynamics (loud and soft). He can sing songs from memory. He creates simple songs with the class based on stories and poems. The class plays singing games that combine music and movement.

Singing can also help a child learn to read. Kindergartners practice rhyming words in “Down by the Bay,” spelling in “B-I-N-G-O” and vowel sounds in “Apples and Bananas.”

Kindergartners play musical instruments, such as rhythm sticks and drums, individually and in a group. Your child is likely to work with rhythm to find a steady beat.

“Finding and keeping the steady beat is a basic musical skill that kindergartners spend plenty of time practicing,” Bakeman says. “It is an important skill that lays the foundation for instrument-playing in the future.”

Your child will be able to copy simple rhythmic patterns played by the teacher. The class may make simple instruments, such as drums and shakers, out of found objects. Kindergartners can classify instruments into groups according to how the sound is produced: metal, wood or skin (drum).

“A great way to practice the steady beat and counting skills is to beat out numbers of things in a group of objects, like one apple, two oranges, three carrots and four tomatoes. Kindergartners can also practice adding numbers together and then playing the answer as a steady beat,” Bakeman says.

In a rich music program, kindergarten students develop a beginning recognition of musical notation. They learn to read simple musical notes and use invented symbols to represent a beat. Bakeman explains: “An ‘invented symbol’ could be anything that represents the beat. For example, I could use bird picture cards to represent the invented symbol. I would place eight bird cards on the board. As I point to each card the students say ‘chirp.’ Then I remove a few bird cards and explain that sometimes in music we have sound and silence. I then draw a quarter rest in the place of the removed bird card, and we practice saying ‘chirp’ for each bird card and then remain silent for the rests.”

You can expect your kindergartner to be exposed to many different kinds of songs with different beats and rhythms. He learns to develop an ear for beat. He responds to beat, rhythm and qualities of music, such as loud and soft, and fast and slow. Your child skips, hops, marches, claps, tiptoes, steps to the beat and makes creative movements to music, showing her understanding of rhythm, beat and the feeling of the music. She may use props, such as scarves, along with the movements.