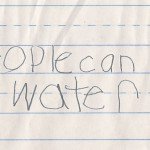 Writing goes from zero to 60 in kindergarten, from tracing the ABCs and culminating in higher-level thinking skills like forming, organizing, and expressing complete thoughts.

Aside from decorative swirls, a few letters, and perhaps even their own names, most kindergartners start school not knowing how to write. That’s the point of school, after all… right?

In a word, yes. You may have heard that kindergarten is significantly more academic under the new Common Core State Standards — and it’s true: the kindergarten writing standards include scary terms like “research” and “publish.” But don’t panic. Kindergarten is still the year children first learn about writing, which means learning to listen, speak in class, and write the ABCs.

Teachers often start the year by introducing the letters of the alphabet — the building blocks of writing. Kindergartners learn how to form the shapes of letters, what sounds they’re associated with, and how to combine those letters to create words.

This year your kindergartner should learn to print “many” (yes, the new standards specify “many,” not “all”) upper and lowercase letters.

At many schools, kindergartners are encouraged to spell words the way they sound, which is known as phonetic or “invented” spelling. For example, a student might spell the word water by writing “watr.” Children are often more comfortable using consonants and sounds at the beginning of words because they’re more distinct than vowels or sounds at the ends of words. Using invented spelling, children are demonstrating what they know. Research shows letting children use invented spelling (and not immediately correcting them) allows them to focus on the purpose of writing: communication. Typically, kids learn the rules of spelling and transition to conventional spelling as they read and write. (If a child’s spelling does not improve or their invented spelling is arbitrary rather than phonetic, it could be a sign of a learning issue.)

By the end of the year, kindergartners should be able to:

• Connect most letters with their sounds.
• Phonetically or inventively write simple high-frequency words. (See our kindergarten snap words worksheets for examples of high-frequency words to practice, and check out this real-life example of what a kindergartner’s invented spelling looks like.)
• Write many consonant-vowel-consonant words, like cat, dog, mom, and dad. (See our kindergarten rhyming words worksheets for examples.)
• Write their own names.

Kindergartners who can’t read or write yet, can…

Listen, speak, and draw! Think of these skills as big steps toward writing. Teachers and parents should read books aloud and should ask questions along the way about the book itself — the title, author, illustrator, subject — and about what happens in a story, and what your child notices about events and characters’ actions. Be sure to ask some questions that require your child to read between the lines, e.g. Who are the main characters in this story? Where was the frog sitting? Why do you think the dog is sad? Can you draw a picture to show something interesting that you learned? You can also ask questions about the illustrations.

When answering, your child should learn to use frequently occurring nouns and verbs and correctly use the most common “connection words” or prepositions — such as to, from, in, out, on, off, for, of, by, and with — to express their thoughts. They should also learn to answer questions using simple, complete sentences. Kindergartners also need to understand and use question words, including who, what, where, when, why, and how, when they speak or dictate writing so they’re familiar with these words when they begin writing on their own.

What exactly is “research” in kindergarten?

Your child’s first experience with research projects will be listening to a few books by the same author or on the same topic. Students will be asked to recall information like the author’s name, and what they learned from the reading. Then, with help and prompting from the teacher, they may draw pictures to accompany dictated sentences or write one to three sentences about what they learned from these books.

Watch how kindergartners research and discuss a topic

Kindergartners should practice and learn three kinds of writing: opinion, informative, and narrative. All three will likely start with kids listening to books read aloud and responding to what they’ve learned. In an opinion piece, your child tells the reader his opinion or preference about a topic, such as a book, animal, activity, etc. (e.g. My favorite book is...). In an informative piece, your child names what he’s writing about and gives some information or details about it. (e.g. Dinosaurs lived on Earth a long time ago…) Writing a narrative is like writing a story. Your kindergartner will describe an event — or a few loosely linked events — putting the events in the order they happen and reacting to what happened. (e.g. Then Goldilocks tried the second bowl of porridge.)

By the end of the year, your child may be able to write a couple of sentences for each type of writing. Remember that drawing and dictating sentences count as writing.

A big part of teaching kids to write well is helping them understand that writing is a multistep process. Before your child picks up a pencil, prewriting begins with reading and thinking. This may mean rereading a book, discussing what your child has read, or simply brainstorming ideas for a picture or story. Then, the teacher will likely to go over your child’s first draft drawing, dictation, or writing with your child. The teacher or other students might ask your child questions about the work — and suggest details that could be added or better ways to organize information. Then your child may be asked to do a revision. After one or more revisions, the teacher might help your child with the final edit — focusing on spelling, capitalizing proper nouns and the first word of a sentence, and adding a period at the end. These steps — preparing to write, doing a first draft, revising that draft, and editing the final piece — help kindergartners learn that gathering and recalling information, organizing their thoughts, strengthening and clarifying their ideas, and improving grammar and presentation are all important parts of writing.

Check out these related worksheets:
• Sentences #1
• My first sentences

In kindergarten, the focus is on printing upper and lowercase letters. Because kindergartners’ motor skills are still developing, the teacher will introduce handwriting with a range of approaches, like finger painting, writing in the air with a finger, and tracing letters. Kindergartners should learn how to hold a pencil and practice forming letters by writing their names, which gives them practice writing letters, shaping and spacing letters correctly, and writing from left to right.

For handwriting practice, check out these related worksheets:
• Creating letter-shape patterns
• Practicing letters a and b
• The alphabet

Updated November 2013 to align with the Common Core Standards