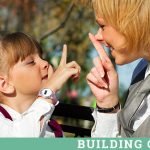 Has your child heard you tell any of these “harmless” fibs? Experts say you may be teaching your child that lying is okay.

I already gave to your organization. It’s no trouble at all to feed your cat while you’re on vacation. We have plans that weekend. I won’t have time to stop by this afternoon.

That last one was said during a phone call with my dad, and generously speaking, I was stretching the truth. I had time. I just didn’t want to spend it stopping by my dad’s. When I noticed my son eyeing me suspiciously as I ended the call, I hastened to explain. “I want some downtime this afternoon,” I said, “and I didn’t want to hurt his feelings.” My son was nonplussed and I was chastened. We think of so-called “little white lies” as harmless, but what about when our kids hear us tell them?

By the most conservative estimates, the average American adult lies at least once a day. Most of these lies are benign; they’re called “prosocial lies” by researchers because they smooth our interactions with others, making our lives easier and helping us avoid conflict. We tell them to avoid hurting someone’s feelings (I already have plans), to excuse our own behavior (I’m late because the traffic was terrible), and to make someone feel better (I can hardly see that pimple). Most of us don’t put these kinds of lies in the same category as lies that cause obvious harm to others or break laws. One survey found that the majority of adults don’t consider “white lies” to be lies at all.

So maybe you don’t think twice when your child hears you tell a friend that you love the gift they gave you, or the cashier at the movie theatre that your just-turned 13-year-old is 12. Maybe you’ve told your child they can’t have ice cream because you don’t have money with you, rather than open the door to an argument about sweets before dinner. But when kids hear adults lying, research suggests they’re more likely to lie themselves. A study done at the University of California, San Diego found that 5- to 7-year-olds who were first told a lie by an adult were both more likely to cheat and then more likely to lie about it afterward.

When it comes to kids and lying, conventional wisdom has been that young children outgrow lying as they learn the difference between lying and telling the truth. But research — not to mention our own lie-telling behavior as adults — reveals otherwise.

Kids tend to be blunt truth tellers when they’re between the ages of 2 and 3. By about age 4, most children tell lies, usually to avoid getting in trouble. Prosocial lying, or lying to avoid hurting someone’s feelings, develops around the same time or a little later, as empathy develops, says Victoria Talwar, associate professor in the Department of Educational and Counseling Psychology at McGill University in Montreal. Talwar, a leading researcher on the development of lying in children, found that while 72 percent of 3- to 5-year olds would tell a white lie, 80 percent of 6- to 8-year-olds and 84 percent of 9- to 11-year-olds told white lies. Essentially, kids lie more — and get better at it — the older they get. It’s a skill they learn, at least in part, Talwar says, by observing the behavior of the adults around them.

“It’s one thing to say to kids that honesty is important,” she says, “but then if they see you lying, it sends a mixed message.”

When kids hear us lie, the implicit message is that sometimes lying is okay. And then there are the times we explicitly encourage our kids to lie — about liking a gift, for example. We all want our kids to be honest, but we tend to be proud when they tell a polite lie to avoid hurting someone’s feelings. And for good reason — the ability to lie is a developmental milestone associated with intelligence and social sophistication. Picture your second grader opening a dictionary from well-meaning Grandma. Of course you’re pleased and proud if he convincingly says he likes it.

But these sanctioned falsehoods come at a cost.

“Encouraged to tell so many white lies, children gradually get comfortable with being disingenuous. Insincerity becomes, literally, a daily occurrence. They learn that honesty only creates conflict, while dishonesty is an easy way to avoid conflict,” writes Bronson in Nurture Shock. And, he concludes, it’s a slippery slope from small polite lies to telling other kinds of lies.

We want to raise honest children. We also want them to be socially adept and sensitive to other people’s feelings. And as parents, surely we can be cut some slack for sometimes wanting to make things a little easier on ourselves. Is there a truth-telling prescription that accomplishes all of these ends?

“We want to teach our children to be honest, but we want to teach them to be kind as well. We need to teach honesty in a way that potentially helps others rather than potentially hurts others,” says Talwar. She recommends that parents model and teach what she calls “strategic honesty,” which she describes as being honest without hurting the person with the blunt truth. It’s a similar strategy, she says, to praising the action rather than the result when talking with kids.

“When a child brings us a scrawled drawing they’ve made, we don’t tell the child, ‘Your drawing is a big scribble.’ You discuss the details. You say, ‘I like how you used the color yellow.’”

In the case of a gift, try finding something nice to say about it that feels honest. Rather than, “I love this sweater, I’m going to wear it every day,” maybe you say how soft it is or that it looks warm.

The reason we don’t use strategic honesty more often, Talwar says, is that it’s more work. For sure, it would have taken a little more effort — and perhaps invited conflict — to tell my dad, “I want some time at home this afternoon. Can I come next week?” Or to tell the person on the phone, “I am not interested in donating to your cause. Good luck with the rest of your calls.” Or my friend, “I’m late because I didn’t give myself enough time to get here. Thank you for waiting for me.”

While it may feel like more effort in the moment, there are good reasons for teaching kids how to get along in the world without making a habit of relying on small lies — and for telling fewer of them ourselves. Studies show that lying takes a toll on our mental health, leading to anxiety and depression. “Even the lies we call prosocial can have negative consequences,” says Angela Crossman, professor and chair of the Department of Psychology at the John Jay College of Criminal Justice at City University of New York. “They can backfire. Your credibility can come into question.”

Even kids recognize that telling the truth just feels better. Talwar’s research found that telling 9- to 11-year-olds that they would feel better about themselves if they told the truth decreased the chances they would tell a lie. And as Talwar points out, none of us likes to be lied to—even politely. “If you think about the people in your life who always tell you the truth, those people are really valuable.”

If you catch yourself telling a lie in front of your kids, treat it as an opportunity, says Dr. Peter Stavinoha, a clinical neuropsychologist and author of the Stress-Free Discipline series of parenting books. “I’m a big advocate for parents stating what was in their head at the time. Let your child know why you said what you did.” And if you want to really spark discussion, he says, ask if they have ideas for what you could have done differently.

“Kids really like to engage if you say, ‘Wow, I really could have handled that better. Can you think of any ways I could have?’ That’s a very non-threatening way for a child to problem solve.”

Recently my son was invited to a sleepover where the kids, middle school-aged boys, were going to be watching movies. He is sensitive to violent movies, even ones most kids his age love. I wondered if he would tell the other boys he was busy that night. It’s what I probably would have done. Instead he told them he “didn’t do” violent movies. Would they consider watching a comedy? To my surprise they agreed, and when another sleepover party invite came the next week and the boys opted to go with a gory sci-fi movie, my son was comfortable saying he’d pass — no lie necessary.