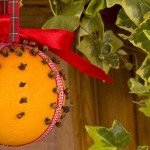 Help first- and second-graders celebrate the holidays (and learn about the spice wars!) with delicious-smelling decorations.

Food isn’t always just for eating. These two spice-based crafts offer kids the chance to play with their food while taking in a history lesson. Savor the aroma of cloves and cinammon, and embark on a seasonal art project first- and second-graders will love.

The project: Get a spicy history lesson from holiday crafts

Traditional holiday spices like cloves and nutmeg have a surprising history, and at one time a few nutmeg seeds were so valuable to the Dutch that they traded Manhattan to the British for a tiny Indonesian spice island called Run. The demand for exotic spices became so intense during the 17th century that war broke out between the colonial forces of Holland, England, and Portugal over control of the Banda Islands in eastern Indonesia. The body count? Six thousand people. Ask your child if he or she can imagine fighting over any food.

The story behind pomander balls is equally intriguing: When the bubonic plague swept through Europe during the Middle Ages, people attempted to curb the spread of the disease by sniffing these aromatic ornaments for protection. In Victorian times, they became a popular way to ward off a more innocuous pest — moths — and spruce up Christmas trees.

Inspire your child to get creative by trying his or her hand at pomanders. Then, with nothing but the classic combo of apples and cinnamon (OK, and also glue), he or she can make an almost endless assortment of fragrant ornaments and decorations for the season.

Orange-clove pomanders
Make holes in the orange using a pushpin or sewing needle, and have your child fill them with the whole cloves. Once the orange is completely studded, tie a ribbon around it for hanging. (Variation: Instead of an orange, try substituting an apple, a lemon, or even a kumquat.)

Apple-cinnamon dough ornaments
In a bowl, mix the cinnamon, applesauce, and glue until it gets to be the consistency of cookie dough. Remove the dough from the bowl and knead it, then return it to the bowl, cover with plastic wrap, and let sit for at least 30 minutes.

Remove the dough from the bowl and knead it again. Then roll out the dough between two sheets of waxed paper. When it’s about a quarter-inch thick, cut the dough into shapes and use a straw to make holes for hanging them with string. Place the ornaments on a strip of waxed paper and dry for three to five days, turning as needed.