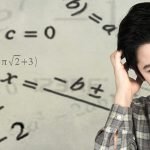 Research confirms what we often see in our own homes: when a parent fears math, they can pass that fear along to their kids like a cold.

“It’s your fault, Mom,” my son told me the other day, after complaining about how hard he was finding his honors math class. “I inherited your bad-at-math gene.”

He was teasing — but not entirely. Since my kids have graduated out of simple division and multiplication, I’ve greeted their math questions with dismay. When one of them approaches me with a math sheet, I’m ashamed to say that I actually experience fight or flight symptoms. I get butterflies in my stomach, and feel a rush of fear; when they press me for help, I even get a little angry. Luckily, their father is good at math and can usually help.

When it comes to other types of homework, I’m perfectly rational — whether I’m familiar with the subject or not. When my kids have a difficult science question, or are having trouble conjugating a verb in a foreign language I’m unfamiliar with, for example, I work with them to help them figure out or find the answer — and I learn something new in the process. With math, I’m afraid to even try.

I never liked math, but I was a competent math student until middle school. Then, all of sudden, math became much more difficult. I had the same teacher two years in a row. She wasn’t good at explaining the concepts we were studying; she was also touchy and tedious. I tuned her out a lot, and then really had no idea what she was talking about. I began to dread math, and after that, I did everything I could to avoid it — which was easy at the alternative high school and college I attended, where there were few math requirements. I happily filled my schedule with humanities, philosophy, and political science classes instead.

It’s no wonder that I’m not comfortable with math: I haven’t used the math part of my brain in a long time. In retrospect I wish I’d framed it for my children that way: instead of fleeing every time they asked me for math help, I wish I’d just told them that my math skills are rusty, or even taken a math class or two to fill in some of the gaps. I wish I’d modeled more confidence and competence for my children. Because now all three kids say they don’t like math, either.

Education experts warn parents not to communicate their math anxiety to their kids; there’s evidence that both teachers and parents can pass their fears on to children.

And it’s true: there’s evidence that confidence can play a role in math success. A recent study by psychologist Sian L. Bielock at the University of Chicago found that students with high math anxiety tend to perform less well on math tests than students who aren’t anxious — but it also concluded that some anxious students were able to regulate their anxiety, and perform well inspite of it. (For more details, see the study itself and also an excellent blog on the subject here.)

Now I have to do what I can to help my kids overcome their math fears (and my bad role-modeling), and I have a lot of homework to do…