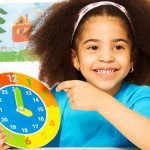 Have you ever snuck vegetables into your kids’ meal? Toss some greens into the blender, and presto! They never even knew they ate a quarter pound of kale in your (wink, wink) "cheese and meat" lasagna.

Take a similar stealth approach with math, which all too often — like those poor maligned veggies — gets a bad rap. Whether you’re at the grocery store or a ball game, filling up at a gas station, or at home, numbers and math puzzlers are everywhere. So seize the math moment with these seven simple and amusing ways to sneak numbers into your children’s educational diet. (They’ll be having so much fun, they won’t even know it’s good for them.)

One, two, three strikes, you’re out!

Peanuts and popcorn, sure, but math at a ball game? Absolutely! Sports are a numeric gold mine. So when you find yourself watching a game — live or on TV — encourage your children to play with the numbers. Start working out your kids’ math muscles by asking them to identify the shape of the soccer field, basketball court, football end zone, or baseball diamond. Then up the math ante by asking, “How many points does the losing team need to catch up?” or “How long does each half or quarter of the game last?” or “How much time is left on the clock?”

Remember: You don’t need a live sports match to talk about math. Look at the baseball box scores in the newspaper or basketball statistics online, and ask your children to add up how many hits each player got or the difference between two players’ rebounds.

For older kids: Have children who like following the stats do some hard-core (number) crunches with math mind twisters like “What’s your batting average if you got 32 hits in 96 at bats?” or “What’s your free-throw percentage if you make 15 out of 20 shots?” or "If the football field is 300 feet long and 160 feet wide, what’s the total area of the field?"

As any master chef knows, without a solid grasp of math, your recipe is, uh, toast. So enlist your wee Rachel Ray and Jamie Oliver to help whip up a dish, peppering your cooking fun with lessons on measurement and size.

Baking, even more than most cooking, requires true precision. So whip up a batch of brownies or chocolate-chip cookies, and let your children measure the ingredients. (By the way, try your best to throw aside worries about flour on the floor. You and your kids can clean up the mess — and there will be one — later.) Throw in an extra dash of education by asking, "How much is two and a half cups of sugar? Three-quarters of a cup of vegetable oil? Two and a half teaspoons of baking powder?"

You can also have your kids do simple addition and subtraction exercises while setting the table: "We usually have four place settings, but Grandma and Grandpa are joining us tonight. How many settings do we need total?" Or "If everyone gets a fork and a knife, how many utensils are on the table?"

Pump up the math

While you idly stand there filling ‘er up, and bemoaning the cost of fuel, why not invest in your children’s future by pumping them full of mathematical thought twisters?

Tell your kids how much gas the tank holds and how much is left. (Psst! It’s OK to guess or make it up.) Then help them figure out the difference: "If there’s only a half gallon in the tank, and it holds 12 gallons, how much do we need to fill it up?" Talk too about traveling and mileage, giving your children a simplified math problem and helping them work through it: "If we go one mile each minute, and Uncle Artemis’s house is eight miles away, how long will it take to get there?" If you tend to travel by bus or subway, look at the schedules and talk about the time between trains or how long it will take the bus to get from one stop to the next.

For older kids: Use the gas pump to calculate your car’s mileage. Set the odometer when you fill up, and when you refuel, help your children figure out how many miles you got per gallon: "We traveled 323 miles before filling up with 9.2 gallons. How many miles did we get per gallon?" From there, you can talk about what factors affect your mileage: "How much weight is the car carrying? How fast are we traveling? How much are we sitting in traffic and idling (burning fuel without moving forward)?"

Rev up your kids’ math motors with this license plate number game that sharpens basic computation skills — and keeps that most annoying of car trip whines (“Are we there yet?”) at bay.

For older kids: Try the game above, but have everyone add the first two numbers in the license plate, then multiply by the third number and subtract the fourth. For carloads of various ages, you can apply different rules to different kids to keep it fair.  For instance, kids up to 8 might add all the numbers, kids 8 to 12 might begin by multiplying the first two numbers and adding the rest, and teenagers and adults can subtract the first two (probably leading to a negative number) and add the rest.

Board games take the "boring" out of math by using playful competition to teach concepts like simple subtraction and more-complex multiplication. For young children, help them move their markers forward and backward by the correct number of spaces. (Chess is a great game for this: It’s suitable for any grade level and boosts kids’ math and critical-thinking skills.) For older elementary and middle schoolers, whenever possible, let them be in charge of keeping score and counting money. Play it on enough family game nights, and Monopoly will turn your underage board player into a financial genius.

Card games are another way to introduce kids to the devilish joys of calculation. Uno is a simple game (requiring its own deck) that children 4 and up and adults can enjoy together — it will introduce younger kids to basic number sense and older grade schoolers to more-complicated strategies.

For older kids: Though teens may not jump for joy when you suggest a rousing game of Go Fish, some of the more sophisticated card games — like poker, gin rummy, Spit, or bridge— should keep their interest (and their mental muscles flexing).

You may feel you never have enough time, but at least time is overflowing with math challenges. Start with the basic "game" of telling time: Most children over 7 should be able to tell time in hours and minutes (now that analog clocks — with hands and faces — are rare, they are harder for kids to learn than digital). So when you pass a clock, ask if they know the time, and if they don’t, clue them in. You can also turn time into a game by asking kids to guess how long they think it will take to reach your destination on a walk or drive. Whoever guesses closest wins. (Find games and worksheets to help children learn how to tell time at websites like Time for Time and About.com.)

For older kids: Estimate walking speed — first ask children to guess how far away, say, the park is by measuring a smaller distance (one sidewalk square, for example). Then have them estimate how many sidewalk squares are in one block, and how many blocks it takes to get to the park. So if it takes three seconds to walk one sidewalk square, and there are 20 squares per block, it would take 60 seconds to walk a full block, or a block per minute. If the park is about 10 blocks away, it should take 10 minutes to get there if you’re walking a block per minute.

To take it further, check online to find out how many blocks are in a mile (it depends on what town or city you’re in, so go to a site like Google Maps to figure out the length of the blocks you are walking), and then calculate your miles-per-hour foot speed.

“I don’t want to go to the grocery store! It’s so boring!” Chances are you won’t hear this plaintive supermarket lament if you make shopping a numbers game — and give kids some responsibility to boot.

Head straight for the produce section, where kids can happily make use of the grocery’s most useful math toy: the scale. Tell your children what you need and how much: “We need four pounds of corn.” (For really young kids, they can put it in the scale, and you can read the weight for them.) “Oops, that’s only two and a half pounds. How much more do we need?"

As you meander through the other aisles, use food prices to teach your children about units of money. For younger kids, ask, "This chicken costs $6.59. Is a $5 bill enough to pay for it, or do I need a $10 bill?" For older kids, make it more complicated: “This chicken costs $6.59. If we’re paying with a $10 bill, how much change would we get?” While most people pay with credit cards these days, try using cash once in a while — and letting your kids pay the cashier — for a handy lesson in making change (all the while teaching them this motto: Change is good).

They can also compare nutritional information: Take two cereals, for example, and multiply the sugar per serving in each by the total number of servings in the package to see which has more total sugar. Score two points for parents: Your children get a nutritional and math lesson in one!